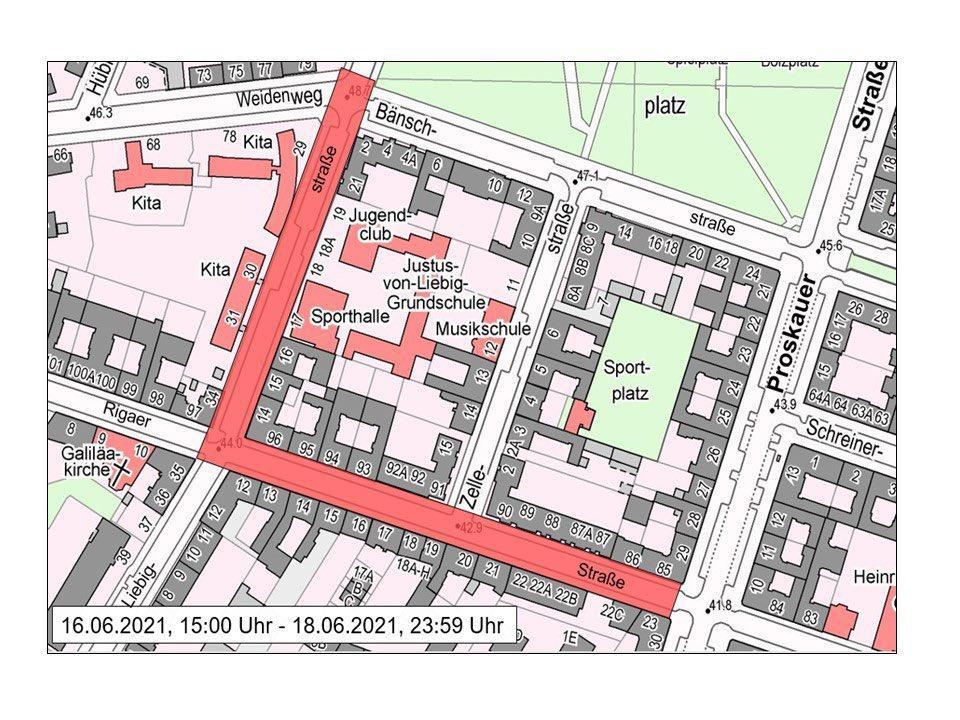 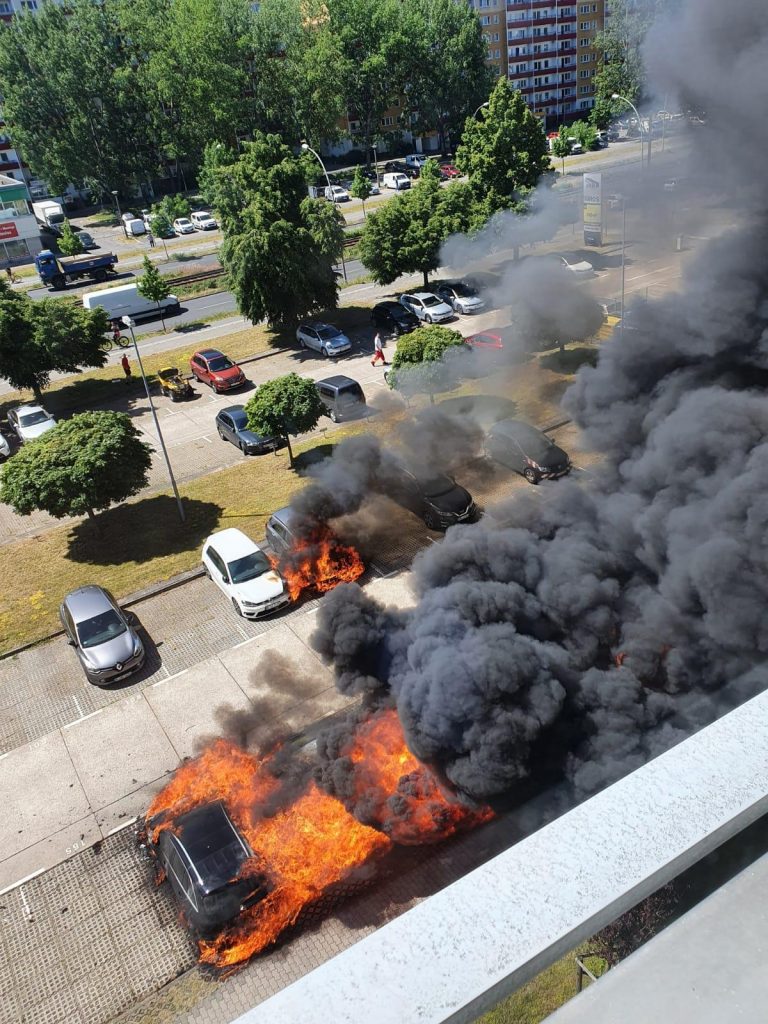 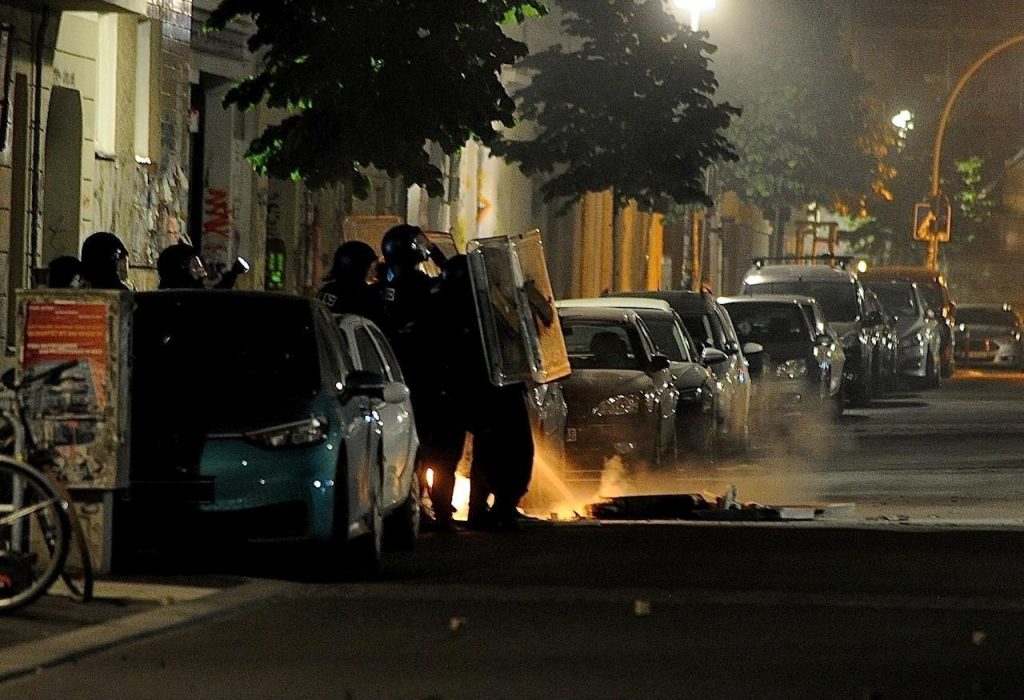 16.6.21 Some rough updates from the last days. The red zone around Rigaer94 was anounced by police to start today. But the defence started before.

In the night to June 10, a trashbin was set on fire in Rigaer Street. Arriving firebrigade and police were attacked in an ambush with around 50 stones. The last days saw many solidarity attacks all over Germany.

In broad daylight, the company of fire protection assessor, which will enter the house tomorrow on behalf of the „owner“ and the police, to the eviction or destruction of Rigaer94, was attacked with fire. 8 of their cars are burned in front of their office.

Today, barricades are build around Rigaer Street and defended with stones and fireworks against police. 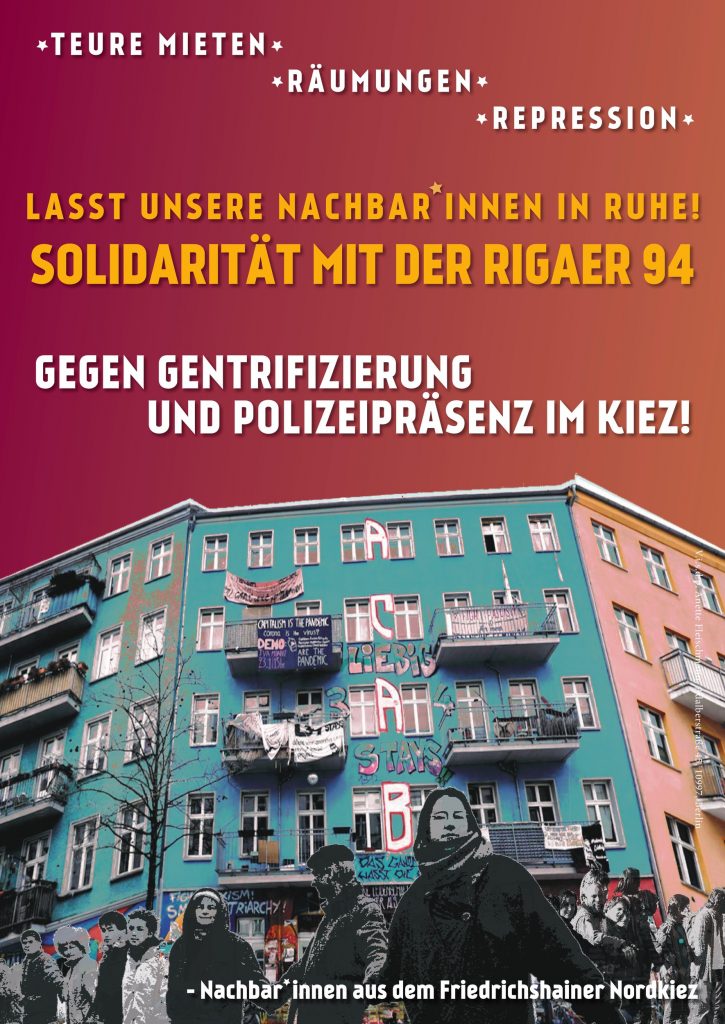 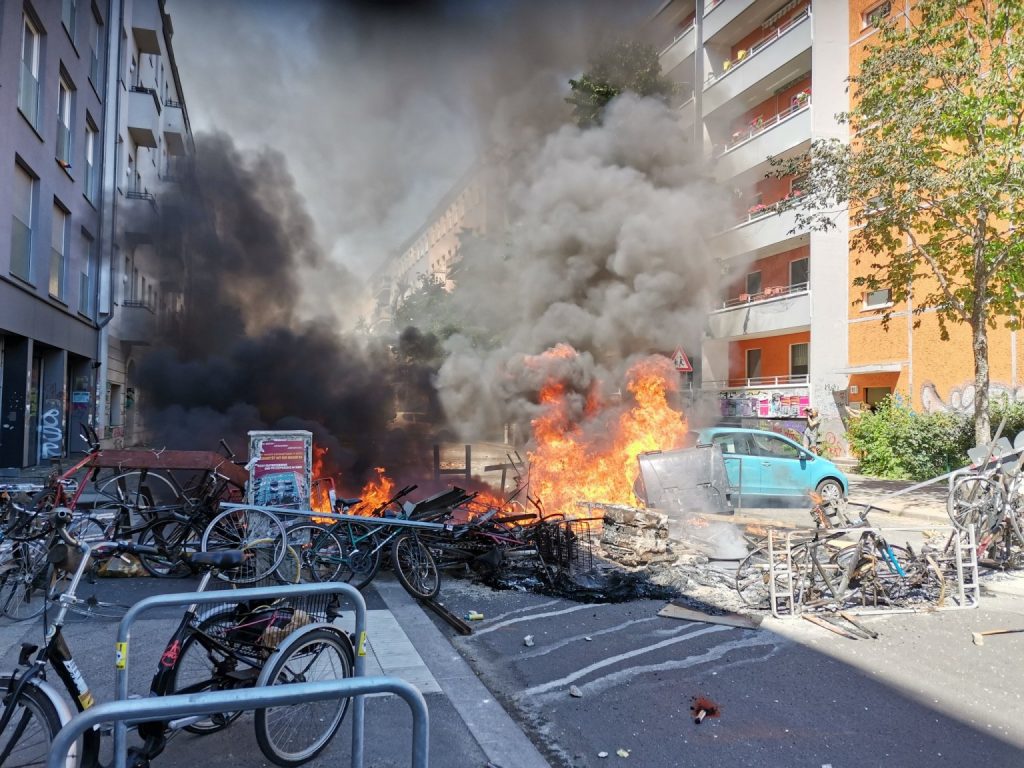 Berlin. During the morning hours of June 16, Rigaer Street including Dorfplatz (village square) to Zellestreet was occupied by a large number of people. On each side, a major barricade made of tires, barbed wire, construction site material and garbage containers was erected shortly before 11 am. In addition, there was a burning tire in front of each.

As larger police forces approached around the area, the main barricades were also set on fire. Soon defensive action was taken with stones and fireworks against smaller advancing helmeted units on foot. The latter thus halted their advances again for the most of the time. For the next two to three hours, no viable attempt was made to take the barricades. Every step forward on their part was stopped by throwing at them. The time was used by an increasing number of people inside the area to reinforce them and provide additional material for defense. Outside the occupied zone, too, the number of people increased and slogans of solidarity were raised, batteries of fireworks were set off in adjacent streets, and barricades were erected on other streets as well. The scenery in the Nordkiez was characterized by clouds of black smoke and the sound of fireworks coming from Rigaer. The former Liebig34 was covered in black smoke and some of the new windows were broken spontaneously. A slowly growing police force gathered all around. After about two hours, the first out-of-town units, which had probably been ordered beforehand, arrived. Shortly thereafter, at about 12 o’clock, it became known that water cannons and armored clearing vehicles were on their way along Karl-Marx-Allee. The situation had become static, a rare, exciting situation in these times.

The whole thing could no longer be solved other than by using heavy equipment. That’ s what happened a little later. Water cannons approached the burning barricades from the east and west, extinguished the fires and cooled the melted asphalt. Then, with the tanks in the lead, they started to advance into the contested territory, where some surrounding balconies were still being pelted with water. A little later, the otherwise so self-confident foot troops hesitantly came around the corners and fought their way into the building entrances opposite to Rigaer94. The fireworks reached a climax once again before the temporary autonomous zone was completely dissolved and the neighborhood was subjected to the total control of the police apparatus, almost in accordance with the official schedule. According to initial assessments, there were no arrests. Further reports of the upcoming events surrounding the Red Zone and the alleged fire safety inspection of Rigaer94 will surely follow.