This is an incomplete list of publications from our sister project and those we feel are interesting enough to host. If you produce a publication that you think we might be interested in, get in touch…

325 #11 features articles like : 3 texts about Flooding, Nuclear-Energy and Urban War- “Climate change, nuclear-energy and urban war in the new century”, “Road Ahead Closed” and “Electricity grid at risk as floods increase” by ‘Anti-civilisation cell of training & analysis, – N.T.’, “2 poems by Rodolfo Gonzalez Pacheco (1882-1949)”, “Industrial Alienation”- the social impact of industrialisation (from Terra Selvagia), “Anarchist comrades contributions to the IX Meeting for Animal Liberation in Italy, 2013”, “Memories from the Future: The Coming Technological Singularity”, about the visions of techno-futurist Ray Kurzweil, “Information… and Slavery”, “Necrotechnologies & Synthetic Biology”, “War to the machines! by Gianluca Iacovacci”, “Predictive Analytics: The Power to Predict Human Behaviour”, “The Daleks are Coming!” about the advent of semi-autonomous security bots, “Empty House and Crowded Forest & Some Thoughts on FAI/IRF by Eat”, “Escape into Sanity: The Fall by V.Q”, direct action chronology and much much more…

325 #10 features articles like : “One Year After… (August 2011)”- concerning the UK riots, “On talking less”- concerning the relationship between words and actions, “War against the information-age : a future of mass social control” about the state project to harness technology as a social pacification tool, “Perspectives about the energetic collapse of the techno-industrial society”, “Bio-economy, a way out of the crisis”- from Terra Selvaggia, “Class modifications”, “Excluded and Included”- what is the difference?, “Science in the aid of control : Robotics and aerial drones”- the rise of the drones and their military connotations, “Earthquake in Emilia Romagna : drones, surveillance and social control”, “Radioactive spills and nuclear crisis”, “On Sabotage and Terrorism”- concerning the spurious definition of ‘terrorism, “Fragment: Illegality”, FAI-FRI/CCF- “Lone wolves are not alone”, plus the ubiquitous direct action chronology and much much more…

325 #9 features articles like : “For Riotous Assemblies not Reasonable Dissent”, “Letter from Anarchist/Antifascist Prisoner Thomas Blak”, “The Struggle Against the Existent Continues”, “To address moral elitism within the anarchist milieu in response to the rioters of August 6th onwards…”, “Incitement to Burn”, “Beyond the ‘Movement’ – Anarchy!”, “Against the British ‘anti-capitalist movement’: Brief notes on their ongoing failure”, “‘Rain & Fire’ by a UK sector of FAI”, “A few notes on recent repressive attacks against anarchists in Italy”, “To believe, to obey and to work”, “‘Direct Action’ by Rodolfo Gonzalez Pacheco”, “About the case of Silvia, Costas & Billy”, “About Solidarity”, “About the “Conspiracy of Cells of Fire” case”, “P.Argyrou – Statement to the Court”, “Cells of Fire are Our Souls”, “Political Statement of P.Masouras”, “‘DO NOT SAY THAT WE ARE FEW’ by FAI”, “Mass sabotage in Berlin”, “Sketches of the last few years anti-militarist praxis in Germany”, “‘There is nothing to reform’ by Gabriel Pombo da Silva”, “Liebig 14 Evicted”, “Solidarity with Chilean Struggle”, “‘With the Rebels…’ by Rodolfo Gonzalez Pacheco”, “Tortuga Presente! Active Solidarity with Luciano!”, “News from the Social War in Sulawesi and Java – Indonesia”, and much much more…

Bored of the type of anarchism that seems to exist only as a boring routine of endless meetings and crap benefit gigs full of self-important tossers?

Sick of middleclass mummys boys pretending to be proles?
Fed up of being told what the ‘class struggle’ is and isn’t?

We are too and so we put together this booklet about it.

BEYOND THE ‘MOVEMENT’- ANARCHY!

From Dark Matter and 325 associates

Since the Bristol Riots” is a collection of communiques from the Informal Anarchist Federation (FAI), Earth Liberation Front (ELF), and other anonymous attacks in the Bristol area since the riots in April 2011 until October 2014.

Totaling 96 pages, included is a selection of over a dozen articles related to this time frame and context, such as reports of the Stokes Croft riots and recent police repression against the broader anarchist movement as they investigate the attacks. 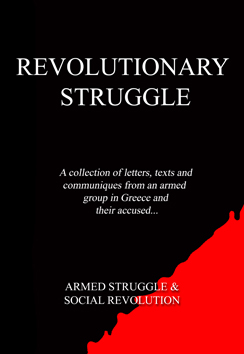 International Call for Solidarity with the Revolutionary Struggle (Greece)

Pola Roupa, Nikos Maziotis, Kostas Gournas are imprisoned anarchist comrades in Greece who have taken responsibility, as well as of slain comrade Lambros Foundas, of membership of the Revolutionary Organisation – Revolutionary Struggle. Their actions and their articulate anarchist analysis of capitalism and their high hopes for social revolution press a question to each reader who is ready to rebel and embrace their freedom.

International Call for Solidarity with the CCF : Imprisoned Members Cell + the accused of the same case! (Greece)

Our Day Will Come – Cover

Our Day Will Come

This book speaks about what was triggered after the arrest of the fugitive ex-member of 17N, Christos Xiros, the discovery of an escape plan to escape from Korydallos prison by Conspiracy of Cells of Fire – Imprisoned Members Cell; the subsequent manhunt against comrade Aggeliki Spyropoulou and her detention with relatives and friends of CCF comrades, and finally, the hunger strike for over 30 days in which they put their lives at risk. It also has a prologue by CCF – Imprisoned Members Cell. Edited by Sin Banderas Ni Fronteras.

“Individuality and the anarchist group” by CCF – Urban Guerrilla Cell

Fire & Gunpowder : From Indonesia to Chile – A Proposition for FAI

‘A Conversation Between Anarchists’ – A discussion about tactics, theory and practice between the imprisoned members of the Conspiracy of Cells of Fire and a few anarchists in Mexico

First release of Black International Editions: “Mapping the Fire” – International Words of Solidarity with the Conspiracy of Cells of Fire (CCF)

“This pamphlet is a meeting point of comrades from all over the world. An imaginary meeting since the walls and bars of the prisons where we are temporarily keep our bodies hostage. But our meanings remain free, escape from the cells of prison and are expressed with words continuing to provoke authority.

Words that still smell of fire and gunpowder, words which carry with them all of our hate for the system, words unrepentant and armed, words which transfer stresses and desires, words which break the isolation of prison, words full of passion for the mutiny we want to continue, words from Chile, Mexico, America, Spain, Germany, Switzerland, Italy, Bulgaria, Indonesia…” CCF

+ Flaming Atlas: Words of Solidarity with the CCF (Russian language)

Free international solidarity zine for the released comrades Eat & Billy. Featuring an introduction by the Conspiracy of Cells of Fire of the first phase and anarchist of praxis Theofilos Mavropoulos.

What Are Anarchists? by Alfredo M. Bonanno (ACN)

Some Notes on Insurrectionary Anarchism (ACN) 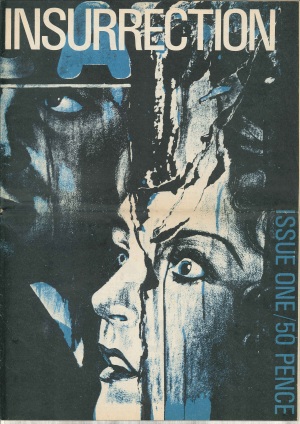 ‘Insurrection’ is an anarchist magazine of the 1980′s which was edited by Jean Weir of Elephant Editions, UK. Amongst agitational news reports of rebellion and repression, the publication carried some of the first English language translations of the work of Italian anarchist insurrectionist, Alfredo M. Bonanno, and remains an example of a high-quality revolutionary anarchist publication which has a confrontational analysis coupled with lasting insight.

Insurrection is the first publication to carry the key basic perspectives of anarchist insurrectional theory and methodology emerging at that time. Texts such as ‘Affinity Group’, ‘Why Insurrection’, ‘Beyond Workerism, Beyond Syndicalism’, ‘Informal Organisation’, ‘Beyond the Structure of Synthesis’, ‘Towards A New Projectuality’ and ‘Autonomous Base Nucleus’, all back to back with action reports informing and illuminating these theoretical ideas which have developed and spread around the world, becoming ‘dangerous’ tools in the hands of uncontrollables everywhere. Click the link to download and read the magazines in PDF format : ‘Insurrection’ PDFs online now (Elephant Editions Classics).

Anarchism and the National Liberation Struggle by Alfredo M. Bonanno

At Daggers Drawn; with the existent, its defenders and its false critics

From Riot to Insurrection : Analysis for an anarchist perspective against post-industrial capitalism by Alfredo M. Bonanno

From the Centre to the Periphery by Alfredo M. Bonanno

Locked Up by Alfredo M.Bonanno

The Insurrectional Project by Alfredo M.Bonanno

Toward the Creative Nothing – Renzo Novatore

Why A Vanguard? by Alfredo M. Bonanno

The Russian Revolution in the Ukraine by Nestor Makhno

The End of Anarchism? by Luigi Galleani 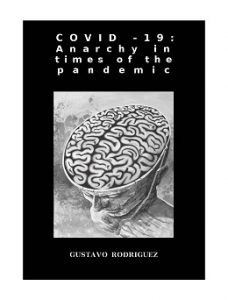 Covid-19: Anarchy In Times Of Pandemic by Gustavo Rodriguez 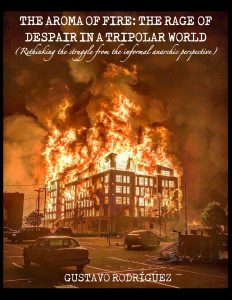 The Aroma of Fire: The Rage of Despair in a Tripolar World – Gustavo Rodríguez [I am Dynamite Editions]

“The sulphorous aroma of the combustion of petrol and is derivatives, causes an unmistakable olfactory sensation that incites a certain transitory state of euphoria and unconsciously sends us a succession of associated images that produce infinte pleasure: a burning precinct, a prison reduced to ashes, a conglomerate of charred atennas, a torched patrol car or a beautiful charred shopping centre. This becoming-fire -which lights up the night- causes a liberating commotion that no other means, no war machine, can bring about. A gesture is innovated that makes anarchy perceptible through the flames of devastation.” 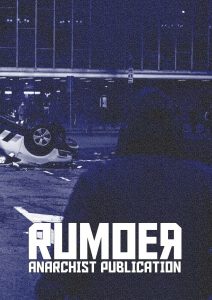 We want more uproar, which is why we give you RUMOER! A publication which will hopefully provoke discussion, irritation, inspiration, agitation, and attack. Because we do not want a raise in wages, but the destruction of work. Because we do not want to shout ‘boo!’ but want to hear BOOM! We want a confrontation without compromise with the system that is destroying our lives and the planet.

A Selection of Radical PDFs

‘Antagonistic violence: Approaches to the armed struggle in urban environments from an anarchist perspective’ by Gustavo Rodriguez

Until We Are All Free by Gabriel Pombo da Silva

The Story of a Bank Robbery – About Giannis Dimitrakis

FEIS: The Prison Within The Prison – About the Spanish Isolation Units

War on Kids – You do not have a Personality Disorder… (Flyer)

Reclaim Your Mind: An urgent message to the ‘insane’, the ‘angry’, the ‘unstable’, the ‘chaotic’, the ‘depressed’… (Dark Matter)

After Trikala : About the arrests of Alfredo & Christos

Individualists Tending toward the Wild (ITS) + Cover

While misery exists we choose rebellion: Freddy and Marcelo

Against Domestication by Jacques Cammatte

Essentialism and the Problem of Identity Politics

Prison Technologies – An appraisal of technologies of political control

Fire to the Powder Keg: war and social guerilla struggle in Iraq

Toward the Destruction of Schooling by Jan D. Matthews (Quiver)

Presos em Luta – About the Mutiny of Caixias Prison, Portugal

On Sabotage As One Of The Fine Arts (Venomous Butterfly)

From Politics to Life: Ridding Anarchy of the leftist milestone by Wolfi Landstreicher (Venomous Butterfly)

Fawda – On the Struggle in Palestine (Venomous Butterfly)

Caught in the Web of Deception: Anarchists and the Media (Venomous Butterfly)

Against the Engineering of Life (Venomous Butterfly)