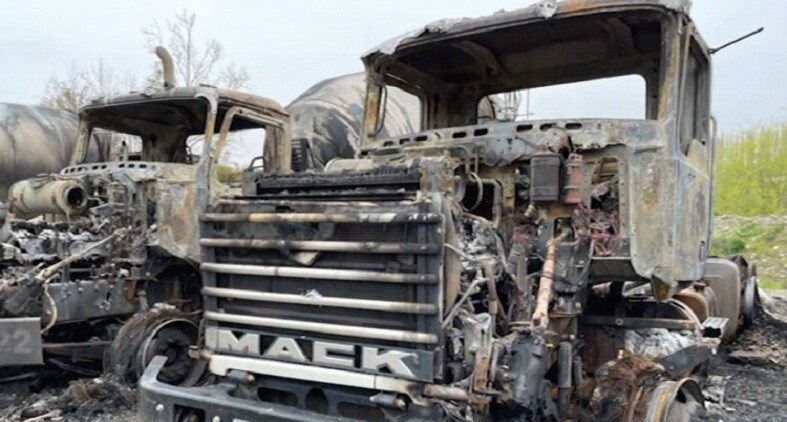 We claim the sabotage carried out in the night of September 18 against the companies Áridos Bullileo and Asfaltos Maule, which belong to the Vega-Ruiz family. This family has accumulated its wealth at the cost of the destruction of the ecosystem and the precariousness of our lives. We solemnly declare that there is no such thing as innocent wealth, that anyone in possession of capital has gone through a path of abuse and prevarication, which makes them a target. We know that this family has a long list of abuses against its workers and against the ecosystem of the region; its participation in the destruction of the Achibueno River and its ecosystem is well known. 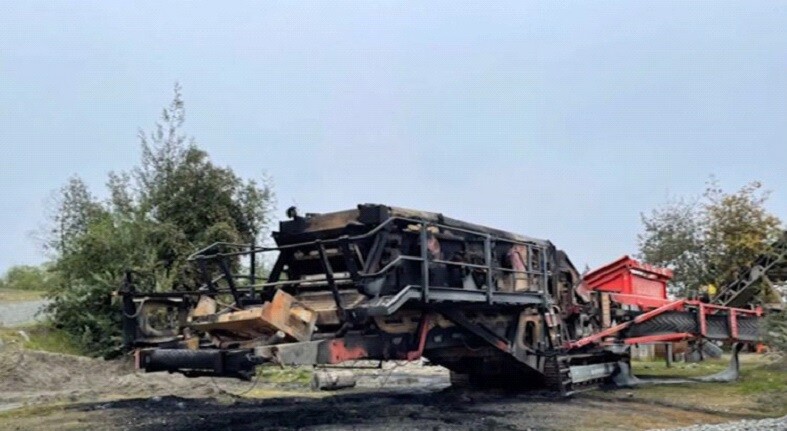 We denounce its complicity in the plundering of the environment, in all areas and in all corners of this territory called Chile.

The result of this action was the total destruction of :
3 truck mixers
2 hopper trucks
1 truck tractor
1 tractor
1 mobile sorting installation [the one in the picture above; NdAtt.]
1 backhoe

Before October 18, 2019, [date of the beginning of the great social revolt in Chile; NdAtt.] the workers of the companies mentioned mobilized to demand better wages and treatment from the owners. After a month of struggle, the Vega-Ruiz family resolved the conflict by buying off the head of the union, a traitor, which led to the demobilization of the workers, and then proceeded to unjustified mass dismissals. The anti-union practices of these people are constant and are part of the corruption maintained by the labor inspectorate and the large companies in the region.

The development of environmental exploitation in this region is not limited to the production of aggregates, which we have attacked, we can also see it in the company COEXCA, in the installation of the forestry company Arauco – responsible for the devastation of the forests in WALLMAPU – and in the destruction of the wetland of Ayuwün by the real estate company Alborada. This represents a real structured plan to destroy our territories, on the part of the entrepreneurs. The owners of the country, those who only see in our territory an opportunity to increase their wealth. It may have been different in the north-central zone (in Petorca, for example), but we cannot continue to passively contemplate the destruction of our environment, which is why, as a group, we see the vastness of the territory dominated by the Chilean state as a sacrificed zone; From north to south and from the sea to the Andes, wherever people live, a process of brutal extractivism is underway that gives priority to the profits of capital over the expense of people’s lives and the ecosystem; we are at a point of no return, where our only possible path as a people is to organize and struggle, to take action, to form combat groups and to carry out sabotage.

In this logic, the sabotage of the aggregate companies “Bullileo” and “Asfaltos Maule” responds to an initiative that we would like to see spread and multiply in all the corners where the State-capital threatens life. The fact that this action was replicated in the area of La Obra, in Linares, where there was sabotage against an extractivist agricultural company the day before the harvesting began, fills us with hope.

We are part of the militant youth who have seen how the old revolutionary structures have not been able to respond to this scenario: politics, obsolete, and its planning, the search for agreements and abandonment are mixed with a subversive discourse that gets nowhere; that is why we bet on the need to form REAL action groups, which go on the offensive in the fire of autonomy. Our determination must be directed towards sharpening the confrontation, in concrete terms, with those who believe they are the bosses of the country and who are dragging us, with their business, into a spiral of misery and precariousness: let the speculators of democracy know that we will not back down: our principles are not negotiable, our projects will not fall into the trap of the lesser evil.

Honor and glory for José Miguel Uribe Antipán, who fell in the October revolt. A warm embrace also to the Avaca Mancilla brothers, intractable prisoners of the war of the poor.
Freedom for the political prisoners of the revolt, the subversive prisoners and the Mapuche nation.