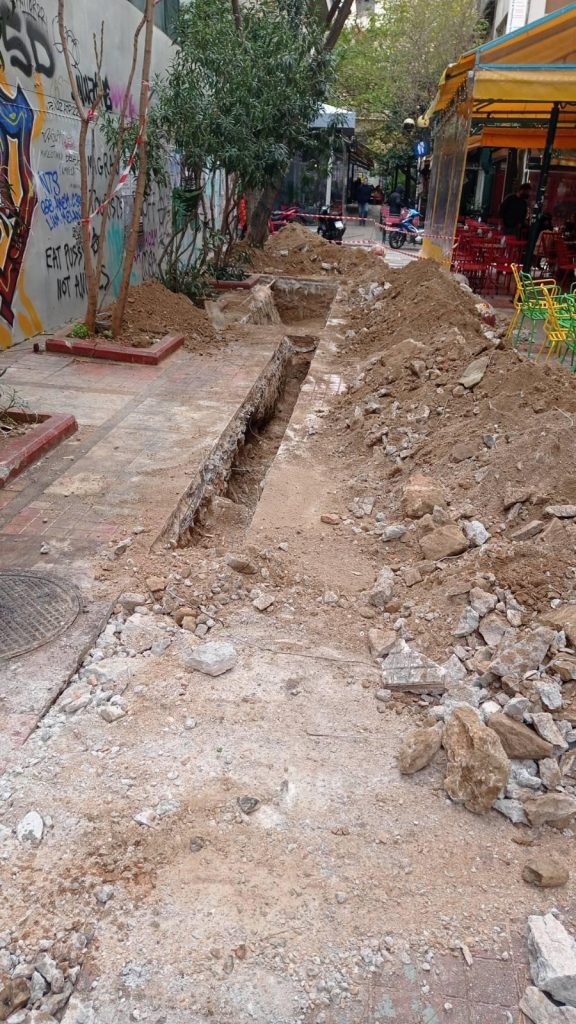 This morning a bulldozer was tearing up the pedestrian street of Messolonghiou for the electrification of a building of luxury apartments.

Some people from the neighborhood approached the workers and asked them the reason for the works. The contractor said it was ΔΕΗ (electric company) works to supply electricity to the building intended for luxury apartments. When asked for the contractor’s documents, he refused them as he also denied the connection of the works with the building, while at the same time they were going in and out of the building.

The individuals managed to stop the works and the contractor left, but Messolonghi remains a wreck. 15 minutes later 6 DRASI and DELTA motorcycles arrived at the site and searched for the people.

Exarcheia is a neighbourhood under threat of gentrification. Residents are being displaced, squats are being vacated, rents are going up. This building in Messolonghiou, intended for luxury housing for the rich and tourists, is another example of the march of capital. Every day we see the neighbourhood being changed and transformed into a playground for big investors. At the same time the square and the turnpike are under constant threat.

The pedestrian street of Messolonghiou is a symbol of rebellion and resistance*, a public space of communization and politicization that is still used daily by many people. The creation of this building will flatten the character of the street and the neighbourhood. At the same time, the copocracy is becoming more and more suffocating, with uniformed sheriffs bullying and arresting anyone they find in front of them. It is our collective responsibility to put a stop to the plans of the state and capital.

We call on the whole world to be vigilant…

NOT IN THE OUTSKIRTS, NOT ANYWHERE, OUT OF EVERY NEIGHBORHOOD

FIRST THE COPS, THEN THE CONTRACTORS, CORPORATIONS AND OTHER STUPIDITIES.

*Messolonghiou, the street where 15 year old Alexis Grigoropoulos was killed by cops, that led to the Greek Insurrection of December 2008. 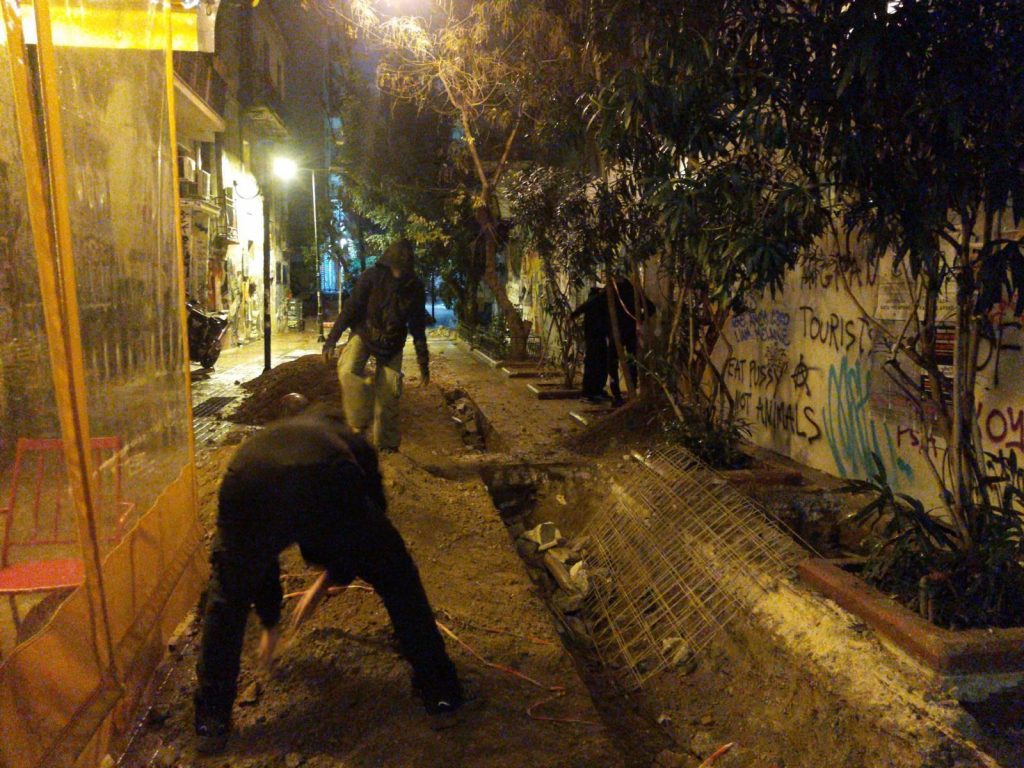 On Wednesday night 12/1 and after the destruction of the pedestrian street of Mesolonghiou in Exarcheia, people gathered and closed the holes and ditches left behind by the works for the power supply of a building for luxury apartments.

At the same time, a banner was raised against the gentrification of Exarcheia.

This move came as a direct response to the destruction of our spaces by contractors and companies trying to speed up the process of gentrification in the neighbourhood.

We stand as a mound against every bulldozer and every plan to gentrify the area, whether it is in Messolonghiou, the square or the Strefi. It is the responsibility of all of us to take care of our neighbourhoods and protect them from the attacks of the state and capital. 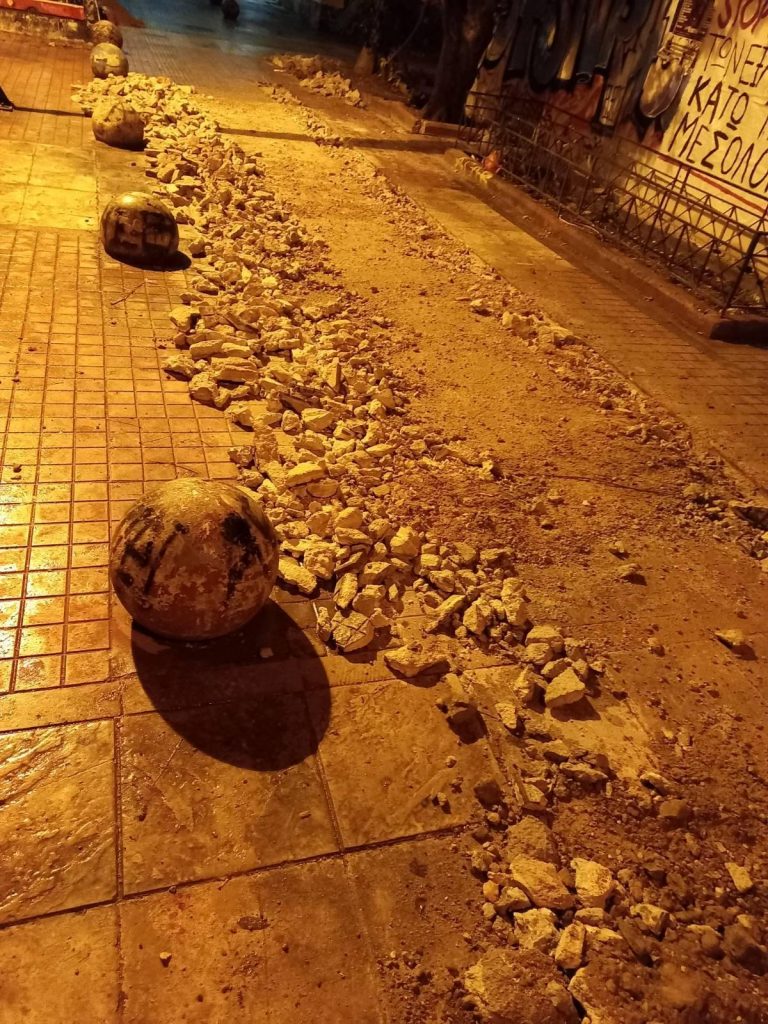 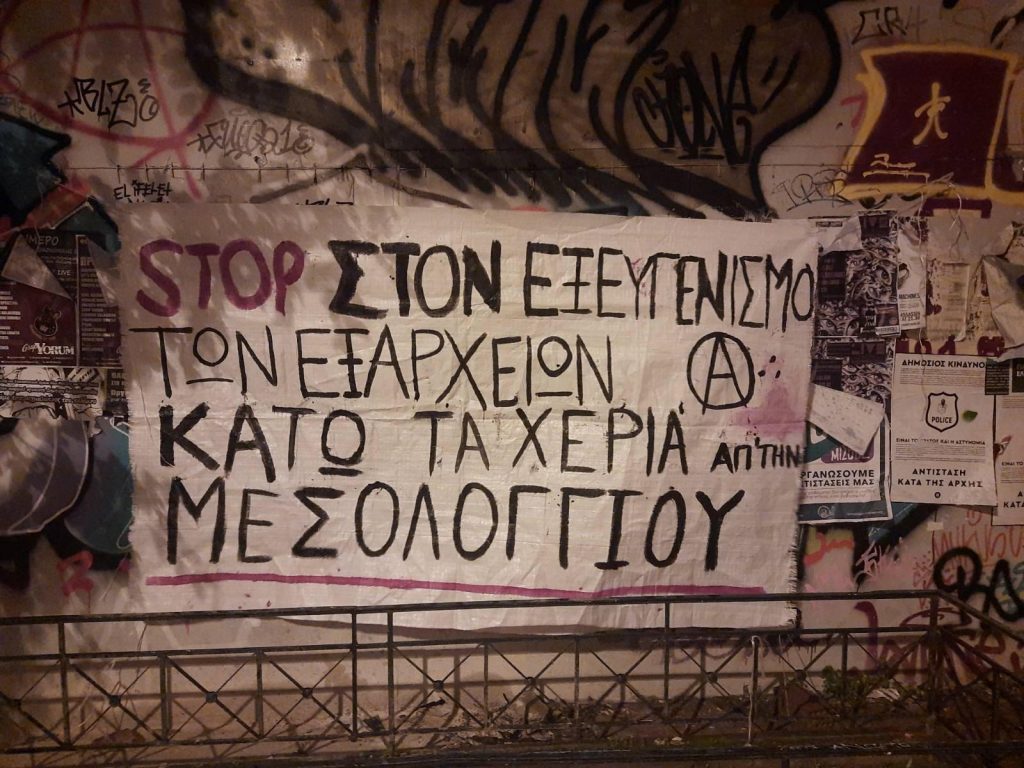