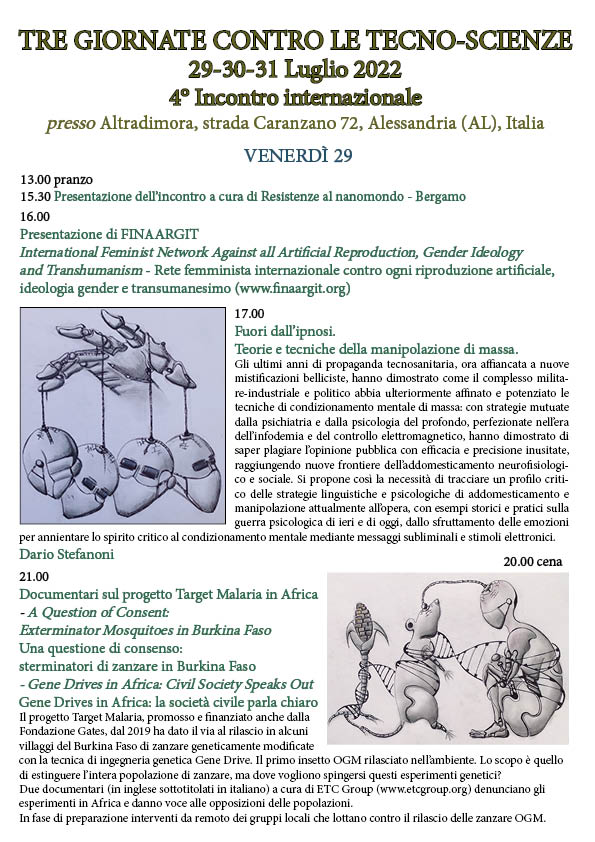 Documentaries on the Target Malaria project in Africa
– A Question of Consent: Exterminator Mosquitoes in Burkina Faso
– Gene Drives in Africa: Civil Society Speaks Out
The Target Malaria project, also promoted and financed by the Gates Foundation, has since 2019 started the release of mosquitoes genetically modified with the Gene Drive genetic engineering technique in some villages in Burkina Faso. The first GMO insect released into the environment. The aim is to extinguish the entire population of mosquitoes, but what do these genetic experiments want to go?
Two documentaries (in English with Italian subtitles) by ETC Group (www.etcgroup.org) denounce the experiments in Africa and give voice to the opposition of the populations.
Remote interventions by local groups fighting the release of GMO mosquitoes are being prepared.

9.00
The besiegeing of the human and the entire living.
The reign of quantity and the advance of the machine world.
Two opposing visions of the world, of the living, of nature, of the human being are colliding. In this battle, everything is at stake.
In Chile comes the first law banning discrimination against people with “mutations or alterations of their genome”: transgenic human beings. We have come to the point of no return. In this clash, dialogue, compromise, confusion, doubt, indecision are not possible. There are issues which it is not possible to discuss, just as it is not possible to discuss the possibility of genetically modifying a living being. A priori we are opposed to the techno sciences, to the world view that these bring and entail. We do not follow the criterion of profit, but we mark a clear ethical line, going beyond the materialist plane that focuses on data, on calculations, on forecasts, unable to grasp the broader plan of subjection and unable to grasp what, in the meantime, in being irremediably transformed and lost. Against the attack on all bodies, for the unavailability and inviolability of the living, against the attack on the dimension of the sacred and on the very sense of humanity, on the deepest spirit of what it means to remain human.
To fight and resist, in the union of free spirits.
Silvia Guerini – Resistenze al nanomondo

10.00
A developing evil: the malignant historical force behind the Great Reset.
The Great Reset of 2020 did not spring from nowhere but is the logical extension of the long-term historical phenomenon sometimes termed “development”. Hiding its malignant essence behind the facade of “doing good”, this is nothing other than a force of vitaphobic destruction. To counter its dark power, we need to access the light: the light of truth to expose its existence and the light of our own life-affirming spirituality and morality to resist and bring down its rule.
Paul Cudenec. https://network23.org/paulcudenec/, https://winteroak.org.uk/

15.30
To engineer the planet and all of life, or to dominate the energies and systems of life support and transform them into controllable machines.
Chinese engineers argue that the spread of the 5G network will not be able to cover the depths of seas and oceans. Instead, the 6G network promises to achieve underwater coverage.
Esther Dyson, daughter of Freeman Dyson, announced: “Soon (We will salt) the oceans, the land and the sky with an uncounted numbers of sensors invisible to the eyes, but visible to one another and to a variety of data device. The vast increasingly accurate data streams will combine and interact to produce more and more meaningful caches of knowledge.” (https://www.nogeoingegneria.com/campo-elettromagnetico/la-rete-6g-fornira-interazione-a-distanza-con-la-coscienza-umana/)
“Intelligent evil dust scattered everywhere like confetti” – were Julian Assange’s last words before his Internet connection was permanently cut off. (https://www.nogeoingegneria.com/tecnologie/sistemi-radar/pveri-intelligente-diabolica-sparsa-ovunque-come-confetti-le-ultime-parole-di-julian-assange/).
Over the next decade or two, we can expect to see – general purpose computers, sensors and wireless networks – all bundled up in millimeter-scale sensors floating in the air currents around us. (https://www.nogeoingegneria.com/tecnologie/sistemi-radar/smart-dust-in-artamento-i-sensori-che-tracciano-tutto-ovunque/).
We are in the midst of a transformation of frightening proportions. I will try to illustrate it with current data and future forecasts. It involves all dimensions of life on this earth. Everything is connected.
Maria Heibel. Curator of the website www.nogeoingegneria.com

9.00
From the Green Pass towards the Metaverse.
How to continue the Resistance?
Introduction by Resistenze al nanomondo (Bergamo)
with interventions by:
Popular Assembly Resisting Transhumanism – Bergamo, Popular Assembly Busto Arsizio, Contra toda nocividad – Madrid, www.contratodanocividad.espivblogs.net
We are witnessing the extension of a state of emergency built to never end. It is clear that in the emergency cybernetic platform of the Green Pass much more is going to take place, both in the world around us, and within our bodies that have become an experimental mRNA laboratory. Between the various phases of the genetic serum inoculation program, apparently partial and neutral pieces of the general path take shape such as Social Credit, 5G network, digital identity, synthetic meat, sterilization projects of animal species with the Gene Drive, climate issue, recombinant DNA and mRNA tecnhnologies as a new techno-sanitary paradigm, genetic modification of embryos. These pieces sctually represent cornerstones of the new cybernetic paradigm of war and engineering of the living that the transhumanist globalist élite seek to achieve in ever shorter times.
A round table with several voices and an invitation to groups and individuals to bring their experiences starting from a question that can no longer be postponed in the present times: will those who opposed the dominant narrative and the Green Pass be able to understand the new transformations where the raw material to exploit and transform is the human being and nature in its deepest essence?

How to get there
By car: From Genoa, take the motorway to Alessandria, exit at Ovada, proceed towards Acqui Terme and then take the Rivalta Bormida road. After the villages of Trisobbio and Rivalta Bormida at the crossroads for Cassine, continue for two kilometers and then you will find the indication for Caranzano. From Milan, exit at Alessandria Sud and follow the signs for Acqui and Cassine, after Cassine there is the junction for Caranzano. From Turin the same road.
By train: Train to Acqui Terme, we will pick you up at the station, please contact us by email to agree well in advance and not to arrive during discussion and lecture hours.

The cost to stay in the structure we rent is 10 euros per day, for the three days it is 30 euros per person, excluding meals.

FOR ALL THREE DAYS:
– FOOD WITHOUT ANIMAL EXPLOITATION AND WITHOUT POISON WITH DONATION TO COVER COSTS
– EXHIBITIONS AND DISTRIBUTIONS OF MATERIAL
INFORMATION: BRING BOOKS, PAPERS, TEXTS

The place where the meeting will take place is Altradimora, (www.monicalanfranco.it/altradimora/): a house with beds, bring, lightweight leeping bag and towels. There is also the possibility of putting up tents on the lawn in front of the house.
Help us organize the meeting in the best possible way, spreading this programme as much as possible.
It is necessary to notify in advance of your presence for limited number of beds and to organise of meals.

Exhibition of some works by the artist Cristiana Pivetti (www.cristianapivetti.org)

Presentation of the meeting: https://www.resistenzealnanomondo.org/italia-mondo/4266/ 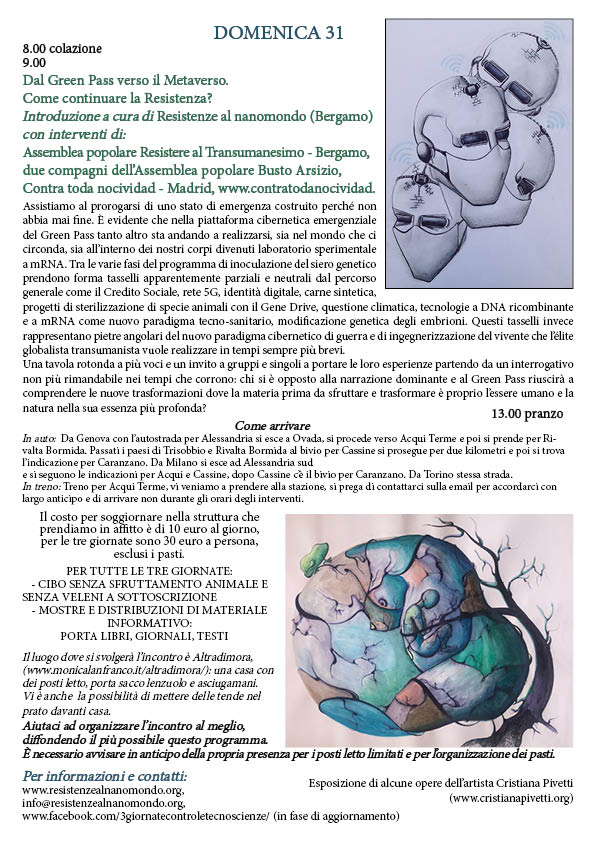