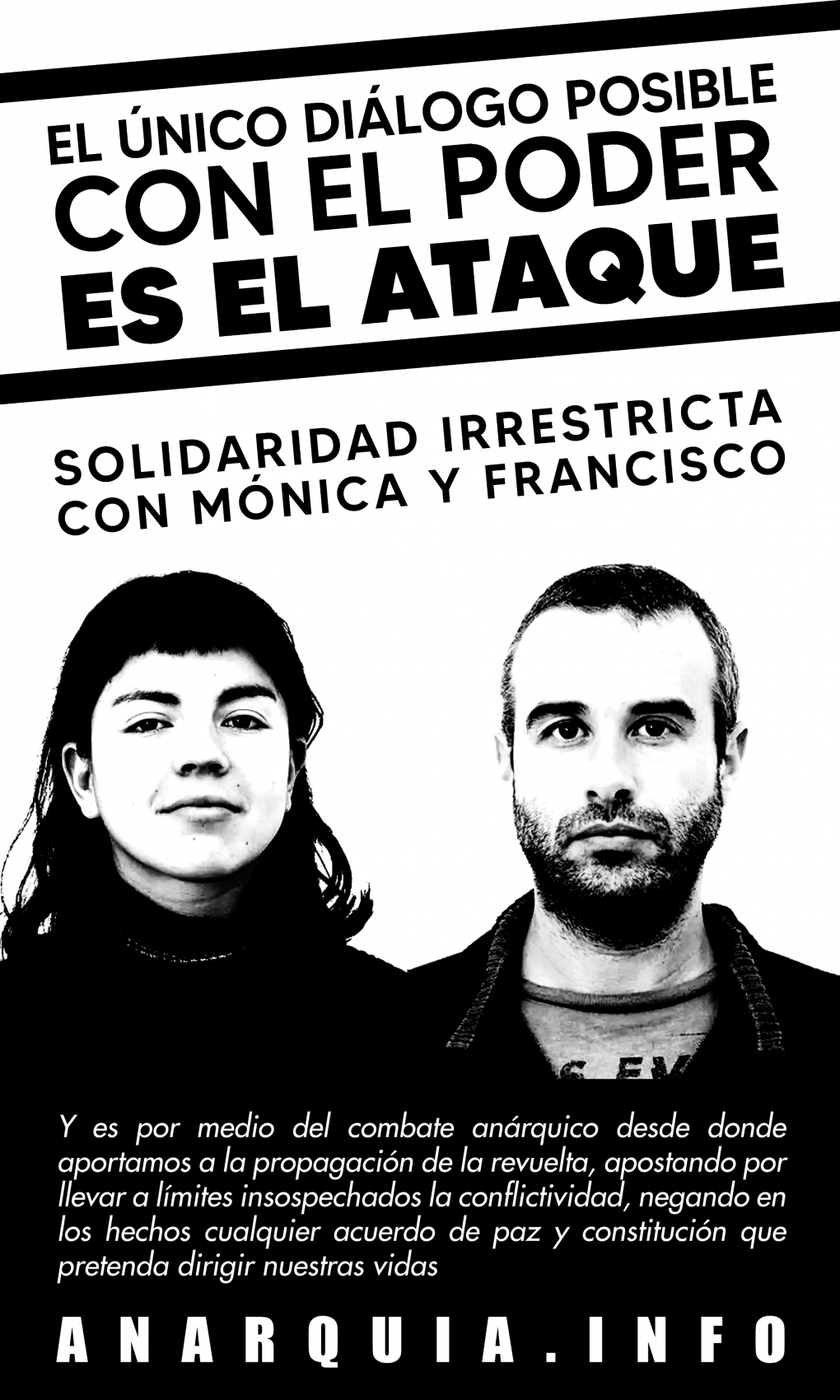 On July 24, 2020, comrades Monica and Francisco are arrested in two repressive operations. The authorities accuse Francisco of sending explosive packages against the former Minister of the Interior Rodrigo Hinzpeter and the 54th police station of Huechuraba (Action occurred on July 24, 2019, claimed by “Cómplices Sediciosos/Facción para la Venganza”), while both are accused of the double explosive attack against the Edificio Tánica in the commune of Vitacura (Action occurred in full revolt, on February 27, 2020, claimed by “Afinidades Armadas en Revuelta”).

During these more than two years of imprisonment, Monica has remained in the module of public connotation of the San Miguel prison while Francisco was initially imprisoned in the maximum security section of the CAS but then transferred, along with other comrades, in June 2021 to the La Gonzalina prison in Rancagua, where he is currently being held.

It is fundamental to emphasize that both of them in this time of confinement have been a permanent contribution to the anarchist and social war debates through their writings, communiqués and articles, realizing that prison is not the end of anything but another trench from where to give continuity to the insurrectional struggle and that its walls, bars and cages are not enough to break the solidarity and complicity among the anarchists. It is also from that place where we must situate that Francisco assumed the facts he is accused of, thus giving validity and validity to an anarchism of offensive action and the need for the continuity of his blows.

In prison both have formed together with other comrades a collective of anarchist and subversive prisoners, as another form of giving continuity to the struggle from the prisons. Reflection of this articulation of refractory wills was the hunger strike that they held for more than 50 days from March 22, 2021, where they demanded the annulment of the modifications of decree law 321 and the freedom of Marcelo Villarroel.

It was last August 10, more than two years after the beginning of his trial and after a series of extensions in the investigative period that his case was closed, after which the final indictment was handed down, where today the prosecution requests 30 years in prison against Monica, accusing her of two crimes of placing explosive devices. The prosecutors are requesting 129 years of imprisonment against Francisco, for two explosive devices, 3 frustrated homicides, injuries, damages, as well as two explosive devices.

The South Metropolitan Prosecutor’s Office, represented by Claudio Orellana, prosecutor specialized in bombs and cases against anti-authoritarians, will seek to bring more than 166 witnesses, 53 experts and more than 400 pieces of evidence. Seeking to settle accounts after the impossibility of obtaining convictions against comrades in 2010 in the Bombs Case. In the same sense, jumping its own legal hurdles, it seeks to qualify them as “recidivists” for the previous conviction in Spain.

For many, the crushing sentences that seek to bury the comrades can be truly paralyzing. Faced with an apparently unstoppable legal machinery, it would seem that only a sense of impotence and frustration could spread. But that is precisely where power seeks to take us. The united solidarity, on the other hand, knows how to make its way, full of vitality and creativity, betting on destroying the pretensions of the powerful to annihilate not only our comrades, but also the very idea of rebellion.

A recognized ex-minister who headed the repression; the police station from where Claudia Lopez’s murderers came out; the neighborhood of the rich armored during the revolt; or the mutilating police were the targets of those actions. Their motivations are ours and those of all of us who reject the world of authority and obedience. The actions for which the comrades will face trial are completely valid and legitimate against the powerful and repressors.

Those who have struck back and ended the impunity of the repressors have placed themselves in a clear and ancient revolutionary and particularly anarchic tradition that has sought by their own hand to destroy the State’s monopoly of violence and the tranquility of those who from their posts have commanded the most brutal repressive incursions. It is within this same historical line that we situate the case of our comrades Monica and Francisco.

The call is to multiply solidarity and agitation with the comrades. To raise from now on decentralized initiatives before the trial and to stop the desires of the persecutors who seek to lock up Monica and Francisco for decades.

Without any room for indifference: Solidarity and complicity with those who attack the powerful and repressors!

Monica and Francisco to the streets!