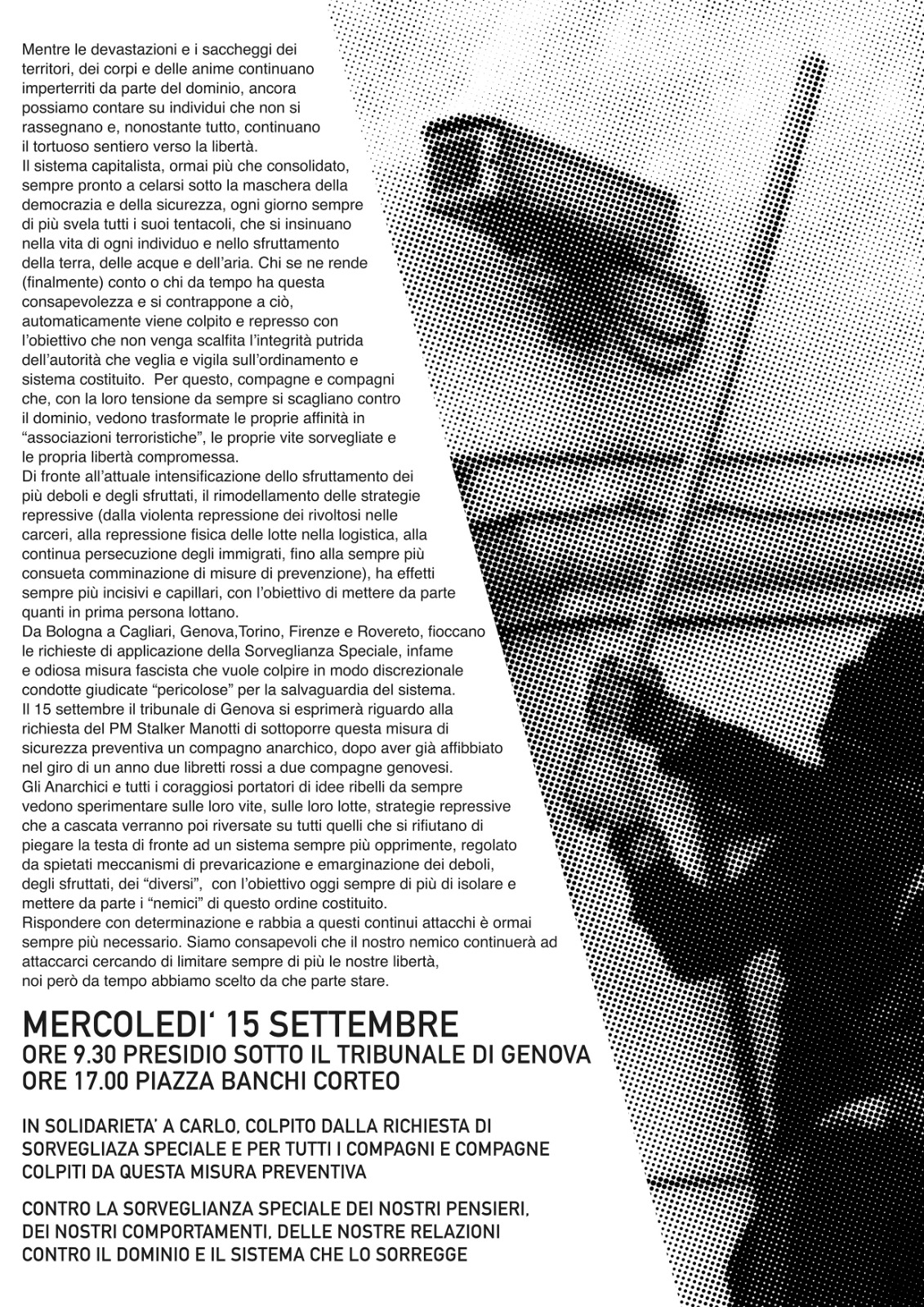 While power continues to ravage and plunder territories, bodies and souls, we can still count on individuals who do not resign themselves and who, in spite of everything, continue on the tortuous path of freedom.

The capitalist system, now well established, always ready to hide behind the mask of democracy and security, unveils its tentacles a little more each day, which are insinuating themselves into the life of each individual, as well as into the exploitation of the earth, water and air. Those who (finally) realize this and those who are aware of it and have been opposing it for a long time, are immediately beaten and repressed, so that the dirty integrity of the authority that watches over the order and the instituted system is not damaged. Because of this, companions who have always thrown themselves with their tension against the power, see their affinities described as “terrorist associations”, their lives monitored and their freedom limited.

Faced with the current intensification of the exploitation of the weakest and the exploited, the new shaping of the repressive strategies (from the violent repression of the revolts in the prisons to the repression by force of the struggles in the logistic sector, to the permanent persecution of the immigrants, up to the more and more common application of the preventive measures of surveillance) carries its effects, always more incisive and widespread, with the purpose of putting in a corner those who struggle.
From Bologna to Cagliari, Genoa, Turin, Florence and Rovereto, the requests for the application of the Special Surveillance fall as if it were raining. It is a dirty and detestable fascist measure, which aims to strike in a discretionary way behaviors considered “dangerous” for the maintenance of the system.

On September 15, the Genoa court will give its decision on the request of the Prosecutor Stalker Manotti to apply this measure of preventive surveillance to a fellow anarchist, after the same measure has already been applied to two Genoese companions during the last year.
Since always, Anarchists and all the courageous bearers of rebellious ideas see the power experimenting on their lives, on their struggles, repressive strategies that will be later used against all those who refuse to bow their heads in front of an ever more oppressive system, which follows the merciless dictates of the mechanisms of prevarication and marginalization of the weak, the exploited, the “different” people, with the aim of isolating and sidelining the “enemies” of this order, now more than ever.
It is now even more necessary to respond with determination and rage to these continuous attacks. We are aware that our enemy will continue to attack us, trying to limit our freedoms even more, but we have long since chosen our side.

Wednesday, September 15th,
9:30 am: gathering in front of the court of Genoa
5:00 pm: demonstration from Piazza Banchi

In solidarity with Carlo, hit by the request of Special Surveillance, and with all the companions affected by this preventive measure.

Against the special surveillance of our thoughts, our behaviors, our relationships, against the power and the system that supports it.