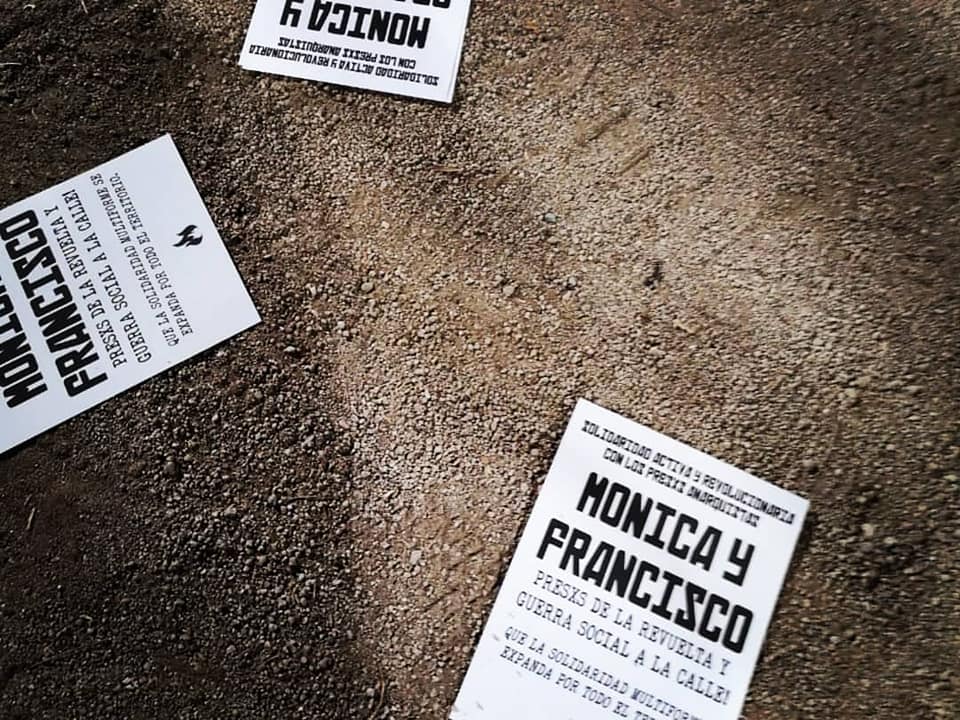 As I write this reflection on the day that marks one year since the Chilean State kidnapped Francisco and me, I hear the voices of comrades demonstrating outside the prison. On the other side of the bars, fences and walls, there are restless hands and hearts acting for those of us inside the cages of capital. On this occasion, not only did their shouts reach me, but I also received a pamphlet. The wind brought a beautiful and unexpected gift: beautiful anarchist propaganda!

For those of us who do or have done anti-authoritarian propaganda actions, many times we do not dimension the consequences that these can have on other people. In principle, the objective of any propaganda is to deliver a message, which ideally incites or inspires others to act against the current system of terror. But, perhaps, the receiver of this message will not act, will not be affected by the appeal and will remain a passive spectator. In that case, it is worth asking ourselves, perhaps the propaganda was not effective enough, what is it that leads an individual to confront what dominates him or her? Likewise, what drives someone to live passively in a world of misery and oppression?

I asked myself these kinds of questions on many occasions, sometimes I thought I had found answers but with time I understood that individual freedom, that is, the decisions and actions of others, cannot and should not be measured or foreseen. To speak of individual freedom in the first instance, there must be knowledge of reality and of the factors that create or limit it. In order to decide, it is necessary to know, and propaganda is fundamental in the latter.

In my case, what pushed me to take the path of permanent conflict was undoubtedly the propaganda of others (among other factors). My political knowledge would have been very different if I had not been the recipient of endless propaganda. I don’t know if it was a pamphlet, a street scratch, a communiqué, etc. or maybe it was the set of messages, slogans that led me to question and confront the hegemony of power and the society that sustains and needs it.

Today a simple piece of paper broke all the suggestive measures of this prison and flew to me. This propaganda in this place takes on an extra aspect; it showed me that no matter how much power has or pretends to have us prisoners who fight for a world where only mutual support and solidarity rule, we will never be alone.

We need a lot of propaganda, we need a lot of direct actions, if we want to hit capitalism and the relations it generates, as well as the imposed hegemony of power.

I take this opportunity to send a strong fraternal embrace to the Vergara Toledo family. Luisa Toledo was a propagandist who contributed greatly to the proliferation of many generations of young fighters.

Death to the state and long live anarchy!