Translated by act for freedom now!

I could but I don’t want to

I could convince myself that all nuclear power plants are reliable. But I don’t want to. I still keep Hiroshima, Nagasaki, Chernobyl, Fukushima in mind… As the earth becomes contaminated for ever, the usual characters in power tell us that there is nothing else to be done.

I could consider wars as something necessary to defeat enemies that seem invincible. But I don’t want to. All the deaths caused by conflicts between the States have only strengthened their domination on individuals through genocides, massacres and famines.

I could say that we all have the same possibilities. But I don’t want to. In this world of rape, sexual discrimination, imposed gender dualism, controls over the possession of the necessary documents, in whose streets the police murder you if you are undesirable, whose waters become mirrors of silenced death, the only possibility left to us is that of being all foreigners in the world, knowing we are acting in enemy territory.

I could turn on the other side when the earth is being devastated. But I don’t want to. When oil tankers sink in a sea already contaminated with radioactive waste, it becomes clear how the irreparable of existential misery is the choice of those who command and those who serve the world.

I could ponder on the fact that genetic engineering can make what we call existence better. But I don’t want to. Because it produces humans in line with a fixed model and it doesn’t seem to me that the latter corresponds with the magic of life.

I could suppose that medicine fit to tranquillizers and vaccines can erase some diseases. But I don’t want to. The straitjackets of medicalization have always been the response of order to stop and erase the chaos of passions.

I could fantasize that artificial food will put an end to famine in the world in the end. But I don’t want to. GMOs and similar rubbish have the only goal of increasing productions and privileges for the usual persons known and for the new cannibals. And those who invoke economic development are evoking more and more slavery for the majority of the individuals.

I could agree on the necessity of huge levels of energy and industrial infrastructures in order to live. But I don’t want to. All these cables, wires, magic boxes serve the Mega-machine of domination, not life worth being explored in all its possibilities, even those which appear to be impossible.

I could puzzle over the opinion that technology makes our life less painful. But I don’t want to. You can’t help considering the technological industry as a huge police industry. And normally police defend those who command for fear that those below can rebel and sabotage their existence as exploited.

I could stop minding the endless cameras that spy everyone’s life, located everywhere. But I don’t want to. I have no doubts between security and freedom. To the desert of the Tatars I prefer an adventure where stupor always accompanies me.

I could think that perhaps some form of State is neutral. But I don’t want to. The longing for freedom is stronger than any kind of totalitarianism, including the democratic one. Democracies have their gulags and concentration camps.

I could trust scientists, politicians, technicians, administrators, city planners, controllers, researchers, priests and professors. But I don’t want to. Where freedom becomes constraint, dictated by an authorization or a syringe in an arm, how can I have trust? How can I accept orders and decrees issued by those who created the damage affirming that catastrophe is a conspiracy-theory idea?

I could speculate on trust in the world. But I don’t want to. Even more so now, as for the umpteenth time I decided not to stand to attention — deciding that I decide over my body, they even took away from me the possibility to survive, suspending me from the prostitution modestly called work, as for those gentlemen you need the vaccine in order to prostitute yourself in the health-social sector. And it seems to me that this umpteenth obligation will be imposed as a cascade on all those who will have to do with feeding themselves.

I could convince myself that servitude is blackmail at the most and not an obliging choice. But I don’t want to. Do we intrude in others’ lives? But there exist inexpressible places where the desperation and pain caused by suffering the inability of one’s seditious perspective can be reverted into the determination of being oneself, without hesitation, placing the beauty of revolt on thought and action.

I could let myself be overwhelmed by a thousand compromises that affect my life. But I don’t want to. I hate infinitely because I continue to love unreservedly.

I could surrender and say: they won. But I don’t want to. I prefer the ethical imagination of my desires. The reality that exploits us is not to be sacrificed in the name of nothing. It issues a challenge to us, under the continuous threat of blackmail: the risk is not in winning over it or being defeated by it, but in the sacrilege of not letting anyone win. If certain cages have no bars, there are impassable walls that you can yet think of destroying by acting consequently: so as not to separate what we desire from what we want any more.
In the world of the virus it is freedom that should be contagious, not submission.

A DESERTER OF THE WORLD 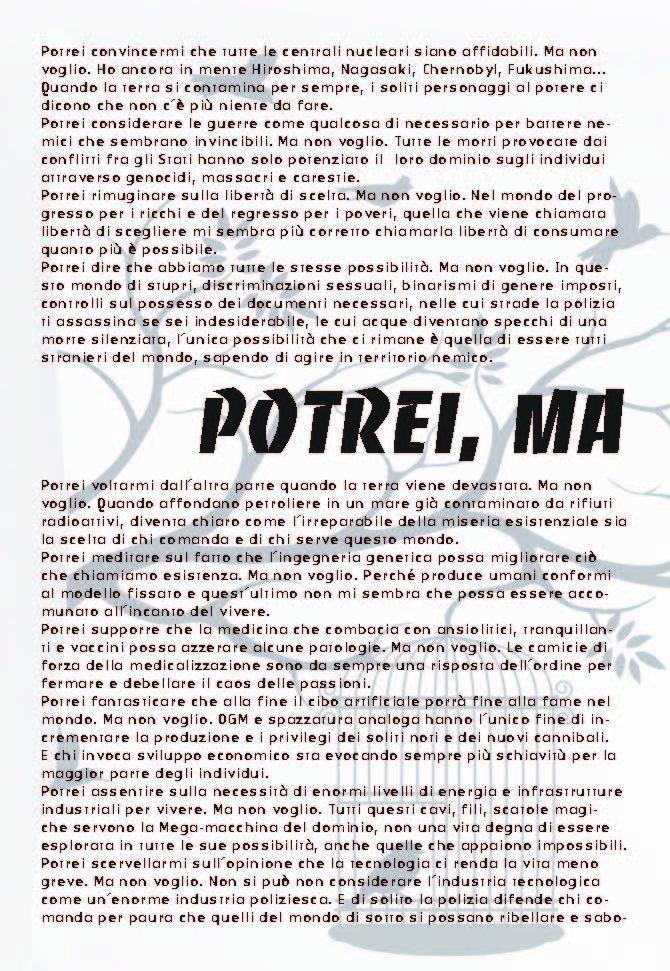