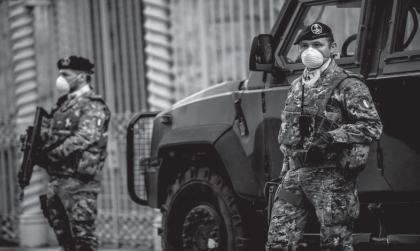 «When they kick at your front door
How you gonna come?
With your hands on your head
Or on the trigger of your gun…»

At the beginning of December one of the most beloved tele-virologists said that freedom of choice is a problem that those in power should solve. That those who insist on not obeying voluntarily should be forced to do so by force. That the freedom not to vaccinate, for example, can exist only for a hermit who lives alone in the middle of the desert. As for the others, citizens of society, “obviously there is no alternative for these people to the obligation, but to the obligation, the serious one, that is, the obligation that sends the carabinieri to your home to get you.” The peremptory statement made the service reporter who was hosting him chuckle (and certainly not because of his stunted Italian).

A week later, the army general entrusted by the government with the task of leading the war against the dreaded virus declared that he and his troops are ready: together with Santa Claus, he will “bring vaccinations house by house”. In addition to the elderly lost in the most remote villages, the military are “ready to vaccinate the whole audience” – the audience of children…

Faced with these close statements, and the world they announce, we wonder if feeling a chill run down my spine is a sign of weakness from conspiracists, the symptom of a delirium from flat earthers, or if, on the contrary, is the seraphic calm in front of the umpteenth aberration to express a kind of mock democraticism.

A question whose answer will not come from any app.