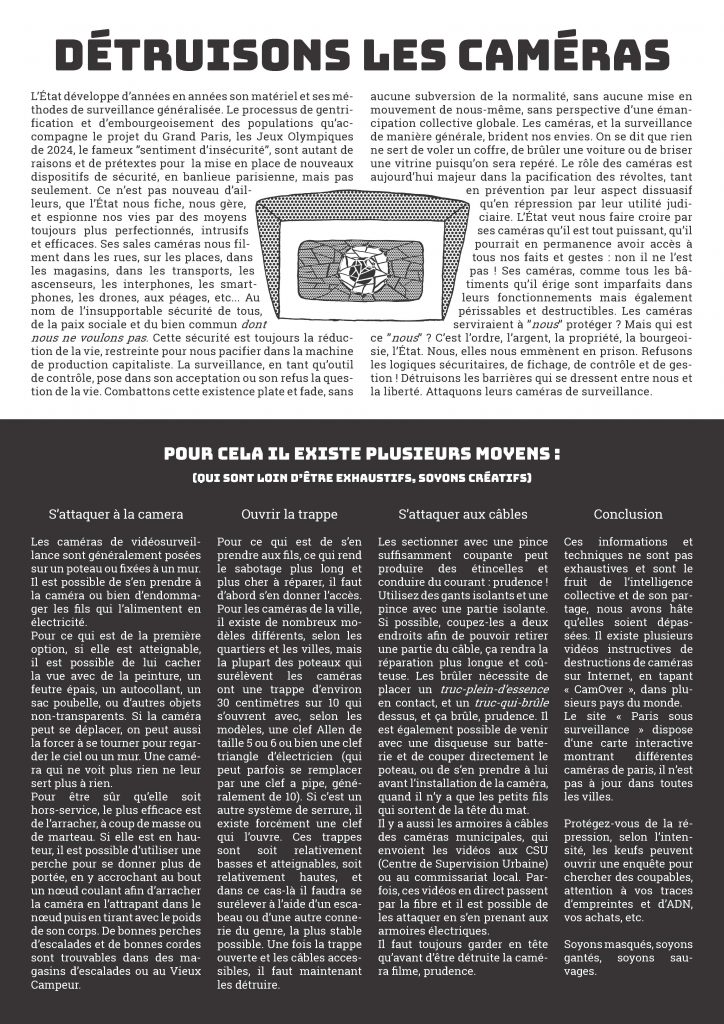 Year after year, the State develops its equipment and its methods of generalized surveillance. The process of gentrification and gentrification of the population that accompanies the Greater Paris project, the Olympic Games of 2024, the famous “feeling of insecurity”, are as many reasons and pretexts for the implementation of new security devices, in the Parisian suburbs, but not only. It is not new, moreover, that the State files us, manages us, and spies on our lives by means always more perfected, intrusive and effective. Its dirty cameras film us in the streets, in the squares, in the stores, in the transport, the elevators, the intercoms, the smartphones, the drones, at the tolls, etc…

In the name of the unbearable security of all, social peace and the common good that we do not want. This security is always the reduction of life, restricted to pacify us in the capitalist production machine. Surveillance, as a tool of control, poses in its acceptance or refusal the question of life. Let’s fight against this flat and bland existence, without any subversion of normality, without any setting in motion of ourselves, without perspective of a global collective emancipation. Cameras, and surveillance in general, restrain our desires. We tell ourselves that there is no point in stealing a safedeposit box, burning a car or breaking a window because we will be spotted. The role of cameras is today major in the pacification of revolts, as much in prevention by their dissuasive aspect as in repression by their judicial utility. The State wants to make us believe by its cameras that it is all-powerful, that it could permanently have access to all our actions: no it is not! Its cameras, like all the buildings it erects, are imperfect in their functioning but also perishable and destructible. The cameras would be used to “protect” us? But who is this “us”? It is order, money, property, the bourgeoisie, the State. They take us to prison. Let’s refuse the logic of security, of filing, of control and management! Let’s destroy the barriers that stand between us and freedom. Let’s attack their surveillance cameras.

For that there are several means:

(which are far from being exhaustive, let’s be creative)

The video surveillance cameras are usually placed on a post or fixed to a wall. It is possible to attack the camera or to damage the wires that supply it with electricity.
For the first option, if it is reachable, it is possible to hide the view with paint, a thick marker, a sticker, a garbage bag, or other non-transparent objects. If the camera can move, it can also be forced to turn to look at the sky or a wall. A camera that can’t see anything is of no use to them.
To make sure it is out of order, the most effective way is to rip it out with a sledgehammer or a hammer. If it is high up, you can use a pole to give yourself more reach, by attaching a noose to the end of the pole to pull the camera out by catching it in the noose and then pulling with your body weight. Good climbing poles and ropes can be found in climbing stores or at the Vieux Campeur.

As for going after the wires, which makes sabotage more time consuming and expensive to repair, you must first give yourself access. For city cameras, there are many different models, depending on the neighborhood and the city, but most of the poles that raise the cameras have a trap door of about 30 centimeters by 10 centimeters that can be opened with, depending on the model, an Allen key of size 5 or 6 or an electrician’s triangle key (which can sometimes be replaced by a pipe wrench, usually 10). If it’s another lock system, there’s bound to be a key that opens it. These hatches are either relatively low and reachable, or relatively high, in which case you will have to get up on a stepladder or some other such crap, as stable as possible. Once the trap door is open and the cables are accessible, you must now destroy them.

Cutting them with sufficiently sharp pliers can produce sparks and conduct current: be careful! Use insulating gloves and pliers with an insulating part. If possible, cut them in two places so that you can remove part of the cable, this will make the repair longer and more expensive. Burning them requires putting something full of gasoline in contact with them, and something that burns on them, and it burns, be careful. It’s also possible to come with a battery-powered grinder and cut the pole directly, or to go after it before the camera is installed, when there are only the little wires sticking out of the mast head.
There are also the cable cabinets of the municipal cameras, which send the videos to the CSU (Centre de Supervision Urbaine) or the local police station. Sometimes these live videos are sent over the fiber and it is possible to attack them by going after the electrical cabinets.
Always keep in mind that before being destroyed the camera is filming, so be careful.

These information and techniques are not exhaustive and are the result of collective intelligence and its sharing, we look forward to their passing. There are several instructive videos of camera destruction on the Internet, by typing “CamOver”, in several countries of the world.
The site “Paris sous surveillance” has an interactive map showing different cameras in Paris, it is not up to date in all cities.

Protect yourself from repression, depending on the intensity, the cops can open an investigation to look for culprits, be careful with your fingerprints and DNA, your purchases, etc.