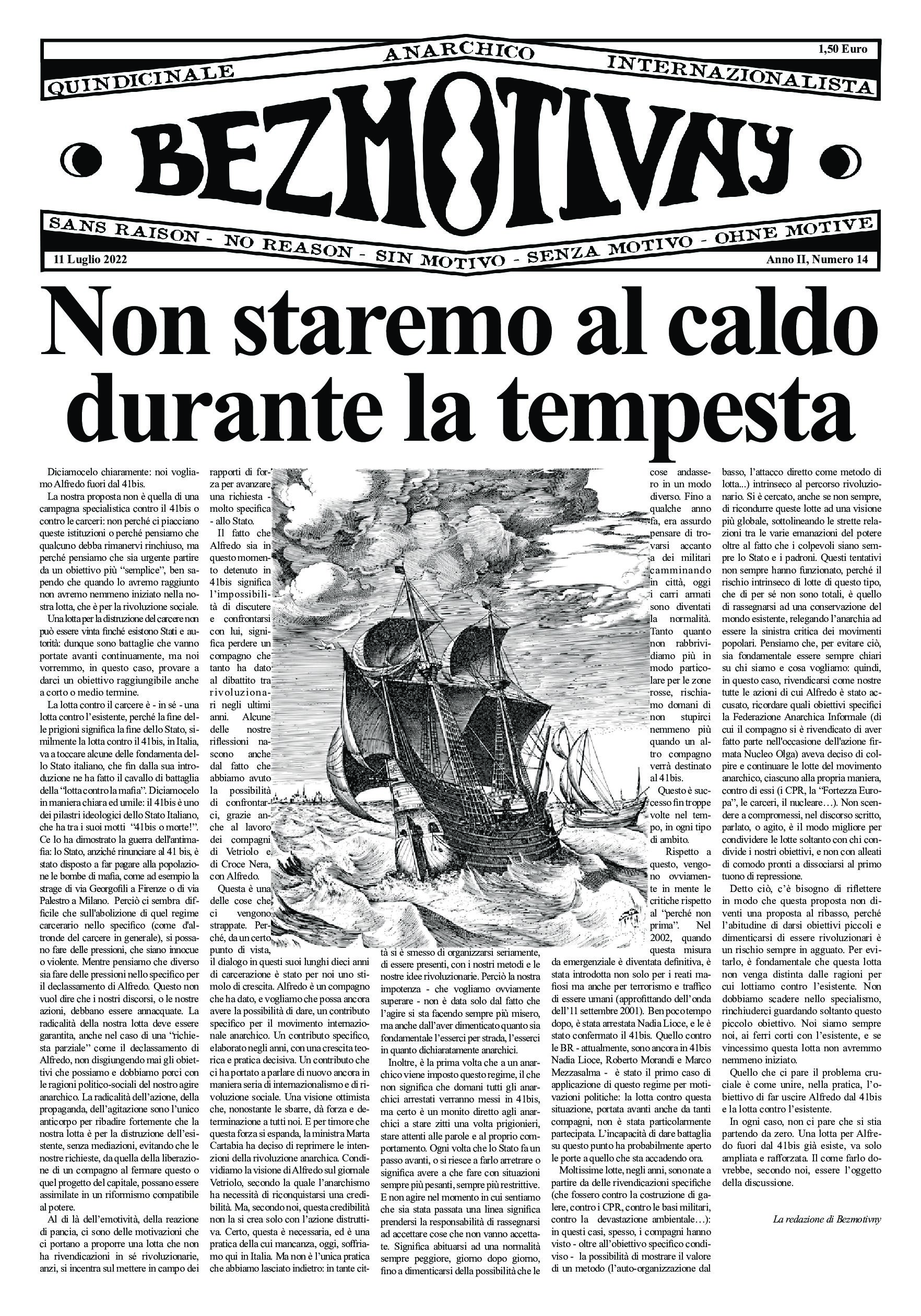 We receive and disseminate this text-proposal, which we will gladly return to in the near future:

Let’s be clear: we want Alfredo out of 41bis.

Our proposal is not that of a specialized campaign against 41bis or against prisons: not because we like these institutions or because we think anyone should remain locked up in them, but because we think it is urgent to start from a “simpler” goal, knowing full well that when we have achieved it we will not have even begun in our struggle, which is for social revolution.

A struggle for the destruction of the prison cannot be won as long as there are states and authorities: therefore, these are battles that must be carried on continuously, but we would like, in this case, to try to give ourselves an attainable goal even in the short or medium term.

The fight against prison is – in itself – a fight against the existing, because the end of prisons means the end of the state, similarly the fight against 41bis, in Italy, goes to touch some of the foundations of the Italian state, which since its introduction has made it the workhorse of the “fight against the mafia.” Let’s face it clearly and humbly: 41bis is one of the ideological pillars of the Italian state, which has among its mottos “41bis or death!” The anti-mafia war has shown us this: the state, instead of giving up 41bis, has been willing to make the population pay for mafia bombs, such as the massacre of Via Georgofili in Florence or Via Palestro in Milan. So we find it difficult that on the abolition of that prison regime specifically (as, moreover, of prison in general), we can make pressures, whether harmless or violent. Whereas we think it is different to lobby specifically for the downgrading of Alfredo. This is not to say that our speeches, or our actions, should be watered down. The radicality of our struggle must be ensured, even in the case of a “partial demand” such as Alfredo’s demotion, by never disjointing the goals we can and must set ourselves with the social-political reasons for our anarchist actions. The radicality of action, propaganda, and agitation are the only antibody to strongly reiterate that our struggle is for the destruction of the existent, without mediation, preventing our demands, from that of the liberation of a comrade to stopping this or that project of capital, from being assimilated into a power-compatible reformism.

Beyond the emotionalism, the gut reaction, there are motivations that lead us to propose a struggle that does not have revolutionary claims per se; rather, it is centered on bringing power relations into play in order to make a demand-very specific-to the state.

The fact that Alfredo is currently detained in 41bis means the impossibility of discussing and confronting him, it means losing a comrade who has given so much to the debate among revolutionaries in recent years. Some of our reflections also stem from the fact that we had the opportunity to confront, thanks also to the work of the Vetriolo and Black Cross comrades, with Alfredo.

This is one of the things that is torn from us. Because, from a certain point of view, the dialogue during these ten long years of his incarceration has been a stimulus for us to grow. Alfredo is a comrade who has made, and we want him to still be able to make, a specific contribution to the international anarchist movement. A specific contribution, elaborated over the years, with a decisive theoretical and practical growth. A contribution that has led us to talk again in a serious way about internationalism and social revolution. An optimistic vision that, despite the bars, gives strength and determination to all of us. And for fear that this strength will expand, Minister Marta Cartabia has decided to suppress the intentions of the anarchist revolution. We share Alfredo’s view in the Vetriolo newspaper that anarchism needs to regain credibility. But, in our opinion, this credibility is not created by destructive action alone. Of course, this is necessary, and it is a practice from the lack of which, today, we suffer here in Italy. But it is not the only practice we have left behind: in so many cities we have stopped organizing seriously, to be present, with our revolutionary methods and ideas. So our impotence-which we obviously want to overcome-is not only from the fact that action is becoming more and more miserable, but also from having forgotten how fundamental it is to be there in the streets, to be there as avowed anarchists.

Moreover, this is the first time that this regime has been imposed on an anarchist, which does not mean that tomorrow all arrested anarchists will be put in 41bis, but certainly it is a direct warning to anarchists to keep quiet once they are imprisoned, be careful with their words and their own behavior. Every time the state takes a step forward, either you can get it to back off or it means dealing with more and more burdensome, more and more restrictive situations. And not acting the moment we feel a line has been crossed means taking responsibility for resigning ourselves to accepting things that should not be accepted. It means getting used to a normalcy that is getting worse and worse, day after day, until we forget about the possibility of things going a different way. Until a few years ago, it was absurd to think of standing next to military personnel walking through town; today, tanks have become the norm. As much as we no longer cringe in a particular way over red zones, we risk tomorrow not even being surprised when another comrade is assigned to 41bis.

This has happened far too many times over time, in all kinds of spheres.

With respect to this, criticism with respect to “why not sooner” obviously comes to mind. In 2002, when this measure went from emergency to permanent, it was introduced not only for mafia crimes but also for terrorism and human trafficking (taking advantage of the wave of Sept. 11, 2001). A very short time later, Nadia Lioce was arrested, and her 41bis was confirmed. The one against the R.B.-currently, Nadia Lioce, Roberto Morandi and Marco Mezzasalma are still in 41bis-was the first case of the application of this regime for political reasons: the struggle against this situation, also carried out by many comrades, was not particularly participatory. The inability to give battle on this point probably opened the door to what is happening now.

Many struggles, over the years, have arisen from specific demands (whether they were against the construction of jails, against CPRs, against military bases, against environmental devastation…): in these cases, comrades often saw-in addition to the specific shared goal-the possibility of showing the value of a method (self-organization from below, direct attack as a method of struggle…) intrinsic to the revolutionary path. Attempts have been made, though not always, to bring these struggles back to a more global view, emphasizing the close relations between the various emanations of power as well as the fact that the culprits are always the state and the bosses. These attempts have not always worked, because the inherent risk of struggles of this kind, which in themselves are not total, is that of resigning oneself to a preservation of the existing world, relegating anarchy to being the critical left of popular movements. We think that, in order to avoid this, it is essential to always be clear about who we are and what we want: thus, in this case, to claim as our own all the actions of which Alfredo was accused, to remember what specific targets the Informal Anarchist Federation (of which the comrade claimed to have been a member on the occasion of the action signed Nucleo Olga) had decided to strike and to continue the struggles of the anarchist movement, each in its own way, against them (the CPRs, “Fortress Europe,” prisons, nuclear power…). Not compromising, in written, spoken, or acted discourse, is the best way to share struggles only with those who share our goals, and not with allies of convenience ready to disassociate at the first thunder of repression.

That said, there is a need to reflect so that this proposal does not become a downward proposal, because the habit of giving ourselves small goals and forgetting to be revolutionaries is a risk always lurking. To avoid this, it is essential that this struggle not be separated from the reasons why we struggle against the existent. We must not lapse into specialism, locking ourselves up looking only at this small goal. We are still us, at loggerheads with the existent, and if we won this struggle we would not have even started.

What seems to us the crucial problem is how to unite, in practice, the goal of getting Alfredo out of 41bis and the struggle against the existent.

In any case, it does not seem to us that we are starting from scratch. A struggle for Alfredo out of 41bis already exists; it just needs to be expanded and strengthened. How to do this should, in our opinion, be the subject of discussion.