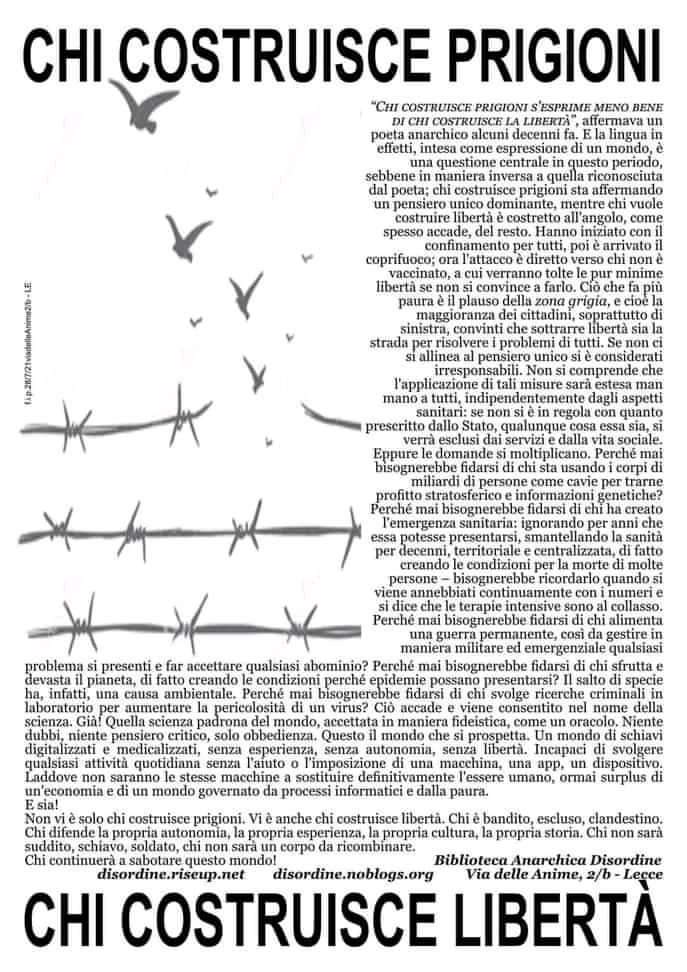 “He who builds prisons expresses himself less well than he who builds freedom,” said an anarchist poet a few decades ago. And language in fact, understood as the expression of a world, is a central issue in this period, although in a reverse way to that recognized by the poet; those who build prisons are establishing a single dominant thought, while those who want to build freedom are forced into the corner, as often happens, after all. They started with confinement for everyone, then came the curfew; now the attack is directed towards those who are not vaccinated, who will be deprived of even the smallest freedoms if they are not convinced to do so. What is more frightening is the applause of the gray zone, that is the majority of citizens, especially of the left, convinced that taking away freedom is the way to solve the problems of all. If you do not align yourself with the single thought, you are considered irresponsible. It is not understood that the application of these measures will be extended gradually to all, regardless of health aspects: if you are not in compliance with what is prescribed by the State, whatever it is, you will be excluded from services and social life.

Yet the questions multiply. Why should we trust those who are using the bodies of billions of people as guinea pigs to make stratospheric profits and genetic information? Why should we trust those who created the health emergency: ignoring for years that it could occur, dismantling health care for decades, both territorial and centralized, in fact creating the conditions for the death of many people – we should remember this when we are continually clouded with numbers and we say that intensive care units are collapsing. Why should we trust those who feed a permanent war, in order to manage in a military and emergency way any problem that arises and to accept any abomination? Why should we trust those who exploit and devastate the planet, creating the conditions for epidemics to occur? The species jump has, in fact, an environmental cause. Why should we trust those who carry out criminal research in the laboratory to increase the danger of a virus? This happens and is allowed in the name of science. That science is the master of the world, accepted in a fideistic way, like an oracle. No doubts, no critical thinking, only obedience. This is the world that lies ahead. A world of digitized and medicalized slaves, without experience, without autonomy, without freedom. Unable to carry out any daily activity without the help or the imposition of a machine, an app, a device. Where it will not be the same machines to permanently replace the human being, now surplus of an economy and a world governed by computer processes and fear.

Who will continue to sabotage this world!