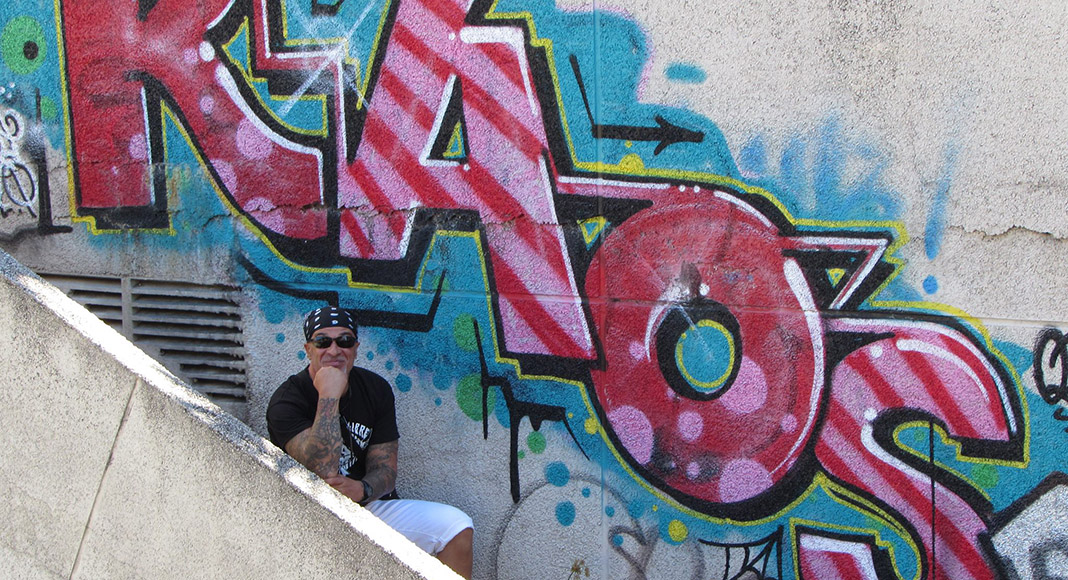 “Never having approached drugs, being very clear about his ideas, and his physical and mental strength have helped him to survive in prison, despite the FIES. Almost all of his comrades have died. He survived a genocide” explains in Oviedo the companion of the anarchist prisoner.

Elisa di Bernardo went to Oviedo yesterday to tell the situation of her colleague Gabriel Pombo da Silva. Invited by the group Higinio Carrocera, in collaboration with the local Cambalache, taking advantage of her visit to Pombo to the prison of Mansilla de las Mulas in León, Elisa gave a very complete account of both the legal situation of the anarchist prisoner and his life and struggle in his more than 30 years in the prisons of the State. It was a talk that not only served to have information about Pombo but also to show how, inside the prison walls, “democracy” disappears and one enters a dark world, subjected to physical and psychological torture, to personal revenge by judges and jailers, to prisons inside the prison (FIES). In addition, Elisa gave us perspective and context on how inequality, misery, injustice and poverty consubstantial to the capitalist and statist system manufactures criminals.

Elisa began the talk by taking out of her backpack three important books to know the situation of prisoners and the world of the anti-prison struggle: “Extrema Indigencia, extrema violencia”, “Para que no me olvides” by Madres Unidas contra la Droga and the Informe sobre la Tortura en el Estado español that Elisa explained was censored by the police, as it tells the saddest time of the FIES regime (files of inmates of special monitoring).

After this bibliographical introduction Elisa di Bernardo spoke about Gabriel Pombo’s life trajectory. “They lived in Vigo in a shack until they emigrated to Germany to earn a living. There he discovers a new world and also begins to know the instinctive solidarity among the poor. The first political question Gabriel asked himself was: “If my father builds houses, why don’t we have a house?

Gabriel grew up practically in Germany and was arrested for the first time in Germany, at the age of 13, for a fight. He is taken to the juvenile prison. On parole he escapes and decides to return to Spain. His return is an adventure. In 1981 were the drug years. “He knew where the drugs came from and who had introduced them and, above all, what for,” explains Elisa. That was the moment when he decided to expropriate. She started with food trucks, to distribute the merchandise among poor families and, when she was 15 years old, she started expropriating banks with the aim of supporting prisoners and their families with the loot. He also contributed to the Copel prisoner support organization, although he was not in it.

When he was 17 years old in 1984, he was sentenced to 3 years in prison for one of the robberies, precisely the one he had not committed. “He was very angry and from then on he went to the banks with his face uncovered and leaving his fingerprints”. The three years turned into five years and in 1989, due to a mistake, he was released and went on the run”. During those months he continued robbing banks and attacking pimps and drug gangsters. Another of his objectives was to free prisoners and facilitate the escape of people like Xosé Tarrío, although he did not succeed. “In those 4 months he sought ruin, since he executed a pimp and mafia owner of a brothel. He had previously warned him”.

In 1990 he was already sentenced to 166 years, for a penal code that imposes a maximum of 30 years. “But he has been in a brutal regime of FIES (created by a PSOE government), from prison to prison. They were 10 brutal years in which the most terrifying prison was Teruel. How much they knew that they would be tortured that those who would later be prisoners, in their homes used electricity to exercise their bodies for what they were going to do to them once they were in prison”.

Elisa continues with the story of prison life. She talks about the emergence of the modular prison, since the 90’s, with the aim of avoiding riots, “it consisted in avoiding leaving the prisoners together for a long time, although it did not prevent the fight from continuing. That is why the APREs were created, prisoners in special regime, where there is permanent isolation. Despite this, jailers and judges consider Gabriel Pombo to be the “leader” of revolts “although it was impossible because he was always in solitary confinement. It was an excuse to avoid his ordinary sentences. In total he spent 23 years in solitary confinement”, explains Elisa, who adds that now the State has changed its strategy and instead of applying torture “they simply take away the rights you have so that you behave well”.

“Today,” explains Elisa, “of the one hundred FIES prisoners of the 1990s, only six are still alive. Gabriel survived a planned genocide, although he escaped, among other things, by staying away from drugs. His approach to anarchism occurred in the 90s. In 2001 he entered Basque prisons, where there is a different prisoner policy. In 2003 he was sentenced to remission and began to receive furloughs, and in one of the furloughs he managed to escape. Previously, a judge in the Basque Country had offered him the job of educator of minors, which he radically rejected as he understood that it meant serving the penitentiary institution by “going over to the other side”. He travels to Aachen (Germany) and writes his book ‘Diario e ideario de un delincuente’ (Diary and ideology of a delinquent) during those months.

In Germany he was sentenced to 14 years, but was returned to Spain after serving 8.5 years in Germany. Of his stay in German prisons”, Elisa says that Gabriel highlights that they are much more ‘democratic’ in the sense that it is a prison model where the law is simply applied and everything is more correct, compared to the arbitrariness of Spanish prisons “and the continuous revenge of jailers and judges”.

In January 2013 she returns to Spain and her support and legal group starts working on the basis of the pillars of European law, the principle of specialty, which Elisa explains. This is that an EU country can only return a prisoner to another country that demands it if he is going to serve the outstanding sentence and not another. What he had left to serve was 3 years and seven months.

In May 2016, Gabriel Pombo’s release is approaching. From Germany comes the order to release him. It is then when the court of Gerona makes a strange recasting of sentences and Judge Mercedes Alcázar decides that then he still has to serve 16 years for the gross calculation. Gabriel’s lawyer filed a lawsuit for prevarication against the judge, who was suspended for 6 months. Gabriel is released after 30 years.

He begins to reorganize his life, settles in a family house that he intends to fix to create a libertarian athenaeum to which he will give the name of Agustín Rueda, has a daughter. However, the tranquility was short-lived. A German lawyer had not properly processed the specialty principle. After a year and a half, Gabriel, Elisa and their daughter leave Spain to avoid a new arrest, abandoning their life plans. It is a relative “clandestinity” “with a little girl you can’t do much. We were in Portugal, in a family clandestinity, and our only weapons were just diapers”, jokes Elisa. things get complicated and the request from Spain is joined by another one from Italy and there is an international arrest warrant. They ask for Portuguese nationality (Gabriel’s mother is Portuguese) to avoid the transfer, but they cannot avoid it, since there is no jurisprudence in Portugal on the principle of specialty, “the strongest country wins”, explains Elisa. At the same time, the judge of Gerona, now rehabilitated, “prepares her revenge” and sends faxes to the Portuguese judges saying that Gabriel is dangerous, to put pressure on them. Thus, in May 2020 he is delivered in Badajoz, whose prison has a very bad reputation. “It was a shock for Gabriel, also in this center, it was reported that the files had been burned by chance where there would be material for Human Rights organizations to know and document the tortures that were applied “but it is the chronic impunity of Spanish prisons,” explains Elisa.

He remained in Badajoz for 5 months, at a time when the so-called respect module was created, which implies total submission, “it is a tool of control,” says Elisa.

For the first time he became a second-degree prisoner, although the pandemic arrived and the visiting regime was suspended. He was transferred to the prison of Mansilla de la Mulas, built in 1999, “a prison that pretends to be more prograde. So it is half empty. Gabriel refuses to enter the respect module and they take him to what is called an observation module, where they leave him quite alone,” she says.

Elisa also explains that there is now a new generation of prisoners and that their “ethics” have changed for the worse. There are no more struggles, no more organized prisoners, no more solidarity. The system has won again in the years of application of isolation policies…

At present, Elisa di Bernardo explains the legal defense strategy they are carrying out, which is based on three fronts. The first is to continue working on the right of specialty, which is being processed in the EU Court of Justice in Luxembourg. Another front is the demand that the sentences be recast on the basis of the new penal code, (which reduces the maximum sentences to 20 years). The third front is that the penitentiary computation recognizes all the sentences due to him. With all this, Gabriel Pombo should already be on the street. However, adds Elisa, “today the judiciary uses time to its advantage to punish. It delays sine die the times and thus avoids applying the law”.

“We believe and hope that it will come out soon, although the sentence of the Italian court is still a mystery, you never know where it may come from”, says Elisa who, however, understands that “we have won some of the battle. The Provincial Court of León has forced the prison to eliminate the interventions in his communications, arguing that he is not a dangerous prisoner and that it has no justification and the order has been very hard against the penitentiary institution. That is why also in his current prison now begins to have problems. “Another revenge, this time, they have begun to deny him permissions,” concludes Elisa.