Our small cell of anarchists decided to attack as our declaration of solidarity with Alfredo Cospito and the other hungerstrikers around the world. On the 11th January we damaged two buildings of the state in Leipzig. One is the citizens administration and the other is “Support”-center for criminal youth. Both represent institutions the state uses to control us. We consider the state our enemy that stands between us and our liberation, so we have to attack it relentlessy.

On our minds this night was the way the italian state tortures Alfredo Cospito. We see the fight in the prisons around the world and wanted to support the hunger strikers, too. Your writing and your actions as part of the Black International were always very similar with how we like anarchy for our self. Anarchy as the attack of every authority without compromise. We will keep doing that as long as we are free!

The 11th January was also the day that the subversive part of the activists in Luetzerath called for an action day. On our way back from the action we saw a car of one of the biggest housing-corporations in Leipzig – “Kühne Immobilien”. In solidarity with the brave defenders of Luetzerath we destroyed their car, too. The climate movement could learn a lot from Cospitos actions. What a dream it would be to hear of the detonation of a bomb in front of the police station in Aachen or the kneeshot for the CEO of “RWE”. Maybe we will get there in Germany at some point.

One night later in leipzig anarchists burned 6 cars from Hertz in solidarity with Cospito! That is music in our ears! https://knack.news/4783

Power to all prisoners! Free them all!

On October 29, 2018, two anarchist comrades from Madrid, we were arrested accused of a sabotage with fire to a Bankia ATM on April 13 of the same year. The action was framed in solidarity with Lisa, who was sentenced to 7 years for a bank robbery in Aachen (Germany), right now in third degree.

There has been a deal between the sides: 1 year suspended sentence for each partner and 7000 euros civil liability paid before the trial.

We were facing 3 years in prison and 17,000 euros of civil liability. Having assessed all the options, we made this decision taking into account all the surrounding factors. The deal is to assume the guilt.

Thank you very much for the solidarity expressed in a thousand and one ways to all comrades around the world.

Fight against all authority now and always! 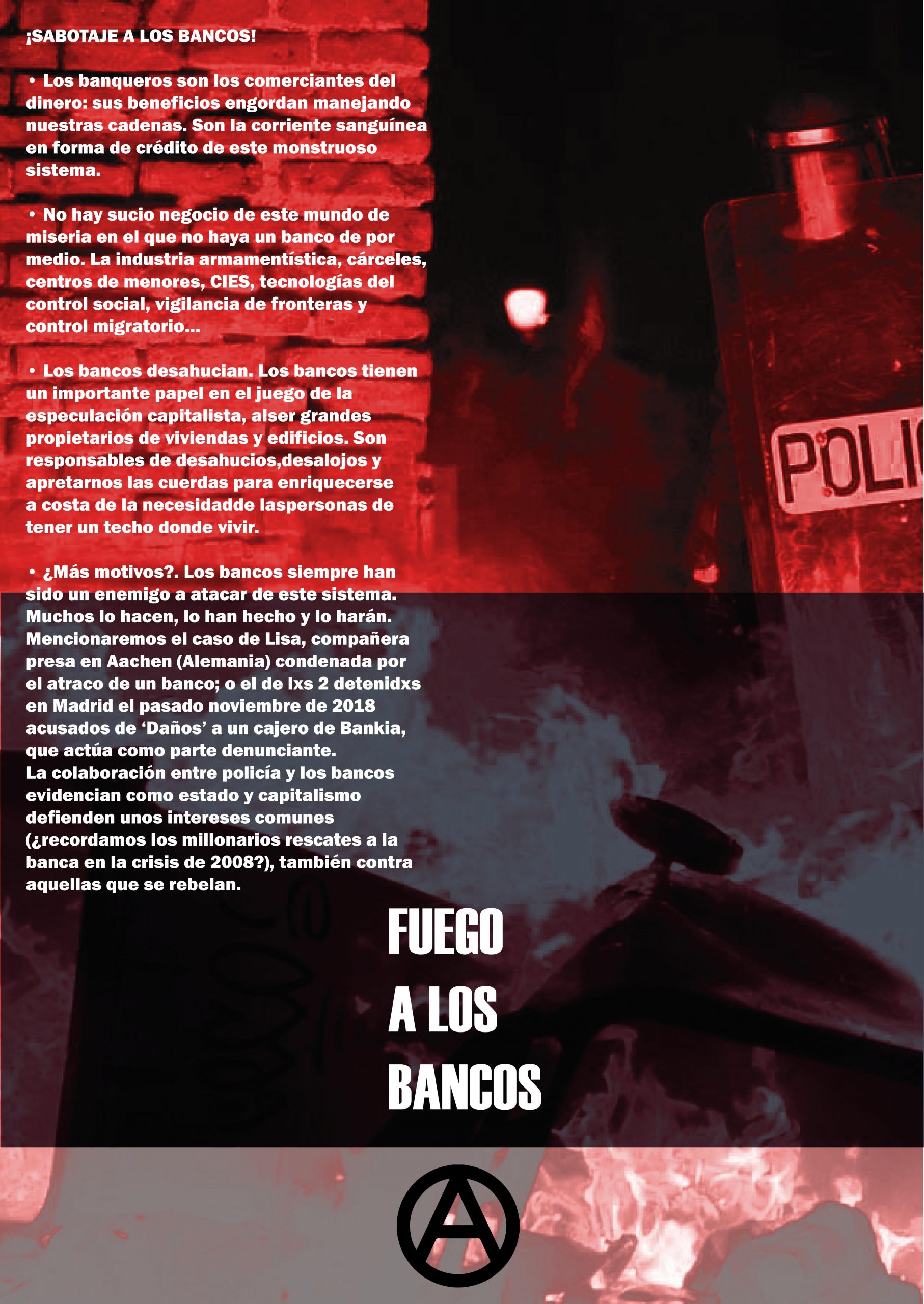 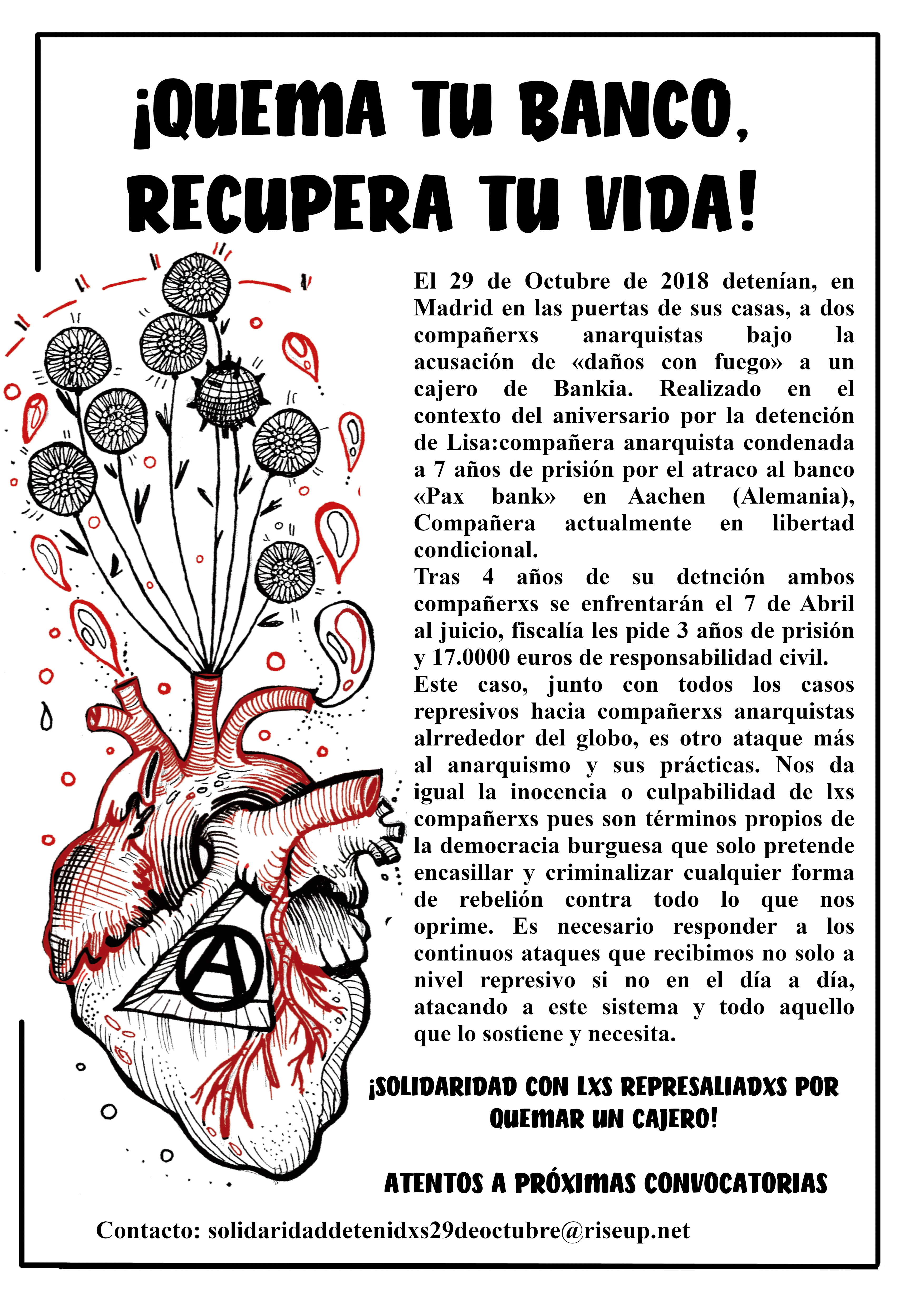 On October 29th, 2018 two anarchist comrades from Madrid were arrested accused of a fire sabotage to a Bankia ATM on April 13th of the same year. They have recently received the news that their trial has been dated for April 7, 2022.

The Prosecutor’s Office together with Bankia and Mapfre (the bank’s insurer) are asking for 3 years for Damages and 17,000 euros in Civil Liability. In the police statement, the fact is related to a statement uploaded to counterinformation websites in which the action was vindicated in solidarity with Lisa, sentenced to 7 years (now in third degree) for a bank robbery in Aachen (Germany). They also say that the comrades are recognized anarchists, mentioning identifications at rallies, poster-attachments or arrests in evictions. All this rhetoric is used to justify the ideological aggravant since the comrades, being anarchists, hate the banks, and Bankia in this case would be a victim of this “ideological hatred”. END_OF_DOCUMENT_TOKEN_TO_BE_REPLACED “Never having approached drugs, being very clear about his ideas, and his physical and mental strength have helped him to survive in prison, despite the FIES. Almost all of his comrades have died. He survived a genocide” explains in Oviedo the companion of the anarchist prisoner.

Elisa di Bernardo went to Oviedo yesterday to tell the situation of her colleague Gabriel Pombo da Silva. Invited by the group Higinio Carrocera, in collaboration with the local Cambalache, taking advantage of her visit to Pombo to the prison of Mansilla de las Mulas in León, Elisa gave a very complete account of both the legal situation of the anarchist prisoner and his life and struggle in his more than 30 years in the prisons of the State. It was a talk that not only served to have information about Pombo but also to show how, inside the prison walls, “democracy” disappears and one enters a dark world, subjected to physical and psychological torture, to personal revenge by judges and jailers, to prisons inside the prison (FIES). In addition, Elisa gave us perspective and context on how inequality, misery, injustice and poverty consubstantial to the capitalist and statist system manufactures criminals.

Elisa began the talk by taking out of her backpack three important books to know the situation of prisoners and the world of the anti-prison struggle: “Extrema Indigencia, extrema violencia”, “Para que no me olvides” by Madres Unidas contra la Droga and the Informe sobre la Tortura en el Estado español that Elisa explained was censored by the police, as it tells the saddest time of the FIES regime (files of inmates of special monitoring).

After this bibliographical introduction Elisa di Bernardo spoke about Gabriel Pombo’s life trajectory. “They lived in Vigo in a shack until they emigrated to Germany to earn a living. There he discovers a new world and also begins to know the instinctive solidarity among the poor. The first political question Gabriel asked himself was: “If my father builds houses, why don’t we have a house? END_OF_DOCUMENT_TOKEN_TO_BE_REPLACED