As time moves on and the seasons change, we approach once again the June 11th International Day of Solidarity with Marius Mason & All Long-Term Anarchist Prisoners. Another year has passed, and many of our dear comrades remain captives of the state, subject to its daily subjugation, isolation, and brutality. June 11th is a time to stop the ever-quickening rush of our lives and remember.

WE ARE ALL POTENTIAL PRISONERS

With June 11th, we desire to deepen a critique of prison that challenges the distinction between prisoner and supporter. For us, these differences are conditional: we, as anarchists, see ourselves as potential prisoners. Some of us have been, some of us will be. This is the basis of our solidarity – a recognition of ourselves in the plight of those in prison.

The continuum of prisoner and supporter can only be seen as tenuous if one looks to the examples of imprisoned and formerly-imprisoned comrades: Marius Mason’s activity with the Anarchist Black Cross, Bill Dunne’s liberation of an anarchist prisoner, Pola Roupa’s attempted helicopter rescue of anarchist prisoners, Claudio Lavazza‘s actions to liberate prisoners. The connections deepen when one considers that numerous anarchist prisoners are locked up for attacks on prison, judicial, and police institutions; and that others connect us to prisoner uprisings from California and Alabama to Greece and Italy. 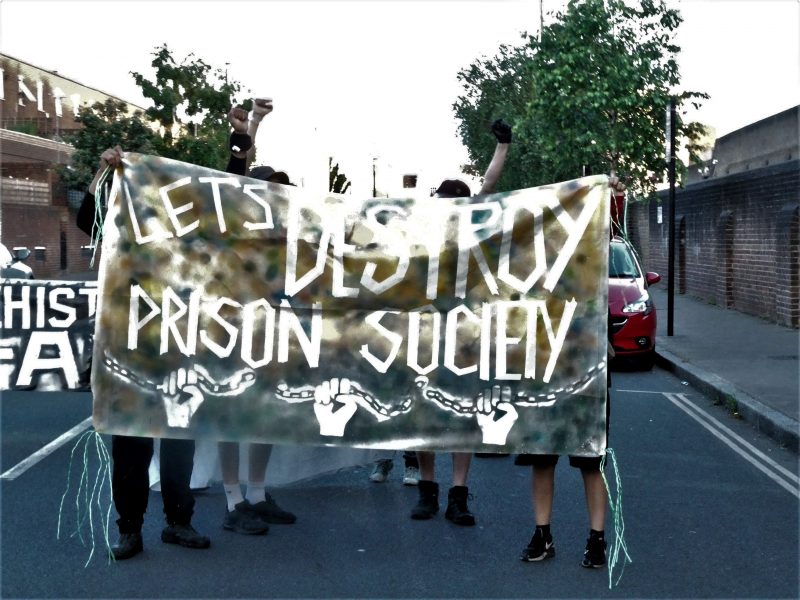 We have always said that “solidarity means attack,” but we must recognize that slogans do not offer us a way forward in our struggles. If “attack” becomes confined to a restrictive set of activities, we cut ourselves off from a more expansive vision of anarchist struggle. If we move beyond mere repetition of fetishized actions, what possibilities open up to us? Solidarity means attack, yes, but what else does it mean?

In this vein, we’d like to offer our suggestion: instead of doing what you always do for June 11th, try something new. If your focus is usually on offering material aid to prisoners, take up action against some tentacle of the prison system in your town. If you’re usually out in the night attacking, try doing something to directly support an anarchist prisoner. The point is not to further entrench the false dichotomy between direct action and care work, but to challenge our ossified roles. By trying new things, we may come to recognize that the walls that separate the dedicated supporter and the dedicated saboteur were always illusory, that our imaginations are more expansive than we thought, and that we individually and collectively are capable of more than we give ourselves credit for.

Central to our vision of solidarity is maintaining the lines that connect us to our companions behind bars. We should keep alive the projects, fights, and movements to which they’ve sacrificed so much of themselves. Our connections with anarchist prisoners start from a point of commonality – that we share a desire to directly transform the world in a liberatory and egalitarian direction. Thus, our solidarity should root itself in bringing prisoners into our projects and investing ourselves in theirs. We want released anarchists to come out into a world of vibrant debate, collaboration, and action; and we want to foster that as much as possible behind prison walls as well. This can be as simple as sending news of local struggles to a prisoner or printing prisoner statements to share at events. As with any aspect of solidarity, we are limited only by our imagination and commitment.

While we should support prison struggles when they happen, we should be careful not to put the burden of struggling against the prison system on prisoners alone. Those in prison – being in conditions of extreme control, surveillance, and restriction – are in many ways the least able to actively fight winnable battles against prison institutions. Those of us living in relative freedom have opportunities to think strategically about what actions and sites of struggle would have the most positive impact on the lives of people in prison and do the most work to dismantle the prison system. As prison is inexorably connected to numerous corporate and state institutions, enemies are everywhere: where can we win?

Supporting prisoners is also a way for different struggles to converge, as the last several decades have taught us. From the Black Liberation Army to the Earth Liberation Front to Grand Jury Resistors to anti-police uprising defendants to land and water protectors, all struggles for liberation will necessarily lead to state repression and imprisonment. By building up support infrastructure and culture, by making prison a less complete isolation and removal, we strengthen every aspect of challenging this society. We also find each other, learn from each other, enrich each other. 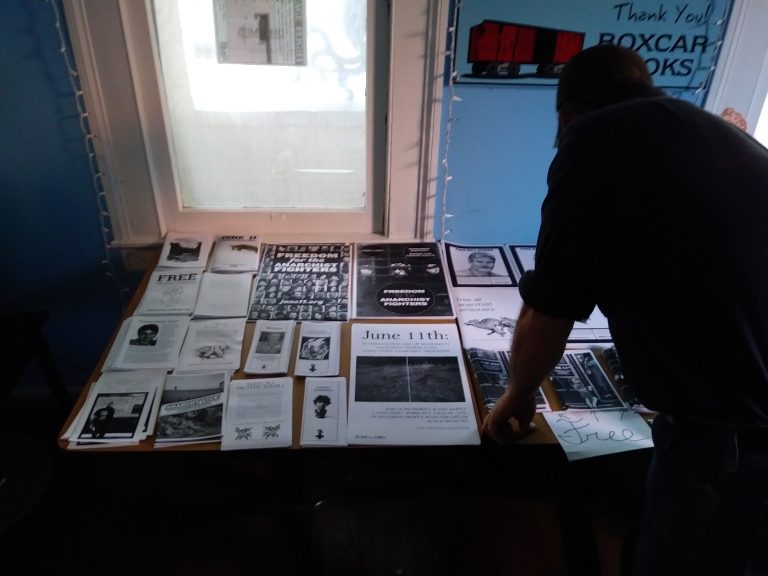 Marius Mason secured his long-fought-for transfer to a men’s prison, likely being the first trans man to achieve such a transfer in the federal prison system.

Italian prison administrators began censoring Alfredo Cospito’s correspondences in October. Authorities charged him with incitement to commit crimes, citing his writings in the anarchist newspaper Vetriolo. This repression is part of Operation Sibilla, where Italian police have raided numerous anarchist spaces and shut down websites surrounding Vetriolo to prevent the publication and spread of its subversive ideas.

Claudio Lavazza received a hit of five years to his twenty-five-year sentence. His legal support is trying to secure an earlier parole date.

Eric King went to federal court on charges related to a situation in which he was attacked and tortured by prison staff in 2018. The jury found him not guilty and his legal team is now filing a suit against the prison administration. As of this writing, Eric is the process of being transferred and the continued target of a vindictive prison system.

Sean Swain was also denied parole, which he argues is retaliation by prison staff for comments he made and civil suits he has filed against them. He has since been transferred from Virginia back to OSP Youngstown in Ohio. His supporters suspect he will soon be transferred again.

More and more defendants from the uprising of 2020 are getting sentenced, some have been released and other going on to serve their terms. Some are still pretrial and facing lengthy sentences. The effects of this repression will still be felt for many years. May the quality of our support for these defendants make us stronger than we were before.

In Chile, anarchist Joaquín García was transferred along with several subversive prisoners to the Rancagua maximum security prison last June. In October, he along with 20 other prisoners were attacked by about 50 guards, after which he was put in solitary confinement for 24 hours. This followed their declaration of solidarity with Pablo “Oso” Bahamondes Ortiz, who was facing weapons and explosive charges, and was subsequently sentenced to 15 years. Francisco Solar, another anarchist locked up at Rancagua, was hospitalized last autumn due to the advancement of undiagnosed diabetes. He and Mónica Cabellero were accused of multiple bombings, after his DNA was surreptitiously taken during a graffiti arrest, and have been in preventative detention since July 2020. In December of 2021 he accepted responsibility for bombing police structures, in solidarity with the revolts beginning in 2019 and those harmed and murdered by the police because, “no one and nothing is forgotten.” Days later, Mónica was in a fight with another prisoner that her family called a provocation set up by the prison. At the time of this writing, information is not yet available on the sentencing or a release date for these two anarchists.

Siarhei Ramanau, Ihar Alinevich, Dzmitry Rezanovich, and Dzmitry Dubousky were sentenced early this year to 18-20 years each for direct actions against Belarusian government targets after preliminary incarceration since 2019. After sentencing it was revealed that they were tortured by guards, resulting in a confession. As anarchism has become criminalized under the ongoing dictatorship, at least two other groups are facing several years each for their dissent.

Russian authorities have sentenced teenage anarchist Nikita Uvarov to five years for a conspiracy to blow up the Federal Security Service in Minecraft (yes, the video game) and constructing small fireworks. Two of his peers received probational sentences for their alleged crimes at the age of 14. Moscow ABC has reported that repression has increased (though there are no new proceedings against anarchists and antifascists there) and they have begun reorienting resources toward humanitarian efforts as Russia continues its murderous invasion of Ukraine.

The Anarchist Black Cross of Dresden, too, has reoriented itself toward providing support to those fighting in and fleeing from Ukraine. This reimagining of their support means helping finance solidarity forces like “The Black Headquarter” that have assembled volunteers to oppose the Russian forces and also attempt to carve out autonomous space in opposition to the Ukrainian state itself. Under the banner of the black flag, Balkan anarchists and anti-authoritarians are uniting against nation-states’ concepts of war and peace. It’s worth noting that chapters of the Anarchist Black Cross were established in Ukraine in 1918 as an adjunct to the Black Army that was fighting both the Soviet and Czarist forces invading from Russia.

In England, Toby Shone was sentenced to almost four years on drug charges related to psychedelics in his possession (during coordinated raids of collective anarchist homes) after terror charges failed to stick, related to the alleged operation of counter-info site 325. Despite the government’s failure to attribute membership to the the 325 collective, the Informal Anarchist Federation/International Revolutionary Front, the Earth and Animal Liberation Front, and involvement in related arsons and writings, he still must fight a Serious Organised Crime Prevention Order that would subject him to a heavily monitored five-year house arrest, expressing the evolution of incarceration by an increasingly digitized state apparatus. 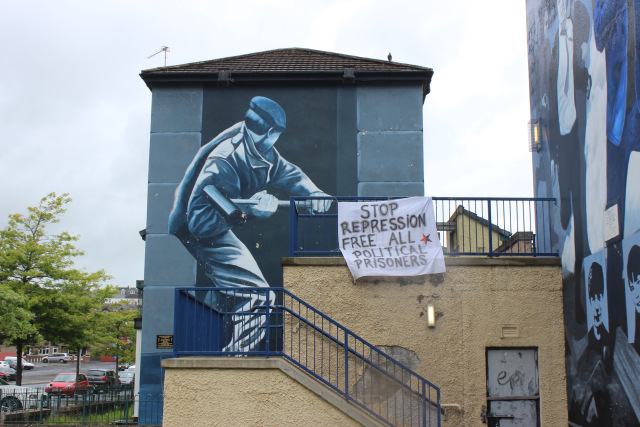 The expansion of home detention and monitoring is not new, but still growing, as the prison society further invades the everyday through technological advances. Warfare too, grows increasingly digital from drone strikes to hacking, while government-sanctioned murder continues in all its finality. We may lack details regarding anarchists struck down or imprisoned in their pursuit of freedom in ongoing struggles in Sudan, Afghanistan, and Syria – still they also move our thoughts and actions. As the state persists in all its punitive perdition, killing and imprisoning, and we find common ground with those who fight in an effort to grow our power and destabilize those that seek to control us – carrying the fallen and imprisoned with us in our relationships with them and through a persistent conflict with the existent.

For ideas on potential activities, check out our blog for years of archived reportbacks. Those looking for materials to print and share can find them at the Resources page. And, most importantly: a list of anarchist prisoners to write to.

We eagerly await the events, actions, statements, and other contributions to this year’s June 11th.