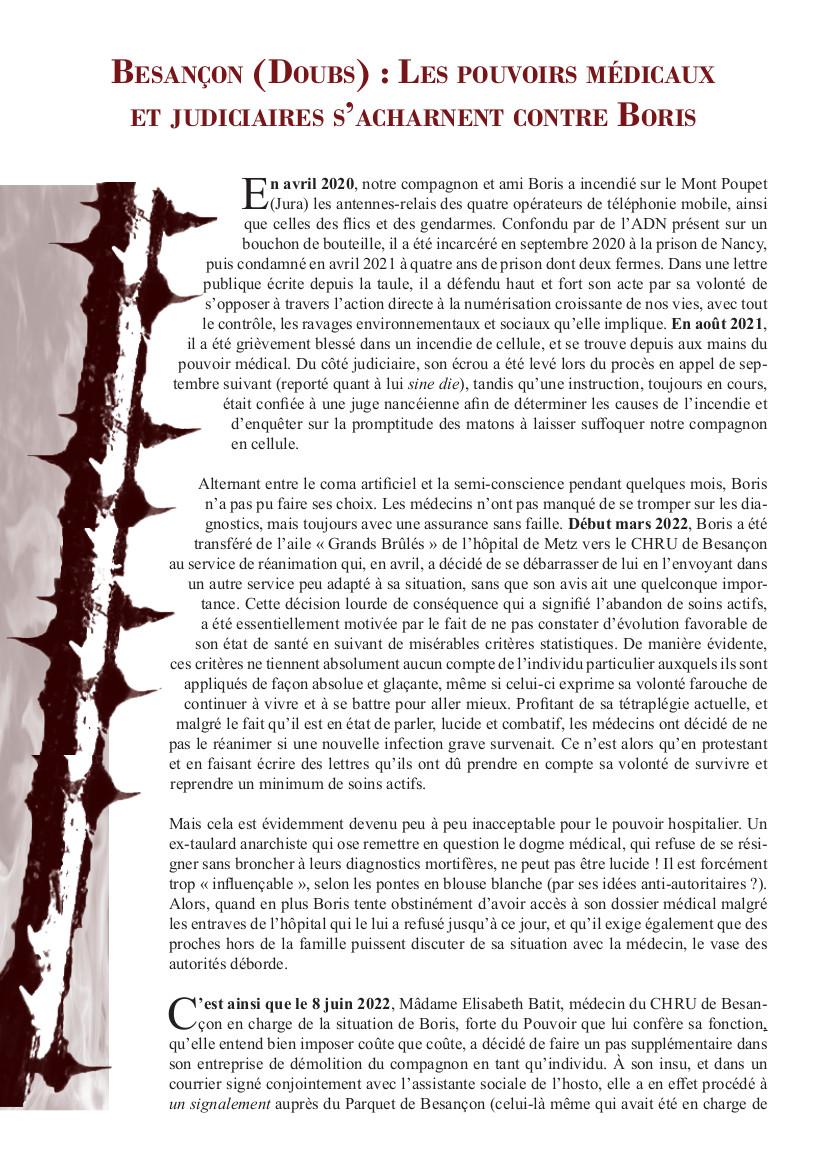 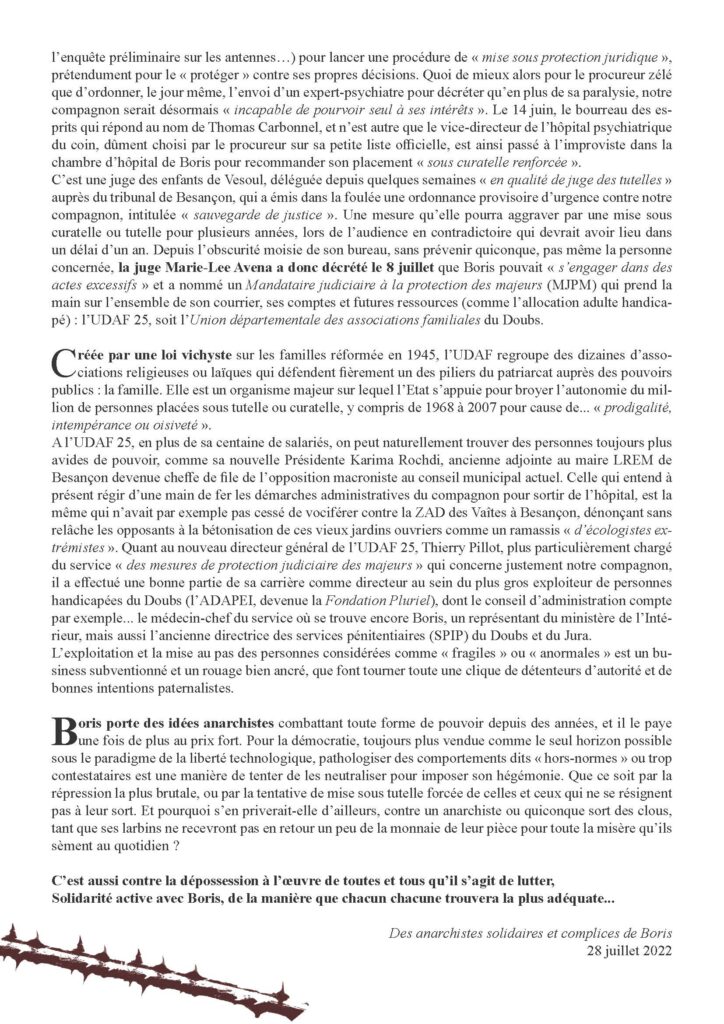 Besançon (Doubs): The medical and judicial powers are relentless against Boris

In April 2020, our comrade  and friend Boris set fire to the antennas of four cell phone operators, as well as those of the cops and the gendarmes on the Mont Poupet (Jura). Identified by DNA present on a bottle cap, he was incarcerated in September 2020 in the prison of Nancy, then sentenced in April 2021 to four years in prison, two of which are unsuspended. In a public letter written from prison*, he defended his act by his desire to oppose the increasing digitalization of our lives through direct action, with all the control, environmental and social ravages it implies. In August 2021, he was seriously injured in a cell fire, and has since been in the hands of the medical authorities. On the judicial side, his imprisonment was lifted at the time of the appeal trial of the following September (postponed sine die), while an enquiry, still in progress, was entrusted to a judge in Nancy in order to determine the causes of the fire and to investigate the eagerness of the screws to let our companion suffocate in his cell.

Alternating between artificial coma and semi-consciousness for a few months, Boris could not make his own decisions. The doctors were not without mistakes in their diagnoses, but always with unwavering confidence. At the beginning of March 2022, Boris was transferred from the “Grands Brûlés” wing of the Metz hospital to the intensive care unit of the Besançon CHRU, which in April decided to get rid of him by sending him to another unit that was not well suited to his situation, without his opinion having any importance. This decision, which had serious consequences and meant the abandonment of active care, was essentially motivated by the fact that no favourable evolution of his state of health was observed, following miserable statistical criteria. Clearly, these criteria take absolutely no account of the particular individual to whom they are applied in an absolute and chilling manner, even if he expresses his fierce will to continue to live and fight to get better. Taking advantage of his current quadriplegia, and despite the fact that he is able to speak, lucid and combative, the doctors decided not to resuscitate him if a new serious infection occurred. It was only by protesting and writing letters that they had to take into account his will to survive and resume a minimum of active care.But of course this gradually became unacceptable to the hospital authorities. An anarchist ex-convict who dares to question the medical dogma, who refuses to resign himself without flinching to their deadly diagnoses, cannot be lucid! He is obviously too “influenceable”, according to the pundits in white coats (by his anti-authoritarian ideas?). So, when Boris stubbornly tries to have access to his medical file in spite of the obstacles of the hospital which refused it to him until now, and that he also expects that close relations apart from the family can discuss his situation with the doctor, the vase of the authorities overflows.

And so, on June 8, 2022, Mrs. Elisabeth Batit, doctor of the CHRU of Besançon in charge of Boris’ situation, armed with the Power that her function confers to her, which she intends to impose at any cost, decided to make a step further in her undertaking of demolishing the companion as an individual. Without his knowledge, and in a letter signed jointly with the social worker of the hospital, she proceeded to a report to the Public Prosecutor’s Office of Besançon (the same one who had been in charge of the preliminary investigation on the antennas…) to launch a procedure of “putting under legal protection”, supposedly to “protect” him against her own decisions. What better then for the zealous prosecutor than to order, the same day, the dispatch of an expert-psychiatrist to decree that in addition to his paralysis, our companion would be henceforth “unable to provide alone for his interests”. On June 14, the mind executioner who answers to the name of Thomas Carbonnel, and is none other than the vice-director of the local psychiatric hospital, duly chosen by the prosecutor on his small official list, thus passed unexpectedly in Boris’s hospital room to recommend his placement “under reinforced curatorship”.

It is a judge of the children of Vesoul, delegated since a few weeks “as judge of the guardianship” at the court of Besançon, which emitted in haste a provisional emergency order against our companion, entitled “safeguard of justice”. A measure that she will be able to aggravate by putting him under curatorship or guardianship for several years, at the time of the contradictory hearing which should take place within one year. From the musty darkness of her office, without warning anyone, not even the person concerned, the judge Marie-Lee Avena therefore decreed on July 8 that Boris could “engage in excessive acts” and appointed a Judicial Representative for the Protection of Adults (MJPM) who takes control of all of his mail, his accounts and future resources (such as the adult disability benefit): UDAF 25, the Departmental Union of Family Associations of Doubs.

Created by a Vichy law on families reformed in 1945, the UDAF gathers dozens of religious or secular associations which proudly defend one of the pillars of patriarchy with the public authorities: the family. It is a major organization on which the State relies to crush the autonomy of the one million people placed under guardianship or curatorship, including from 1968 to 2007 because of… “wastefulness, transgression or idleness”.

At UDAF 25, in addition to its hundred or so employees, one can naturally find people who are increasingly eager for power, such as its new President Karima Rochdi, former deputy mayor of Besançon who has become the leader of the Macronist opposition in the current city council. The one who now intends to rule with an iron fist the administrative steps of the companion to get out of the hospital, is the same one who had for example not ceased to rant against the ZAD des Vaîtes in Besançon, relentlessly denouncing the opponents to these old working gardens being turned into concrete as a bunch of “extremist ecologists”. As for the new general manager of the UDAF 25, Thierry Pillot, more particularly in charge of the service “of judicial protection measures for adults” which concerns our companion, he has made a good part of his career as a manager within the biggest exploiter of disabled people in the Doubs (the ADAPEI, which has become the Pluriel Foundation), whose board of directors includes for example… the head doctor of the service where Boris is still, a representative of the Ministry of the Interior, but also the former director of the penitentiary services (SPIP) of Doubs and Jura.

The exploitation and subjugation of people considered “fragile” or “abnormal” is a subsidized business and a well-established mechanism, which is run by a whole clique of authority figures and paternalist good intentions.

Boris has been carrying anarchist ideas against all forms of power for years, and he is once again paying a high price. For democracy, increasingly sold as the only possible horizon under the paradigm of technological freedom, pathologizing so-called “non-standard” or overly challenging behaviors is a way of trying to neutralize them in order to impose its hegemony. Whether it is by the most brutal repression, or by the attempt to put under forced guardianship those who do not resign themselves to their fate. And why should it deprive itself of this, against an anarchist or anyone who steps out of line, as long as its lackeys don’t have scores settled for all the misery they sow on a daily basis?

It is also against the dispossession of all that it is a question of fighting,
Active solidarity with Boris, in the way that each individual will find the most adequate…

Anarchists in solidarity and complicity with Boris
July 28, 2022