We address this call to collectives and individuals from all around the world to join the combative defense of PROSFYGIKA against the imminent repression. The attempted evacuation of our neighborhood must be turned into a central event of resistance and a victory against political power and the gentrification of our neighborhoods in the metropolis. 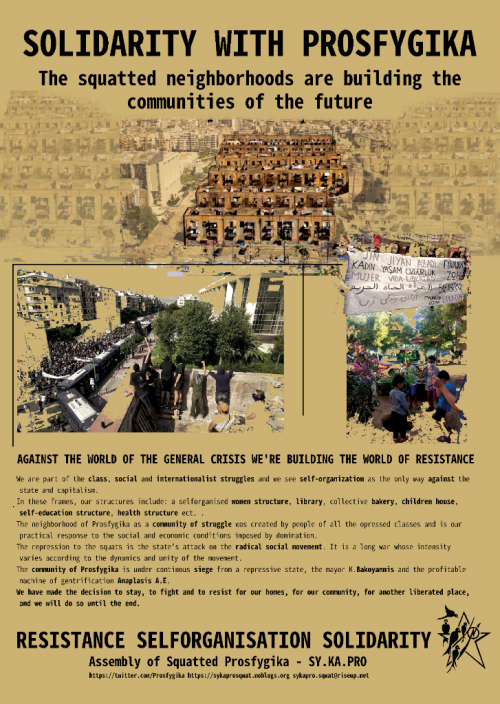 WHAT WE INVITE YOU TO DEFEND:

The building complex of Prosfygika was built in 1933 for the refugees coming from Asia minor.

In the conditions of the time, a vibrant working class neighbourhood with communal characteristics emerged. Today,it is one of the biggest building complexes in the center of Athens, which is still not gentrified and exploited by big investors or the state. It is a place of strategic significance, since it is located between the two ‘pillars’ of authority – the Supreme Court on one hand and the Police Headquarters on the other.

Within this socio-spatial frame, some militants, who were already living in the neighborhood as squatters, decided to organize. In 2010 they initiated the Community of Squatted Prosfygika, having as its central decision-making political organ the Assembly of Squatted Prosfygika (SY.KA.PRO.). A communal body for everyday life and political struggle. END_OF_DOCUMENT_TOKEN_TO_BE_REPLACED

Since yesterday morning, our comrades of Rigaer94 in Berlin are under attack and they are resisting against german police in order to protect their house and their struggle.

As Prosfygika (Refugees) being under a constant threat of state repression and exploitation we consider as our minimum political duty to stand in solidarity with our comrades who are fighting against the modern Freikorps.