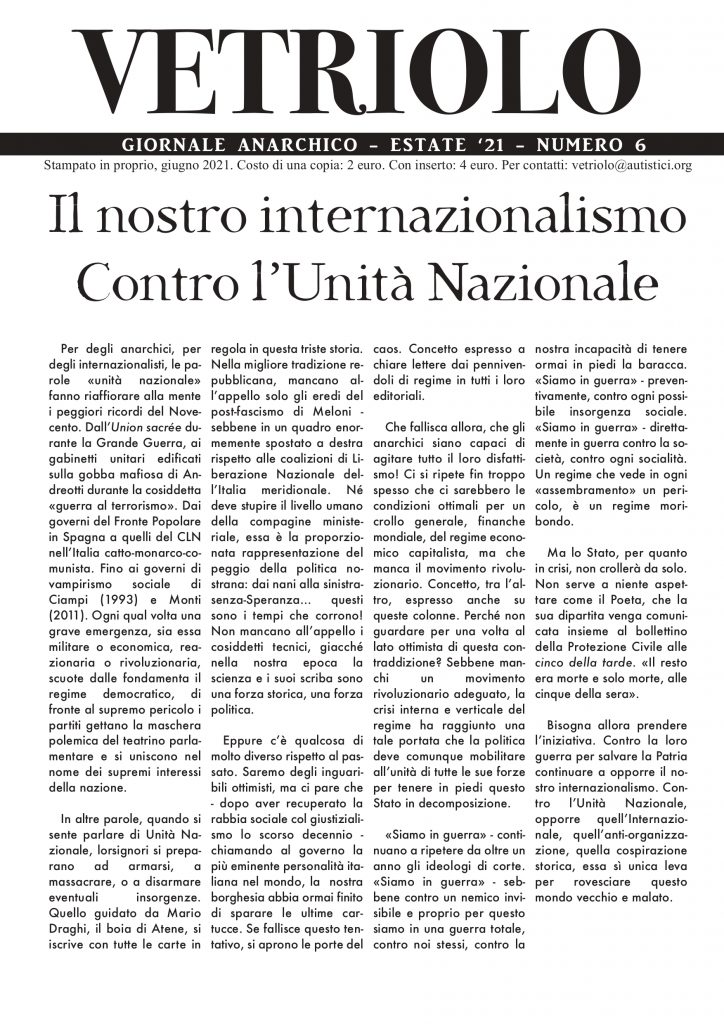 Our seventh issue (including issue #0) sees these columns return, in many ways, to our classic format. Nine months ago, the unprecedented release in the form of a wall-newspaper (issue 5) was part of our need for communication and a proposal for an instrument to break, materially, the pandemic home isolation; a sheet of paper, a cry on the wall to pierce the silence of the curfew. But the project of “Vetriolo” has always been in a laborious sowing of analysis and provocations, suggestions and insights, the study and understanding of the existing, against the commonplace and the foolish boast of ignorance, in order to its negation, its destructive overcoming in a revolutionary sense.

And so we have returned to dealing with history and philosophy, economics and politics, analysis of the present and dissection of the future. Starting from our first page, which wants to be, in its brevity, an immediate attack to the politics of National Unity – a horrible concept for internationalists.

The whole is, we would not say summarized, but further deepened and expanded by a long insert by Silvio Bellico ranging from the analysis of historical times to those that as we say run today, in the context of a firm conviction: the anarchists of today and tomorrow must necessarily undertake what has not yet happened.

Convinced that the state, however much in crisis, will not collapse on its own. It is no use waiting like the poet, that his demise is communicated along with the Civil Defense bulletin at “cinco de la tarde”. “The rest was death and only death, at five in the evening.”

– Our Internationalism. Against National Unity
– Fire & Phlegm. Heat, mood & disease
– Science and State
– Patricia de la Ville
– Economy of Misery
– Lest we be dumbed down. On the subject of the appellate ruling of the Scripta Manent trial.
– Sante Pollastro and Revolutionary Violence
– Stories (by Alfredo Cospito)

Content of the insert “What has not yet happened”, by Silvio Bellico:

– Introduction
– Anarchy is… or is not…
– I stagger but do not give up: crisis and collapse of the State
– Chronicles from the State at the time of… capitalism
– Where there was grass there is now a city… and vice versa
– Class is not water
– Critical revolution and criticism of the revolution
– No gulf between individual and revolution
– If hope is the last to die, authority will die first!
– Conclusions

For requests for copies: vetriolo@autistici.org