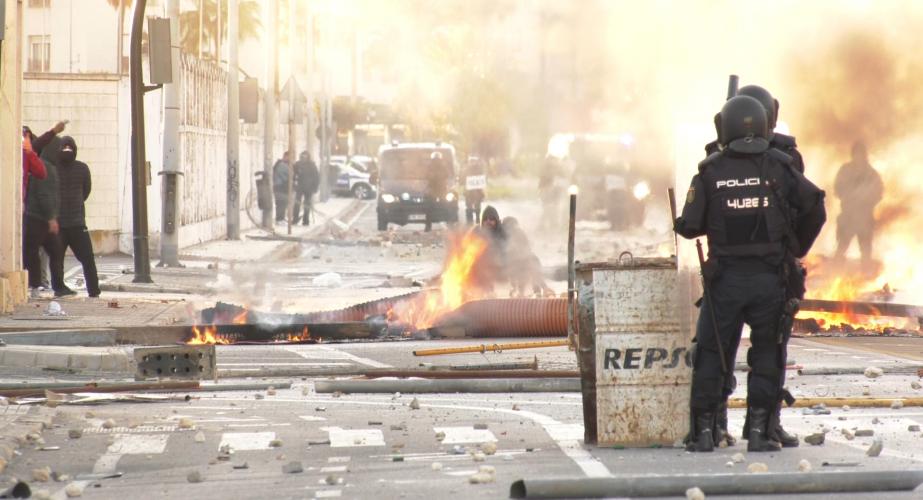 The search for freedom implies the attempt to establish and develop practices in that sense. Breaking with imposed directions, dogmas and predetermined schemes is essential in the construction of anti-authoritarian relations and in the strengthening of these.

Multiformity in terms of action (and not only) is circumscribed in this way of understanding and carrying out the struggle. It is an expression of freedom that denies singular rigid behaviors and ways of doing things, as well as encouraging imagination and autonomy.

It is also a rejection of specialization and specialists who, as we have seen, sooner rather than later become leaders who become enlightened vanguards. It was and is recurrent to see how the armed apparatuses that perpetrated significant actions became the leadership of an organization or the part of a movement that arrogated, through the use of arms, its representation, demonstrating a militarism that we are alien and contrary to.

On the other hand, the multiformity has managed to extend the propaganda in a considerable way. By means of banners, graffiti, incendiary barricades, explosives and gunfire, anarchic ideas have spread, finding spaces where they are welcomed and put into practice. This is where the importance of what has been called “reproducible actions” comes into play, generally associated with “small actions” that do not require greater risk or that would not entail the questioned prior specialization. “Reproducible actions” would have the advantage of being carried out by anyone, which would increase their possibility of extension, thus generating greater impact and/or effectiveness in achieving a given objective.

However, the multiformity of actions has become a sort of unquestionable paradigm that – like all paradigms – prevents us from seeing beyond. It has become the absolute truth, limiting discussion and making it impossible to talk about issues that have become “taboo”.

It is essential, then, to be able to identify these ties and break with any paradigm that prevents us from questioning what we want or restricts us in any way. We are here, among many other things, to break down paradigms.

One of the issues that have been hidden or left aside by this “paradigm of multiformity” is related to the need and importance of complex or large-scale actions. Cóspito is clear and accurate when he says: “I have to talk about “surprising” actions because nobody talks about them, they are not even remotely included among the possible hypotheses. I don’t think it’s because of fear, but because it is usually thought that one needs to be a specialist… “1

Beyond the causes that provoke it, what is noted is the existence of the omission of a subject that, in my opinion, is fundamental.

The importance of such actions, as well as the need to encourage and analyze them, is directly related to the intensification of our attack and the possibility of dealing hard blows to power.

Dealing with this aspect together allows us to share visions and opinions that will open up new paths and possibilities. It also makes it possible to shatter imaginaries that are generally associated with it, such as the fact that it is necessary to be a specialist to carry out a complex action. It is enough to delve into this issue to realize that behind every major action there were no “specialists” or people outside anarchic environments who had received “special training”. It turns out that they are comrades like any other, that they participate or participated in the activities like any other and that, most of the time, they carry out “simple” actions like any other. Attempting to distance these comrades by understanding them as “specialists” responds, in part, to the remnants of the leftist logic that separates the fighters into specific roles and functions.

On the other hand, complex actions entail risks that are not minor and meanings that can be decisive. They demonstrate a willingness to risk freedom and life and also to inflict considerable wounds and damage, making it clear that it is not a game or a passing fad. Together with the strengthening of individual and collective conviction (fundamental in the development of the struggle), the importance lies in the signal given to the enemy. A strong signal that reflects seriousness in the path undertaken, which is not only perceived by the power and its representatives, but also by society as a whole, shaken by the action. The impact, therefore, is undeniable, allowing the propaganda to be amplified to unsuspected corners, which, ultimately, is one of the central purposes of major actions.

One of the aspects that attracted and still attracts me to anarchy is the irrepressible attempt to do what is said, to take the slogans into the realm of the possible. And the above is framed in that sense: if we talk about waging war on the State, let’s go beyond words and go for it. Let us take on the weight of such a challenge and assume all that it entails.

I fully agree with comrade Joaquín García when he says: “How much can we say about our, let us say, ideas, however radical or extreme they may be, if they have no weight on the reality we intend to destroy or do not certainly stress the status quo, even worse, if they are so maneuverable by the power or assimilated by the masses. “2

Marking the difference within a necessary coexistence.

Are large-scale actions and “simple” actions the same thing? Is placing an explosive in a police station the same as scratching a wall or painting a canvas?

However, “The paradigm of multiformity” openly ignores this difference, making complex actions invisible in the process and reflecting another of their risks and dangers.

For some time now, they have been given equal importance, which empties an anarchic practice in general of analysis and content and wears out interesting projects based on the offensive. I am referring to the experience of the FAI-IRF which, in my opinion, lost much of its weight and forcefulness from the moment when street barricades, scratchings and banners began to be claimed under its acronym. In relation to this, in the magazine Kalinov Most we affirmed; “The limits of the absurd were taken to the FAI-IRF’s vindication of scratchings on some walls, losing all sense and notion of words and their meanings, showing us and showing us the limits of multiformity “3.

The complex actions such as the armed attack on Adinolfi and the car bombing of a Microsoft headquarters in Greece, which saw the birth of this project and which filled with enthusiasm several insurrectionists around the world, soon gave way to painted banners and other simple actions that were vindicated with the same tone and acronyms and received the same coverage in the pro-unity press as the major attacks. The problem was that such interventions, which did not require much planning or risk and had little impact, began to prevail, soon taking over a large part of the counter-information.4

Evidently, this brought with it a stagnation in anarchic actions which, with few exceptions, have not been able to qualify themselves. As Joaquín García rightly points out: “Polyformism hides a demobilizing trap.”5

“The paradigm of multiformity” has led to the impossibility of going beyond, prioritizing minor action with the excuse, among others, of its capacity for reproduction. However, the challenge lies in making large-scale actions reproducible, based on the assumption that there are no specialists or anything like that. That only the will is enough.

Finally I want to make it clear that I understand that the multiplication of “simple” actions and therefore multiformity, are indispensable within the anarchic struggle, but this (multiformity) should not omit the existence of more complex actions with the crude excuse that they are carried out by a specialized apparatus alien to anarchic spaces and environments. It is necessary the coexistence of the different actions and to be able to value them from that, which will allow, to a certain extent, to break with the “Paradigm of multiformity” and to walk towards the intensification and deepening of our attacks.

(1) Alfredo Cóspito: Response to the magazine “Caligine”-2021
(2) Joaquín García: “on the need to endow our existence with a dynamic vitality.
a dynamic vitality.” In Kalinov Most 5, October 2019.
(3) “Our media, our communications.” Reflections on
counter-information and the apathetic press, in Kalinov Most 7, December 2020,
p. 29.
(4) One of the few exceptions is the website “Social War News” which deals only with complex
which deals only with complex actions, publishing its communiqués and making a brief
and making a brief analysis of each one.
(5) Joaquin Garcia “On the necessity…” in Kalinov Most , October 2019.