Yesterday evening Ermann was released and today Emanuele will be released.

The boys have decided to pay the bails together with the help of the solidarity funds, the comrades, friends and relatives.

Only the bails of Danilo, Albo and Beppe (the last imprisoned) remain to be paid.

Danilo has decided to leave after June 3, because he doesn’t want to miss his university exams, Albo stays with him waiting for him in the same module.

We hope that solidarity will fill the boxes with the money needed to free them.

See you in the streets!

Since February 27, 2021, four comrades have been in jail at BRIANS I in Martorell (BC). Initially the arrests were 8. They are accused of attempted murder and constitution of a criminal group, for participating in a demonstration in Barcelona where for 30 seconds the side of a motor vehicle of the urban guard burned. A guard was on board and got off unhurriedly.

Clearly a set-up. Set up by the state to break up the demonstrations that, in the midst of the COVID confinement, were agitating the main Spanish cities. In solidarity with the rapper Pablo Hasel, who is still detained for crimes of opinion.

Iron fist and hype, this is the response of the State. A frame-up that recalls others. From Sacco and Vanzetti to Sole, Silvano and Baleno, passing through Pinelli and Valpreda. In fact, the defendants are foreigners (Italians) in the face of united Europe, are anarchists, squatters, without a steady job and without family in Spain, of course.

The GIP of the proceedings (Maria Eugenia Canal Bedia) – known friend of the police – has done everything to delay the approach of the trial that could reveal the inconsistency of the frame. Always stretching to the limit the waiting time of each act, coming to hide for 45 days a firemen’s report that exonerates the boys. Accused, among other things, of sharing the battle cry “Chihuahua” and of distinguishing themselves by “the ochre-colored lighter” and other such amenities… 14 months of preventive detention, pending trial. This is the Spanish democracy evidently still afflicted by totalitarian syndromes. END_OF_DOCUMENT_TOKEN_TO_BE_REPLACED 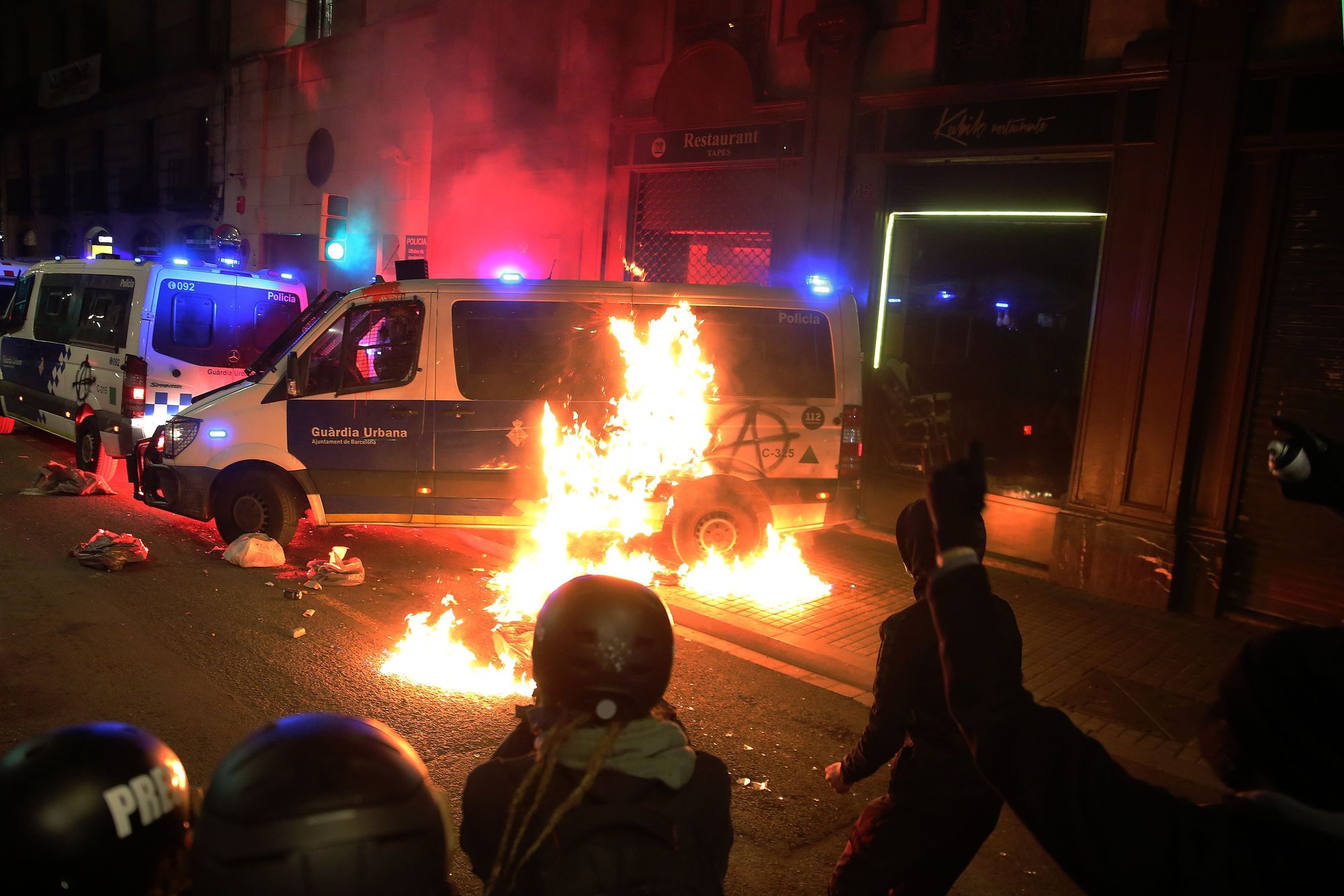 Postcard Barcelona SUCKS! In the last years we have seen, from near and far, how the Catalan institutions have managed to continue selling an image of “inclusive city”; when it is an ultra-capitalist city that expels and mistreats its own population (not to mention the thousands of migrants who are sold at ridiculous prices, or are dragged into the vilest prostitution) in order to have something to eat. Colau is a fake who plays to establish pacts with the most aberrant powers, to exercise her second mandate as mayor. She skillfully negotiated with many squatted spaces -to legalize them- and thus reduce her refractory actions against the System. Unfortunately for us, the tactic has been successful: they have “tamed” us. The once called rose of fire only burns when interclassist nationalism orders it to do so. And there is no lack of sheep…

On February 27th, in the context of a demonstration (promoted by the most Stalinist and retrograde communist authoritarianism) they arrested a group of comrades, previously arrested by the organizers themselves – read Arran, the youth of the CUP – in a disgusting set-up, tending to blame “Italian anarchist insurrectionalists”, for the riots resulting from the imprisonment of the unclean rapper Pablo Hasel. We do not forget that it was an act of revenge for a previous set-up in Girona. The so-called ‘purge-of-Girona’ perpetrated by anti-anarchist groups to sweep out of their city those who did not conform to their political interests… Currently 6 of our people are still in prison, in the territory dominated by the Catalan pseudo-state. And there is a silence (complicit) on the part of an infinity of supposedly “libertarian” collectives, about this alarming situation. It is time to shout ENOUGH!

The so-called “casals catalans”, numbering a hundred in 40 countries, are good targets to express our rage. And there are also many economic interests in Catalonia, for those who are willing to do a little digging. Any of these sites is a good place to remind these cretins that active international solidarity with our prisoners of the Social War is not just words: LET’S ATTACK! That is why this OCTOBER 27th, eight months after the captivity of our comrades, we will make the voice of those who have tried -in vain- to muzzle, heard. Organize your group, plan a fire, an attack, a protest canvas, a sabotage, or whatever you want; but do not remain impassive? There is too much posturing among so many verbose groups that do NOTHING. To the street already the kidnapped ones, for that story of the damned burned police van…

NOT ONE MORE MINUTE OF SILENCE!
SIX ANARCHISTS BEHIND BARS! BOURGEOIS AND COMFORTABLE CATALONIA, DIE!
AND LONG LIVE THE BLACK INTERNATIONAL!

Some Pissed Off Insurrectionists (FAI/FRI) 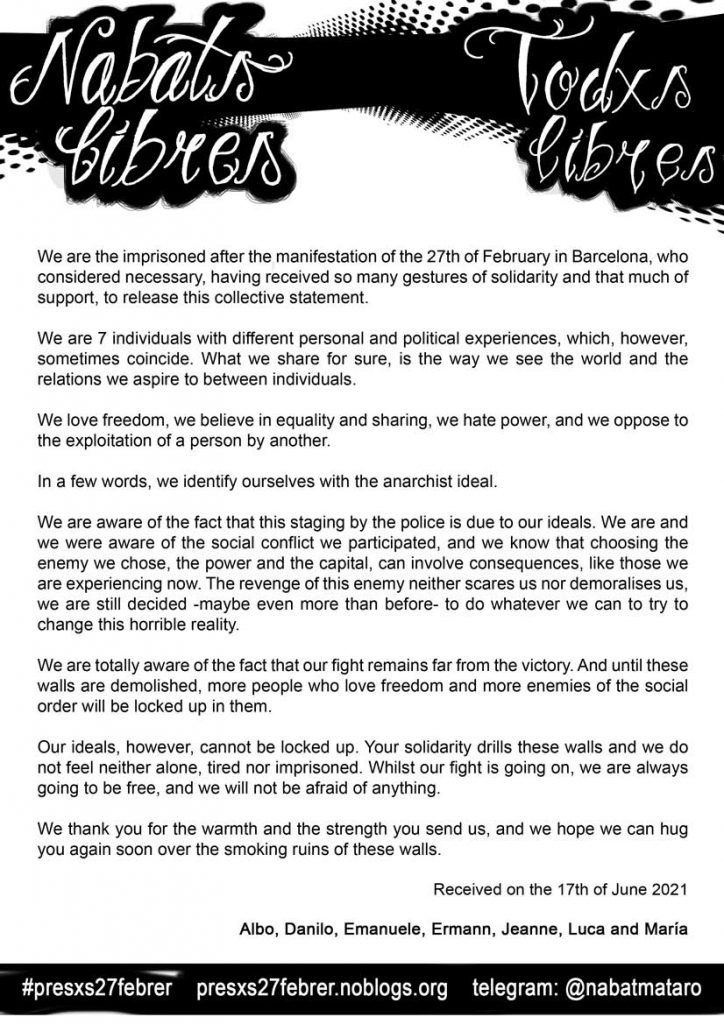 Note: Seven comrades arrested after the February riots, nine nights of riots after the detention and imprisonment of the communist rapper Pablo Hasél, who was charged with prison for the political themes of his songs. Shopping districts are looted, police stations attacked, hundreds of containers burned, and motorbikes and cars were in flames, one police van was burned by molotov cocktails and a big hotel in the Rambla was vandalized.