Answering a call for retaliation against the murder of Tortuguita, we burned a large excavator in Portland yesterday night.
Tortuguita died trying to kill a cop in defense of the Weelaunee forest. Never let this be forgotten.
With these flames we honor their bravery. With smoke we send a prayer into the night that the next cop won’t be so lucky.
We attack the same machines that threaten the forest in Atlanta and everything wild.
FIRE TO THE EARTH DESTROYERS
Until every cop is dead and all they defend burnt to ashes. 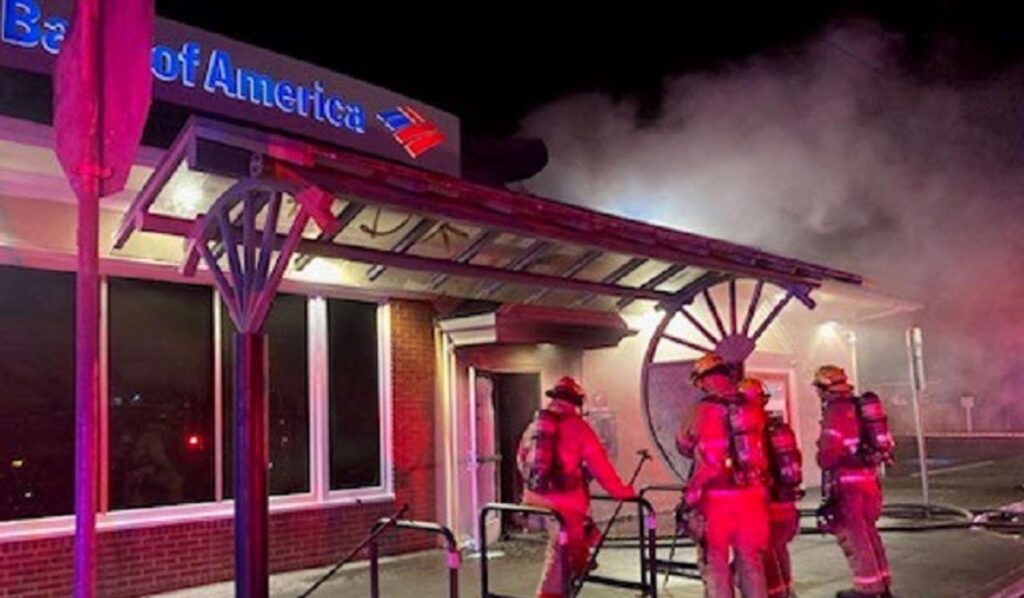 Last night I broke into a Bank of America in Portland, Oregon and started a large fire. According to news reports, the fire grew quickly and took firefighters more than an hour to extinguish.

I attack for revenge against capital for the hell it creates, to break the illusion of police control that usually protects it, and just because I can.

Bank of America funds the Atlanta Police Foundation and a thousand other projects of control. Earlier that day, the six friends in Atlanta charged with “domestic terrorism” were released from jail. May this fire bring them some warmth in winter.

On the night of November 21st, a KONE service truck was set ablaze while parked behind their corporate office in Milwaukie, Oregon.

This fire was lit for anarchist prisoner Alfredo Cospito in solidarity with his hunger strike against the 41Bis regime in Italy as part of the international call to action.

Cospito was arrested in 2012 and remained imprisoned by the Italian state ever since. According to prosecutors he was linked to various clandestine actions and membership in the Informal Anarchist Federation (FAI). Throughout his imprisonment he has remained committed to the anarchist struggle by texts and interventions. Eventually, on the 5th of May, he was cut off all contact to other humans. From that day on and indefinitely, he lives under the so called 41Bis regime, in a blatant attempt by the Italian state at total isolation.

The multinational corporation KONE a manufacturer of elevators, escalators, and door systems has contracts with prisons and military facilities worldwide, including the Aviano NATO Air Base in Northeastern Italy, through their subsidiary KONE SPA.

Through the practice of revolutionary solidarity we aim to break the isolation of the prison cell. By attacking the corporate infrastructure that enables the system of mass incarceration it is our intention to expand the struggle against prisons beyond the prison walls. To ensure that no prisoner struggling for freedom does so in isolation

Solidarity with Juan Sorroche, Ivan Alocco and Anna Beniamino who have joined Alfredo Cospito on hunger strike against the 41Bis regime.

Solidarity with the Alabama prison movement that recently completed a 3-week work stoppage that effected all 13 prisons in the Alabama Department of Corrections system.

A communique and call to action:

Early November 20th, several hours before the opening ceremony of the 2022 World Cup, we smashed up most buildings at the Adidas North American headquarters in Portland, Oregon. We shattered windows, broke doors and covered walls with paint across the corporate campus, including office buildings, the gym and cafe. Adidas is one of FIFA’s primary long-term partners, and a main sponsor of the World Cup in Qatar this year.

The history of the World Cup is one of death and displacement. Every stadium stands upon the dead bodies of workers who built it. In Qatar, over 6,500 migrant workers from South Asia died during the decade of preparations for the 2022 World Cup, forced to work in slave conditions. The World Cup was made possible by hundreds of thousands of migrant workers forced into labor through a combination of physical violence, threats of imprisonment, passport confiscation, debt bondage, and more. Every World Cup involves the violent evictions and displacement of thousands, replacing whole neighborhoods with stadiums and other infrastructure. The entire operation is protected by huge increases of militarized policing and surveillance, with 3,000 riot cops sent from Turkey, 4,500 soldiers from the Pakistan army and forces from the British Royal Navy and Air Force coming to Qatar to enforce control during the World Cup.

All this is enabled by the huge companies that sponsor the World Cup and FIFA in the interest of profit.

We reject the logics of global capitalism and the state, and the endless violence they create together. All that’s left to do is fight back.

In every city you can find the property and infrastructure of companies complicit in the World Cup. END_OF_DOCUMENT_TOKEN_TO_BE_REPLACED 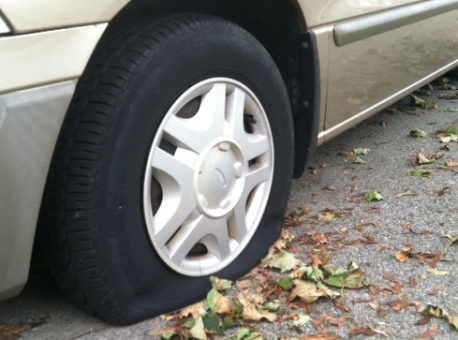 Last night, over 100 tires on large SUVs were deflated in solidarity with recent actions by the Climate Liberation Front. From Portland to Arlington, we see ya.
An awl through the sidewall is quick and quiet.
It was hot as fuck during the day, over 110 degrees, so we took full advantage of the night. The city would never even get this hot if not for the gases these SUVs emit into the atmosphere, and the miles of dark, heat-absorbing asphalt that have been put down for them to drive on.
Fuck cars, fuck industry, let’s make a hot crime summer.
We all grieve in different ways. For us, attack was a fitting ritual to celebrate everything that was, and mourn all that could’ve been.
In loving memory of H.
-angry ghosts
From: Rose City Counter-Info 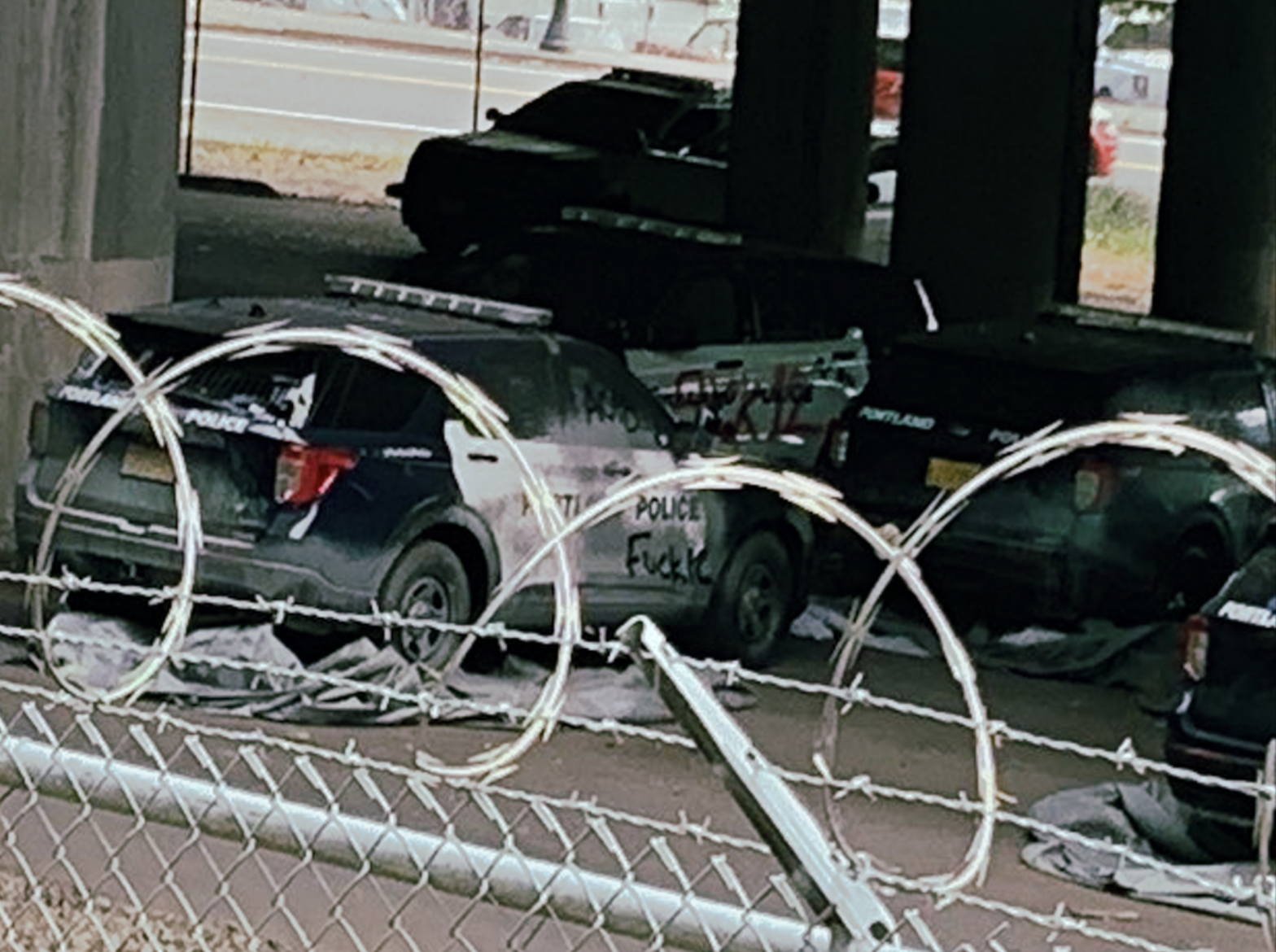 In response to the Portland Police murder of Michael Ray Townsend on June 24, a parking lot containing multiple Portland Police Bureau squad cars was attacked. A hole was cut into the surrounding barbed wire fence, and a dozen vehicles were hit. All cars had their windows, windshields, lights and mirrors smashed, and abolitionists / anarchists messages were painted across their exteriors. A fire extinguisher filled with paint was used to completely cover multiple squad cars, as well as their interiors.

Everyday the pigs turn our public spaces into open air prisons. We call on all abolitionists to take the defunding and disarming of the pigs into their own hands.

Be bold! Sabotage is fun!