On Wednesday at dawn an attack took place on the gate of the apartment building of Kabouris Theodoros, president of the local New Democracy of Serres. Slogans were written and motor oil was thrown at the gate and at the cars of the other residents. The event was reported in the local media. We were honoured to receive comments from the local KKE and SYRIZA. The act is dedicated to Thanos Chatziangelou. Keep strong comrade, soul and body in the struggle. Strength to the archer, to Dimitris Hatzivassiliadis, to Alfredo Cospito and to all the imprisoned comrades around the world. We do not forget the behavior of the uniformed stains towards Thanos. Everything continues, it’s all a road, not a step back. 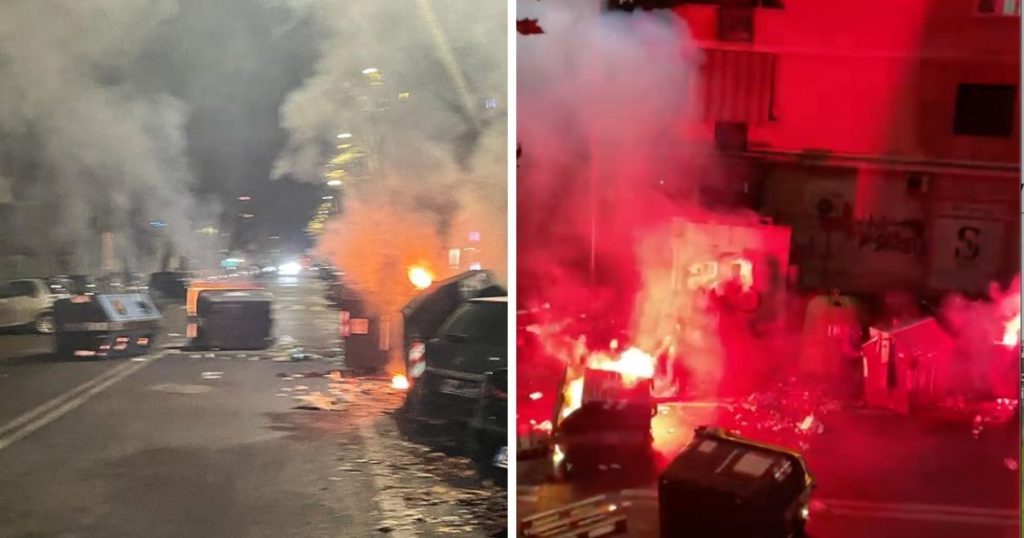 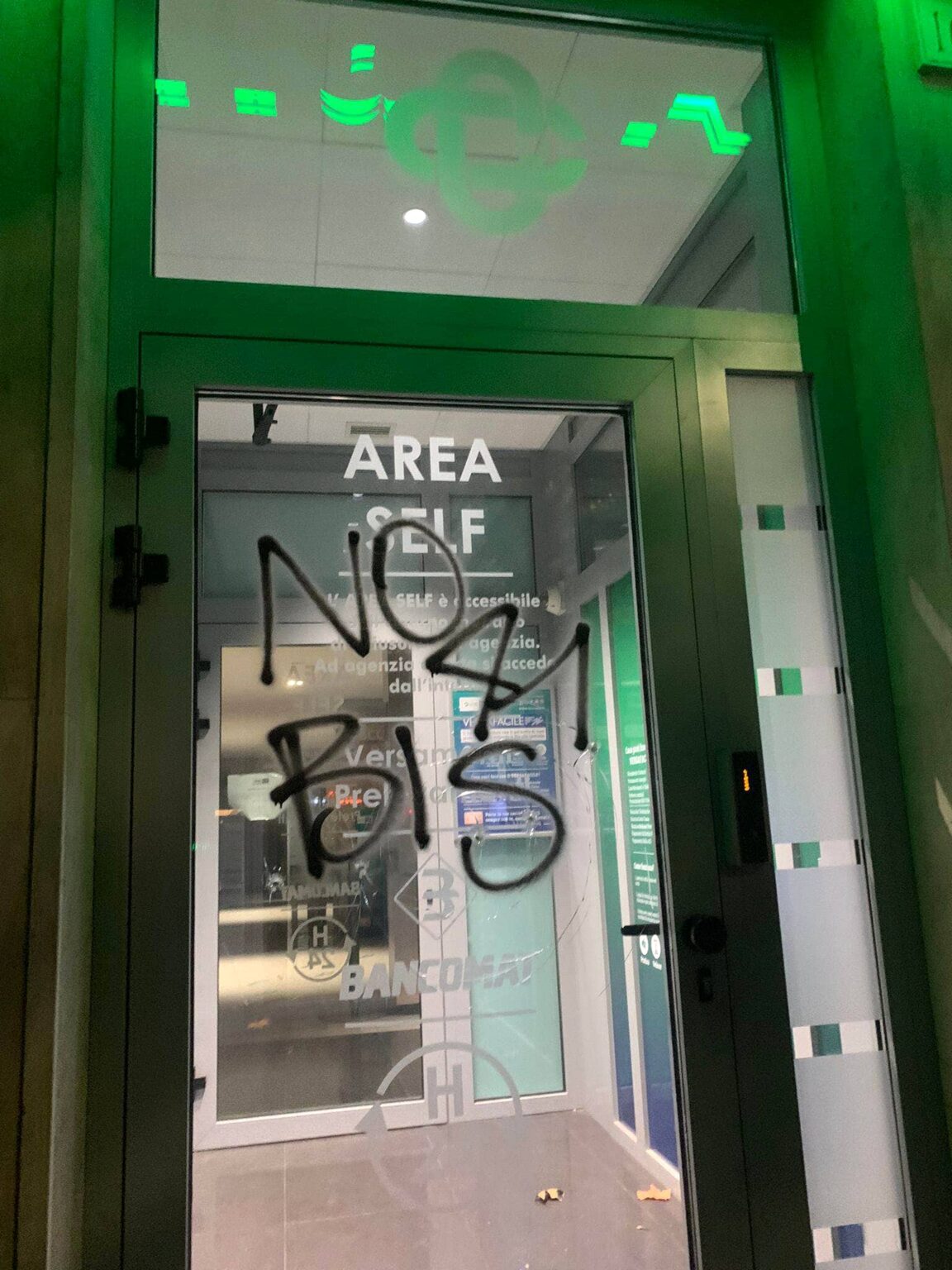 We learn from the media that on December 18, in Rome’s Appio Latino neighborhood, shortly after midnight unknown persons damaged a number of banking facilities, including a post office-specifically, at least one postamat was set on fire and some glass windows were smashed-by spilling into the street and also setting fire to some garbage cans. According to media reports, the damage and fires occurred, very quickly, between Macedonia Street, Via Latina and Roselle Square. Murals were left on some of the buildings: “Alfredo libero,” “No 41 bis,” in reference to Alfredo Cospito, an imprisoned anarchist on an all-out hunger strike against the 41 bis prison regime (in which he has been imprisoned since May 5) and the hostile life sentence (which is likely to be the final sentence for the comrade at the end of the Scripta Manent trial, which has reached its last trial hearings).

The repressive forces, which arrived shortly after the events, were unable to stop anyone as the unknown persons had already left the area.

[Images are taken from regime media].

We are not friends of big speeches and sometimes there is therefore not too much to write. The Denn’s Biomarkt on Antonplatz in Berlin is certainly not the largest, nor the most beautiful of its kind. Nevertheless, we took the trouble – from Tuesday to Wednesday the 19.10. – to leave a few stones and spray “You are the crisis” on the entrance.

Denn’s Biomarkt we can populistically call the extended arm of the Greens in the neighborhood. Those who have long had to turn over every penny can’t afford to buy supposedly fair-trade, socially acceptable and carbon-neutral lavender-apple smoothies. Denn’s oh-so-worldly appeal makes us lose our appetite. Good for the wallet, bad for the soul. We have remedied the crisis mood for a short moment.

Greetings to the “Everything just stolen!” people (translated below), who have taken heart and have quite obviously had a good bite, and also to the everyday criminals, who naturally take their lives in their own hands, bypassing the state and capital! 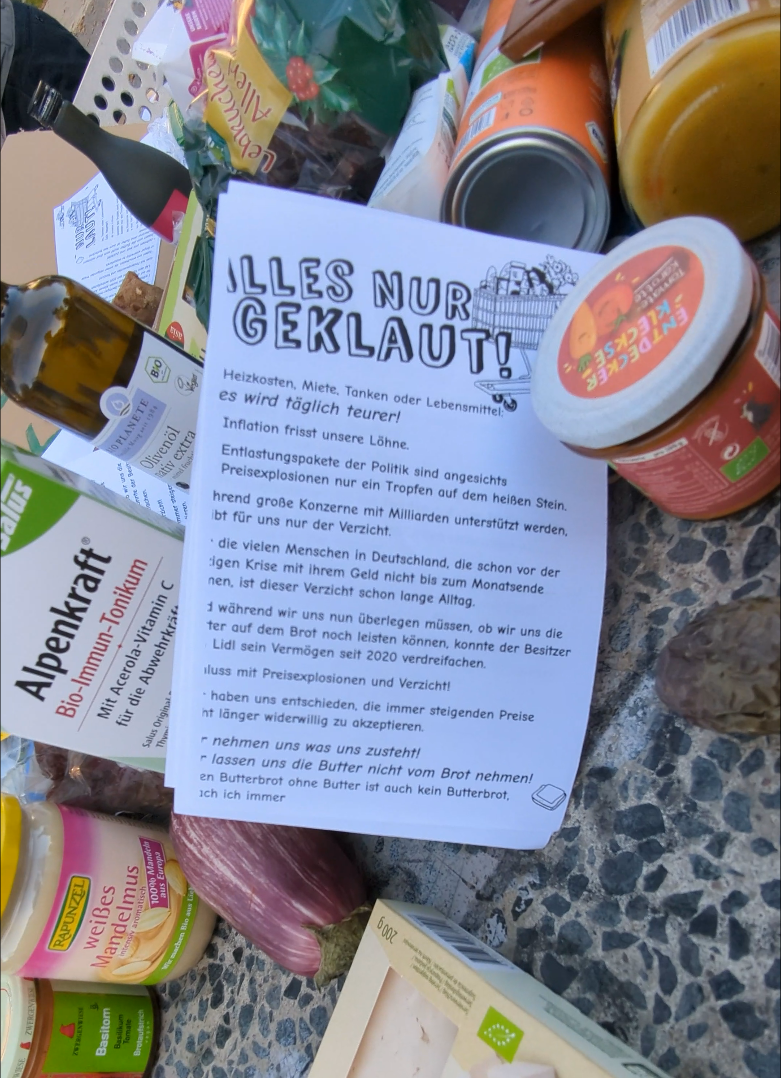 we were today at denns plundering, have captured and distributed goodies worth 900Euro. Others have done it before us, hopefully more will do it after us. Here’s to the hot autumn of looting!

Everything only stolen! Whether heating costs, rent, gasoline or food: Everything becomes daily more expensive! The inflation eats our wages. The relief packages of the policy are in view of the price explosions only a drop on the hot stone. While large corporations are being supported with billions, the only option for us is to do without. For the many people in Germany who were already struggling to make ends meet before the current crisis, this sacrifice has long been part of their everyday lives. And while we now have to consider whether we can still afford the butter on our bread, the owner of Lidl has been able to triple his fortune since 2020. No more price explosions and doing without! We have decided to no longer grudgingly accept the ever-increasing prices. We take what is rightfully ours! We don’t let them take the butter off our bread (lol) – a sandwich without butter is no sandwich, I always say. 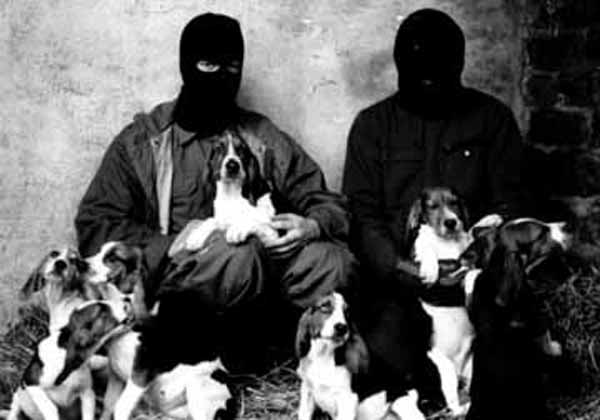 Over the past few weeks we have received second hand reports about unreported actions against the laboratory puppy mill MBR Acres. Here are the words of anonymous people who passed on information. Unfortunately as the reports do not come from the activists there is no solid way of knowing the exact details of the actions or of the intentions behind those actions.

“I have heard that one of the MBR workers’ house got spray painted. Surely he is not very happy with the company who don’t really care about his security. The press has been writing a lot of lies about it and the police is investigating”

“Someone has sent a 2 sec video of Russell’s house being spray painted, maybe because people have worked out that they are still operating in Thrapston. I can’t work out what it said on the wall but when I went to visit it had already been cleaned”.

“We have received information from a very trusted source that a heavy police presence was at MBR Beagle tonight due to ‘Animal Rights Militia’ contacting Cambridgeshire Police and informing them of a viable device left on site.

Police still in attendance doing fingertips search and a helicopter had been deployed to scene but has since gone according to a few activists in the local area.”

WARNING! To state-agents..we collect intelligence too!

As a free-lance photographer in a careless rush to make a fast buck, you snap images that expose people’s identity, when it’s totally possible to shoot from a different angle which doesn’t show the face. This inconsiderate funding of your lifestyle has earned you a reminder to take this as a warning!

There have been many demonstrations recently, and Simon Chapman has been out making a name for himself (and some money) at most of them. Because of this, we paid him a visit…

We sprayed ‘Simon Chapman Photo-Cop’ on his house and ‘is Big Brov’ on his door. We hoped to attack his car too (Grey Ford Focus registration DE53 XZS) but it wasn’t there when we visited him.

Chapman is the Bristol Branch Secretary of the National Union of
Journalists. He has sold images of people to both the Daily Telegraph and the Mirror; and regularly sells his photographs to the Bristol Post (who have a long history of publishing police photographs; encouraging people to snitch, and report on the whereabouts of ‘persons of interest’). Chapman’s images often show people in incriminating situations. In his thirst for fame and money, he is effectively an evidence gatherer for the state, and is profiting from putting people at risk.

The history of direct action in Bristol has always been of interest to
the mainstream press (especially the Bristol Post). Now, more than
ever, self-styled experts, activists and freelancers create careers for themselves out of interpreting the actions of others. Acts of rebellion are passively packaged as click-bait, used as cultural capital in some edgy form of gentrification, and utilised by the state as evidence and leverage in the tired (but sadly enduring) discourse around “good” and “bad” forms of action/anarchism.

Like many others, Simon Chapman has made a career out of gaining credentials within activist circles; before using this as a way to launch a career with the main stream press.

We don’t have a photo of Chapman; but he is medium height, no facial hair, always wearing neutral clothes. Always has a ridiculous telephoto lens on his camera and often a large rucksack with a waterproof cover.

He nearly always wears a bucket style sun hat, and walking boots, and behaves very confidently while strutting around taking photos. Maybe now he will look around him a bit more; rather than always pointing the attention on to others.

Times have changed since the Bristol riots of 2011 and the surveillance state is more pervasive…. Though not omniscient. This action is to remind anyone who assists the police in their investigations by documenting moments of rebellion, that we have eyes too… and we are watching you.

Chapman is one individual in a city filled with self-styled media
experts, “alternative” journalists and media outlets… but remember, surveillance works both ways, and we are on to you.

We refuse to be mediated or mis-represented. We speak only for
ourselves.

See you on the streets!