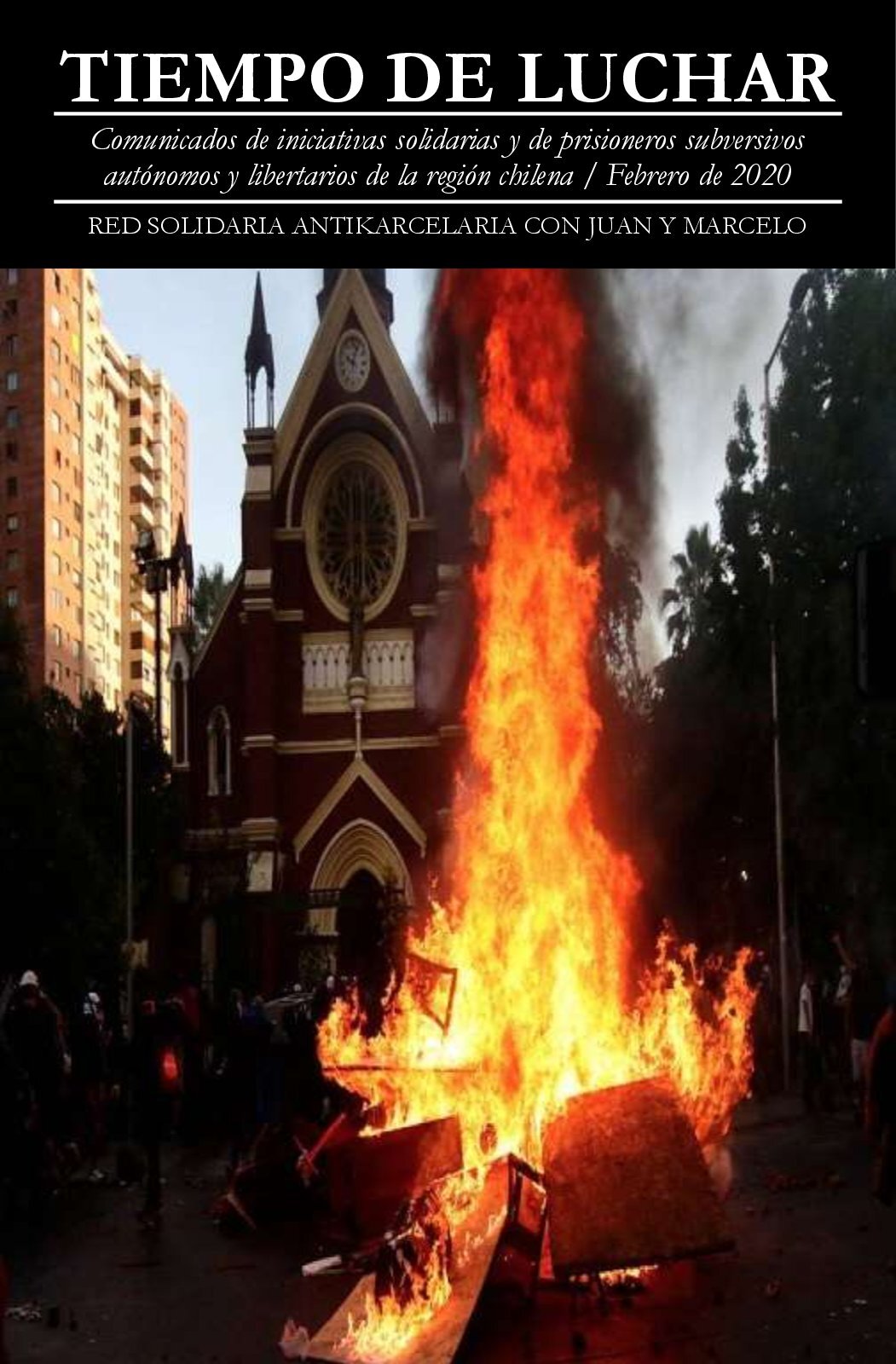 Editorial (Translated from Spanish into English, publication only in Spanish)

“Prisons are today, and always been, punishment weapons that the establishment uses against anyone putting at risk private property. The exploiters use repressive systems for this matter in order to carry on their privileges and keeping the order and laws they shelter on, their filthy status quo. (…) It is time to take action, on an everyday basis, along with our related comrades, for the destruction of the prison society and any social attempt to amend this filthy death system. Solidarity must never be an empty slogan, but an everyday action against the establishment and a constant support to our brothers and sisters kidnapped during this war to death”.
-Mauricio Morales, praxis anarchist.

Solidarity and action goes hand in hand, they are not empty words lost somewhere, and we forge a relationship with our imprisoned comrades on an everyday basis, a political and caring relationship that goes beyond the prison walls. This relationship is seen when we make actual support gestures, and when we feed into our rallying cry. These different gestures we make with numerous comrades inevitably crack the control systems that the establishment keeps against the prisoners. It is a milimetric crack, but it is crucial. It is known that the control and punishment imposed: the disastrous dynamics between some of the prisoners, coward wardens that lose their minds with a little bit of authority and forget that outside the prison they walk as we do. Anyway, it is necessary to keep on multiplying gestures, we are talking about visits, letters, assignments, propaganda, and action. We must get involved in the action for the anti-prison fight, know the resistance history of many of the fighters that here as well as in all around the globe, had left, and keep leaving their experiences as life lessons, since it is known that who are against the dominant social order and against the ruling class that allows this to carry on, and act against all of this: the prison, the underground movement, even death can knock our doors. This is why we must keep in mind the state maneuvers that may fall on the ones that decide to rebel against it.

Now, this publication is a minimal gesture of support for all our imprisoned comrades. We have been working on this for a long time, after the demonstration we organized in Villa Francia in last August, we point this out because the content is bound with that gathering. The chance we had to be with Juan Aliste Vega and Marcelo Villarroel Sepúlveda, and the supportiveness we gave, had a as a result words written by them, in addition with some more sent by subversive imprisoned comrades, words and ideas that we wish to spread for the sake of feedback and action, individual as much as collective in times where prison has been the result for thousands of people.

A few months went by and it is necessary to remember the events that were happening at the time, struggle wise, in particular the one where middle and high-school students were at the barricades and attacking the cops with Molotov cocktails. There has been years and years of street fights and the political leaders at the time wanted to eradicate it at all costs, passing more laws, slandering on press media, just to name a few repressive methods, and how the young combative answered? Fighting fire with more fire.

A new rise on the public transport fees would be the motivation for the combative middle and high-school students to make public calls to avoid paying the subway tickets in Santiago, the infamous Santiago subway. This way people went in masses to avoid paying the tickets, being in the first place triggered by videos on all social media made by Instituto Nacional students’ making chants and playing radical music. Afterwards, that would spread to the masses that would divert in heavy damage to public property and showdown against subway guards and the cops. The pivotal point was on October 18th (coincidentally, 12 years from the so called Caso Security), where a crowd of people went out to the streets in the downtown and on every town, and started a spontaneous riot, with no directions, no leaders nor political parties. This moment demanded us being present on the streets with our rallying cry, our guts and heart on the conflict that would take unexpected turns.

From October 18th the streets were packed with people living the chaos in the downtown and everywhere else, so an emergency state and a curfew were declared, with the military forces in the streets, which didn’t calm the waters: the riots, the showdowns, the fire, the street cuts, the sabotages and vandalism got worse. Then, little by little we were finding out about the strong state response by their repressive organisms: death and rape of people, violent beating, torture and mutilation, imprisonment as control and punishment against rebelling people that were caught or that were found guilty afterwards by State agents. On the other hand, the euphoria and joy of being part of one of the historic moments that we always dreamt of, the revolt was not a slogan read somewhere anymore, we were fighting back the establishment along with a society tired of years and years of exploiting and misery. The revolt had started, it stayed and the anarchists, and our imprisoned comrades that has been fighting from a long time had a big part on all of it.

Now, at the end of February, the most violent part of the revolt had been diminishing to rest and rise again in specific moments all over the country, yet, it is crucial to mention that the streets has not been cut loose, people is still fighting, we are still doing it downtown and in every small town, each with a different point of view, some are fighting for establishment reforms, others, that whish a better life, apart from institutionalism, where anti-prison and anti-establishment utopias are being created little by little in each territory along with people and comrades, always looking forward, because we know that still there is a lot to get back from the enemy and because we truly wish to see our imprisoned comrades out on the streets, for them and for everyone else is still a lot left to do.

“March is coming”, that chant is repeated over and over again, and we must be prepared.

“You don’t know how the powers that be would tremble if we carried the violence against us to their door. If their privileges and lives were threatened, they would negotiate to avoid losing it all. The armed action would reveal the world the cowardice and hypocrisy of the oligarchy. The armed action would show the world the enemy’s true face. We would prove that it is possible to fight against it with their own sources and defeat them on their own game. The fear of the people would become insurrection when they found out that it is possible for us to beat them.”
-Ulrike Meinhof, RAF urban guerrilla.

We end this editorial pointing out that in this edition you will find the statemets made by “Red Solidaria”, the written words that were sent by the imprisoned comrades for the demonstration that took place in last August along with greeting sent for the same. Lastly, the texts written by Juan Aliste Vega and Marcelo Villarroel Sepúlveda regarding the revolt context and political imprisonment that it lived nowadays all over the country.

¡LONG LIVE THE REVOLT!
¡FOR AN ANTI-CAPITALIST AUTONOMOUS ACTION MULTIPLICATION!
¡RELEASE JUAN, MARCELO, AND EVERYONE IMPRISONED DURING SOCIAL WAR!
¡AS LONG AS MISERY EXISTS, REBELION WILL BE!