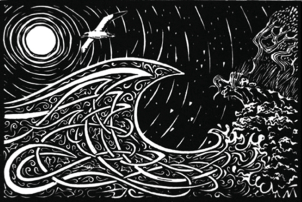 If there is one open secret that has been going around in the world of children for decades, it is undoubtedly that which the fox confided to the Little Prince: «It is only in the heart that one can see rightly; what is essential is invisible to the eye». Would it be mere coincidence that the heart that pronounced this phrase in the middle of the last century, while not wearing the military livery, slipped easily into the journalist’s rags, for example to denounce the «republican crimes» of Spain of 1936-37 in the major nationalist newspapers? Or that as a fervent admirer of a Marshal reconciling the Frrrrench people under his rule after the debacle was rewarded with a nomination to the provisional committee of the Rassemblement pour la Révolution nationale [National Popular Rally, collaborationist under the Vichy regime] (1941)? As some pointed out later on another occasion, the most important thing in matters of official trifles is not so much to be able to refuse them as to not deserve them. On 31st October [2020], therefore, his pathetic heirs of Master 2 Security and Defence of the University of Assas were not wrong in adopting the name of Saint-Exupéry for their sixteenth promotion, recognizing in him the alliance between «literary genius and military spirit: honour, respect, courage and love of country.». Apparently, it seems the essential can sometimes leap to the eyes all the same! But let’s move on.

At this unquestionably particular time, what could an organ that despises the spirit of the barracks as much as State terrorism discern on the other hand? At first glance, between a deadly pandemic justifying authoritarian measures of all kinds, strengthening of the technological prostheses from work to school right to all relationships, the environment becoming increasingly devastated and artificial under the incessant blows of industry, or the absence of utopian horizons – that «unrealized but not unrealizable dream» as was defined by someone famous «athoricidal projectile thrown upon the pavement of the civilized» — it is true that times seem more favourable to the clouds of domination than to the social tempest. And that there would almost be enough to lose the memory of the time before, as if covid-19 had swept it all away.

Forgotten the brief start of an insurrection in Greece a little more than ten years ago, which had at the same time marked a possible in the heart of old Europe and shown the limits of lack of revolutionary perspectives that go beyond a simple riotous extension? Forgotten the possibilities opened up three years later by the various of uprisings on the other side of the Mediterranean, drowned in the blood of civil wars, crushed under the military boot or suffocated by religious and democratic sirens? Forgotten the uprising in Chile of barely a year ago, so powerful in its acts combining expropriations and massive destructions in the face of the military, but retreating at the last moment so as not to cross the threshold of the irreparable unknown, in a territory still traumatized by a ferocious past? Forgotten these recent North-American riots against the police, for once capable of overcoming the old divisions by starting to question one of the pillars of domination, without however succeeding in undermining all the others, if not through the enraged action of few minorities? Forgotten even the famous movement of the yellow vests, undoubtedly deeply linked to the demand for a better State, while being able, in the very name of its reformist postulate to regain a spontaneous taste for riot in the face of the one in place, or that of sabotage against various power structures through self-organization in diffuse small groups? Nonetheless a promising example of identification of the enemy’s structures, which did not content itself with toll booths, tax centres or radars but had, for example, also pushed exploration to the relay antennas, to the homes of elected officials or the electrical systems of industrial and commercial areas. END_OF_DOCUMENT_TOKEN_TO_BE_REPLACED