On Saturday, September 25, 2021 at the Medialuna* of the Valiant of NOS, located next to Route 5 South, in the commune of San Bernardo, some attendees found a suspicious device under the bleachers, calling GOPE personnel who quickly went to the site.

Specialized police personnel found two incendiary devices composed of plastic bottles filled with fuel, plus cables, batteries and a watch. After hours of work and the evacuation of 300 attendees, the GOPE managed to deactivate the device, indicating in the press that it was destined to be activated at 14:00hrs or in 14 hours (press versions are contradictory in this regard).

Pamphlets signed by “Grupo de Respuesta Animal” were found in the sector, rejecting the rodeo as an anthropocentric and speciesist expression.

“…We choose to live on the edge of the abyss and not the ways of docile people who crawl around begging for power” (Excerpt from Célula Nihilista del Ocaso del Fuego. Argentina).

Via Enough Is Enough, Translated by Riot Turtle.

Three years have passed since my arrest, and after a series of legal attempts to hold court hearings in person, the courts refused this possibility without me being able to present a legitimate defense, so that I will only find myself in front of a screen to watch the absurd spectacle of judges, state prosecuters and police officers exercising their power to imprison me for as many years as possible.

“Not to trust, nothing to expect from the judiciary”

Staying upright in any possible scenario, recognizing oneself as a prisoner of war, remains the path to follow.

Emphasizing that there is nothing to explain or acknowledge to the state for this journey, taking up the struggle against this world of permanent misery.

I am not the only one, nor will we be the only ones here; many brothers and sisters have been here for quite some time, reflecting the continuity of the tireless struggle for total liberation. And so we have joined together in practice and discourse in the face of the various anti-prison issues, targeting the real enemies and establishing a bond of insurgent fraternity.

A warm hug to all who have shown active solidarity with the prisoners in various territories.

A complicit salute to our subversive and anarchist brothers and sisters for their mutual support.

May the subversive practice strengthen and spread the volumes of complicity!!!

Freedom for the subversive, anarchist prisoners, and prisoners of the revolt and the Mapuche!!!

Cancellation of the changes of Decree 321!!!

Destroy the prison society and its supporters!!!

Territory dominated by the Chilean state

On Friday, September 10, 2021, about five anonymous individuals boarded the Transantiago bus on Vicuña Mackenna Avenue, in front of the San Joaquín campus of the Catholic University, to get off the driver and passengers.

Quickly the anonymous would have poured petrol and set fire to the public transport vehicle, at the same time that they threw leaflets demanding the freedom of the prisoners of the revolt and remembering one of those killed by the repression during the revolt.

No one was injured or arrested.

Since then much water has passed under the bridge, many have been the deaths and many prisons have seen the passing of comrades who have proudly confronted Power from the place where it has been their lot to be, nevertheless the ideas that translate into affinity and action have endured and are those that today motivate us anarchists and subversives of the territory dominated by the Chilean State to continue the war from this confinement and in the streets, always bearing in mind the necessary harmony between prisoners and supportive and complicit environments that walk from the confrontation with the normality of the existing. END_OF_DOCUMENT_TOKEN_TO_BE_REPLACED 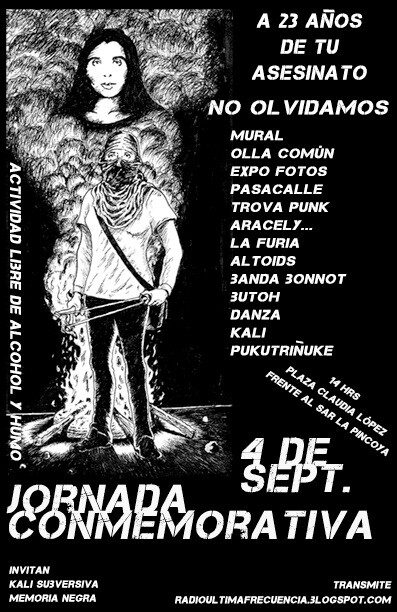 On Sunday, August 1, 2021, a group of hooded men armed with shotguns managed to intercept the Transantiago bus, route 108 at Departamental and Galo Gonzalez.

After making the passengers and the driver get off the bus, the group set fire to the bus throwing leaflets stating: “Freedom to all political prisoners, anarchists, Mapuche, subversives and of the revolt, without conditions! Luisa Toledo and Pablo Marchant present!”

On May 11, at 9:00 p.m., unknown persons arrive on a bicycle at Pérez Valenzuela and Antonio Bellet, in the Providencia district, where a building of the SODEXO food concessionaire is located.

After leaving a suspicious package, they quickly escape, and a few minutes later there is a loud explosion that destroys part of the windows of the building.

GOPE, Labocar and the South Prosecutor’s Office arrived in the area to investigate the attack, which left no injuries, only material damage.

Since March 22 different subversive and anarchist prisoners have been on hunger strike to demand the repeal of Legislative Decree 321, the freedom of comrade Marcelo Villarroel and the prisoners of the revolt. In this scenario of anti-prison struggle we point out:

1. During the night of Black May 11 and prior to the curfew we detonated an explosive device in front of the SODEXO company for its responsibility in the daily misery that tortures thousands of prisoners in the prisons of the Chilean democracy. SODEXO is in charge of the concession of the prisons of Antofagasta, Iquique, La Serena, Rancagua and El Manzano. The joint work between Gendarmeria, the Chilean State-Police and private capital make up a triad that evidences the lucrative business of the prison-companies, annihilating the dignity of the prison population according to their economic interests and the social order of the rich and powerful.

2. We affectionately salute the comrades who carried out a hunger strike for 50 days, demonstrating that the combative prison is a tool of resistance to prison submission, while spreading the germ of action in the streets. It is vital to maintain a rhythm of combat that accompanies the processes of intra-prison mobilization, understanding that the struggle for the liberation of our prisoners and their conditions of confinement is a long and relentless one.

3. In a context of police and military control the attack is possible, it only depends on our will and will to fight. In this sense, the discourse that all revolutionary action is assembly only affects the fighting spirit of those who organize and stand up with dignity against the enemy, devaluing a history of struggle that advances with hundreds of comrades imprisoned, wounded and dead. If we do not believe in our capacities the construction of a new world will only be a chimera, we call to organize the attack in all territories and realities.

4. In this Black May we remember our comrade Mauricio Morales who 12 years ago died in action trying to attack the Gendarmerie School. The memory is kept burning in the streets and in the multiform action, only those who forget die.

WE CELEBRATE THE OFFENSIVE AND SABOTAGE IN THE WALLMAPU!
WE SALUTE THE REVOLT IN THE COLOMBIAN TERRITORY!
TO RETAKE THE STREETS TO CRUSH THE ENEMY AND REFORMISM!
THIS WEEKEND TO VOTE IS TO VALIDATE THE PACT OF THE POLITICAL CLASS AND TO
TO BARGAIN ON THE SPILLED BLOOD!

By anarchy we will win, in autonomy we will live.

NOTE: The 15 years old anarkopunk comrade Nicolás Neira dies after being hit by a tear gas bomb fired by the ESMAD police during the May 1st clashes in Colombia.