“The state calls its own violence law, but that of the individual crime.”

On a wet boxing day, 26th Dec, we held a noise demo outside HMP Bristol in solidarity with all prisoners and to show recently kidnapped Gopal some love & rage! Gopal was sentenced to 18 months for violent disorder following the Bristol kill the bill riot in March 2021. You can find Gopal’s details along with other prisoners who welcome letters and solidarity here: https://bristolabc.org/prisoners/

We made noise, left our greetings on the walls and a banner at the entrance.
Fuck christmas but fuck christmas in a cage even more.

ALL SCREWS ARE BASTARDS!
KILL THE BILL!
FOR GOPAN, RYAN, KTB PRISONERS, TOBY, ALFREDO!
FIRE TO THE PRISONS! 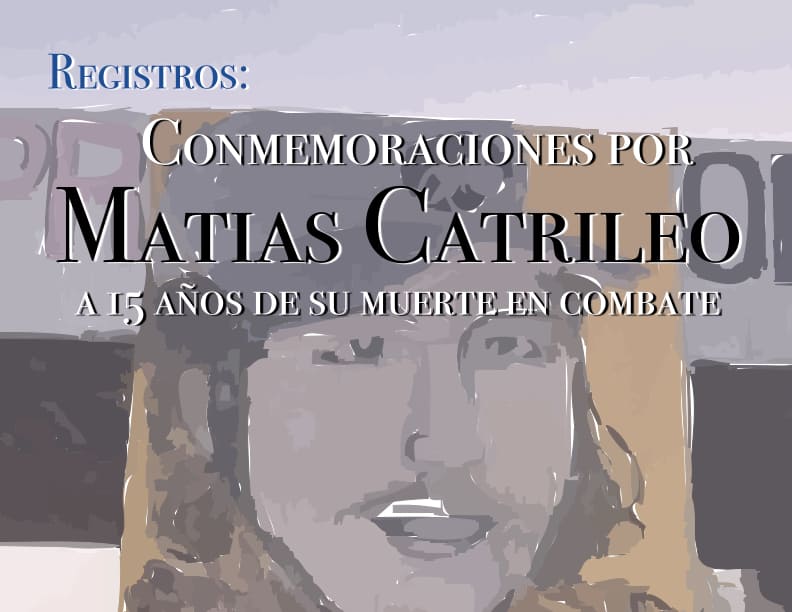 On Tuesday, January 3, 15 years were commemorated since the murder of the weichafe Matías Catrileo in 2008 at the hands of the carabinero Walter Ramírez while armed confrontations were taking place in a territorial recovery in the former Santa Margarita estate (owned by the Luchsinger families).

For this new day of memory and combat, there was the deployment of banners and propaganda in different parts of the local territory; a concentration in Alameda at the height of Cerro Huelen where barricades were set up and confrontations with Molotov;

After armed confrontations in Villa Francia, a policewoman was shot in her helmet and had to be taken to the hospital. In the following days, an investigation was carried out at the site to search for those responsible. Also a RED bus was stopped and completely burned by hooded comrades. END_OF_DOCUMENT_TOKEN_TO_BE_REPLACED 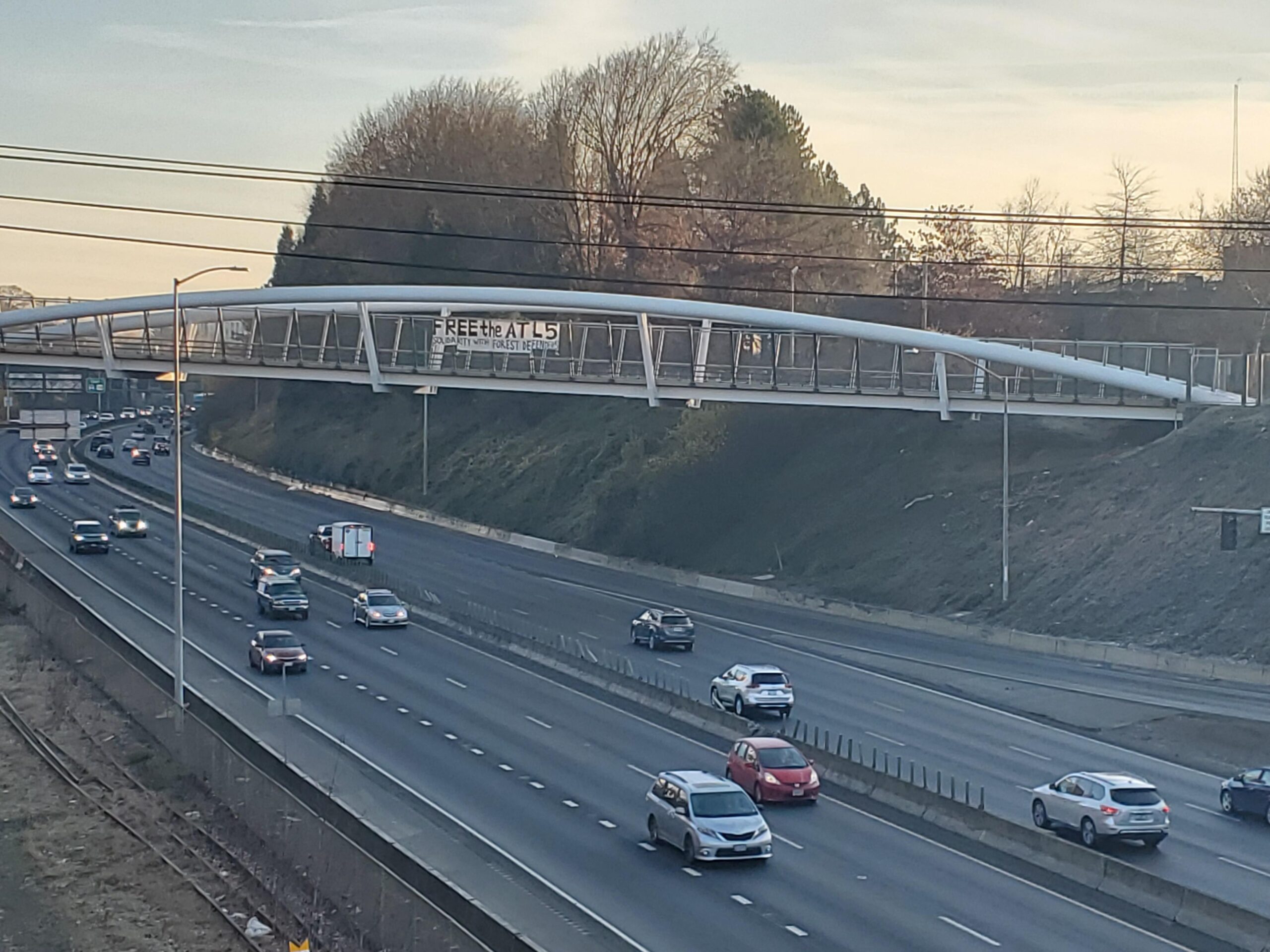 5 people have been arrested and charged with Domestic Terrorism for their alleged connection to Defend The Atlanta Forest movement in USA. These arrests were notoriously brutal, included the deployment of chemical weapons repeatedly, and placed unfounded charges against them in an effort to torture, terrorize, and brutalize.

We want every prison to burn, every prisoner to be free, and the violence of the state to be destroyed. We must stand in unflinching solidarity with all those arrested, and be committed to absolute resistance to any current or future state investigation, no matter what it requires of us. Anything less is unconscionable. 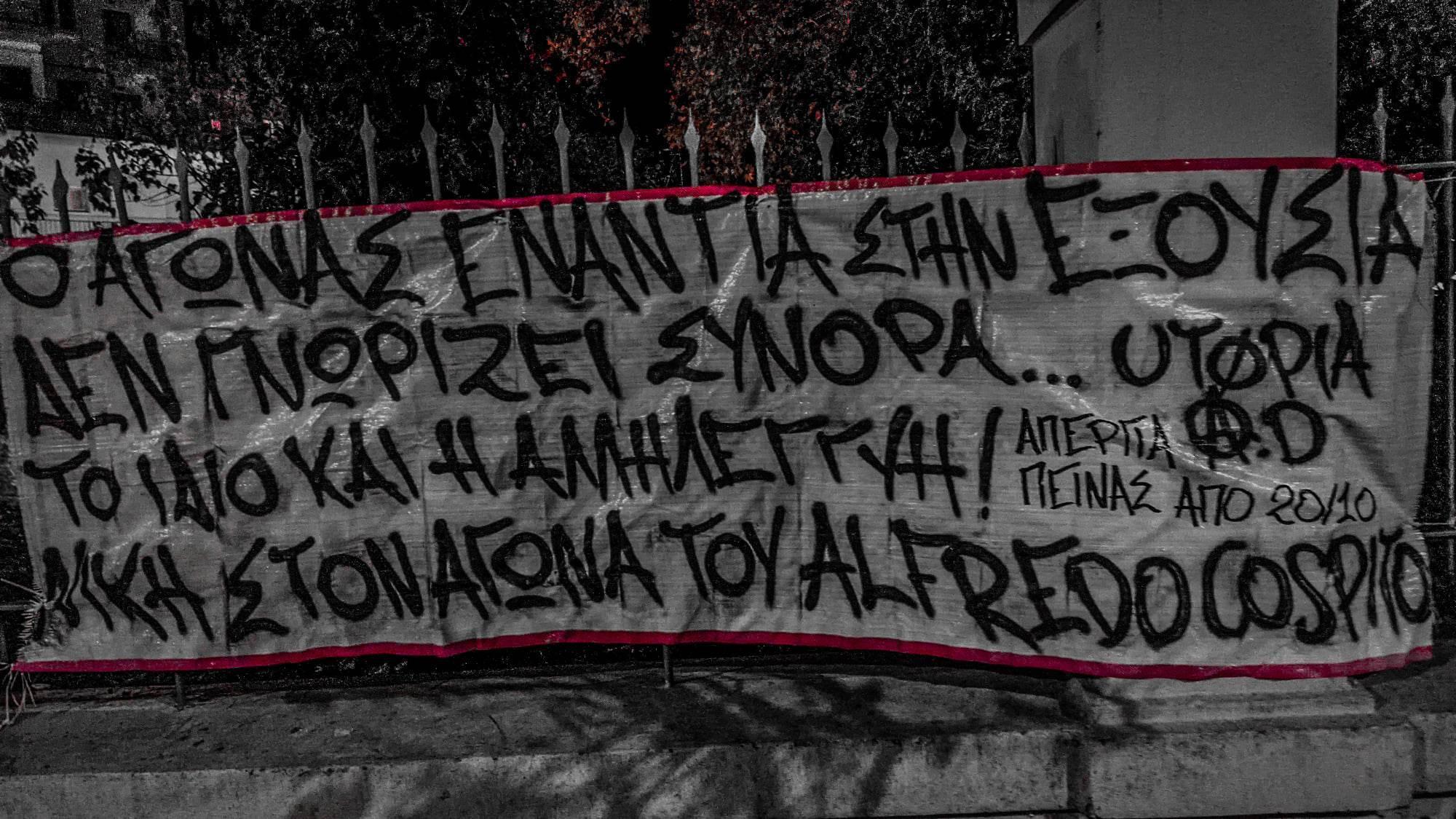 On December 4 we held a rally with hundreds of leaflets, banners and slogans in the central points of Komotini and in the central square in solidarity with the Italian anarcho-nihilist Alfredo Cospito, who is on hunger strike since October 20, against the special regime of imprisonment 41bis in which he is being held in revenge by the Italian state because of his unrepentant attitude.

Victory in the Struggle of Alfredo Cospito 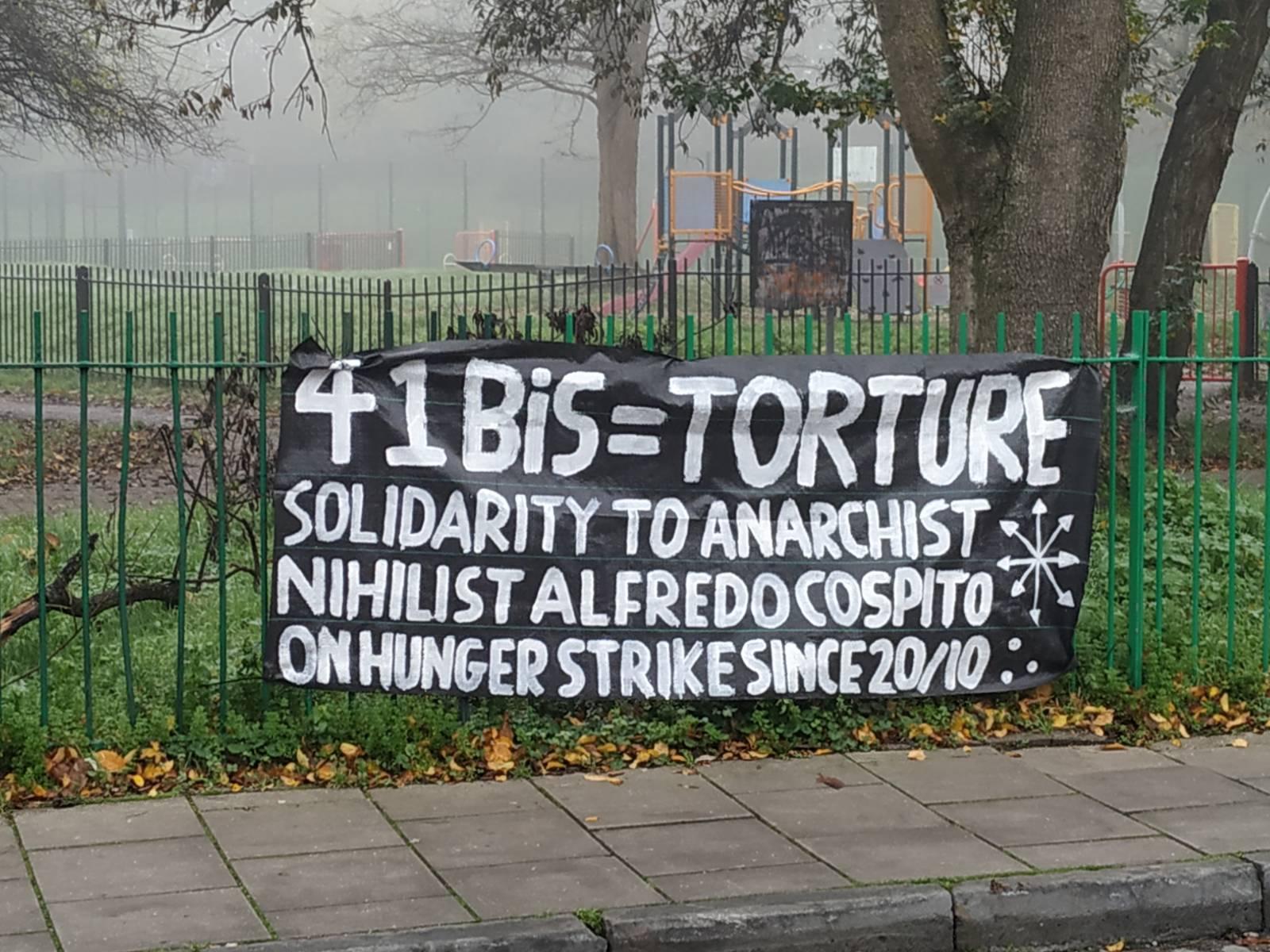 On a typical bleak winter night on this grey prison island, during a typical poster sticking session, we hung a banner, in the Easton area, as a minimal sign of solidarity with our anarchist nihilist comrade Alfredo Cospito, who is on hunger strike since 20th October & is in conflict with the Italian fascist state after it put him in the torturous isolation prison system of 41 bis.

Our hearts are still with anarchist comrade Toby Shone who is also on partial hunger strike in solidarity with Alfredo.

Some shadows in the mist 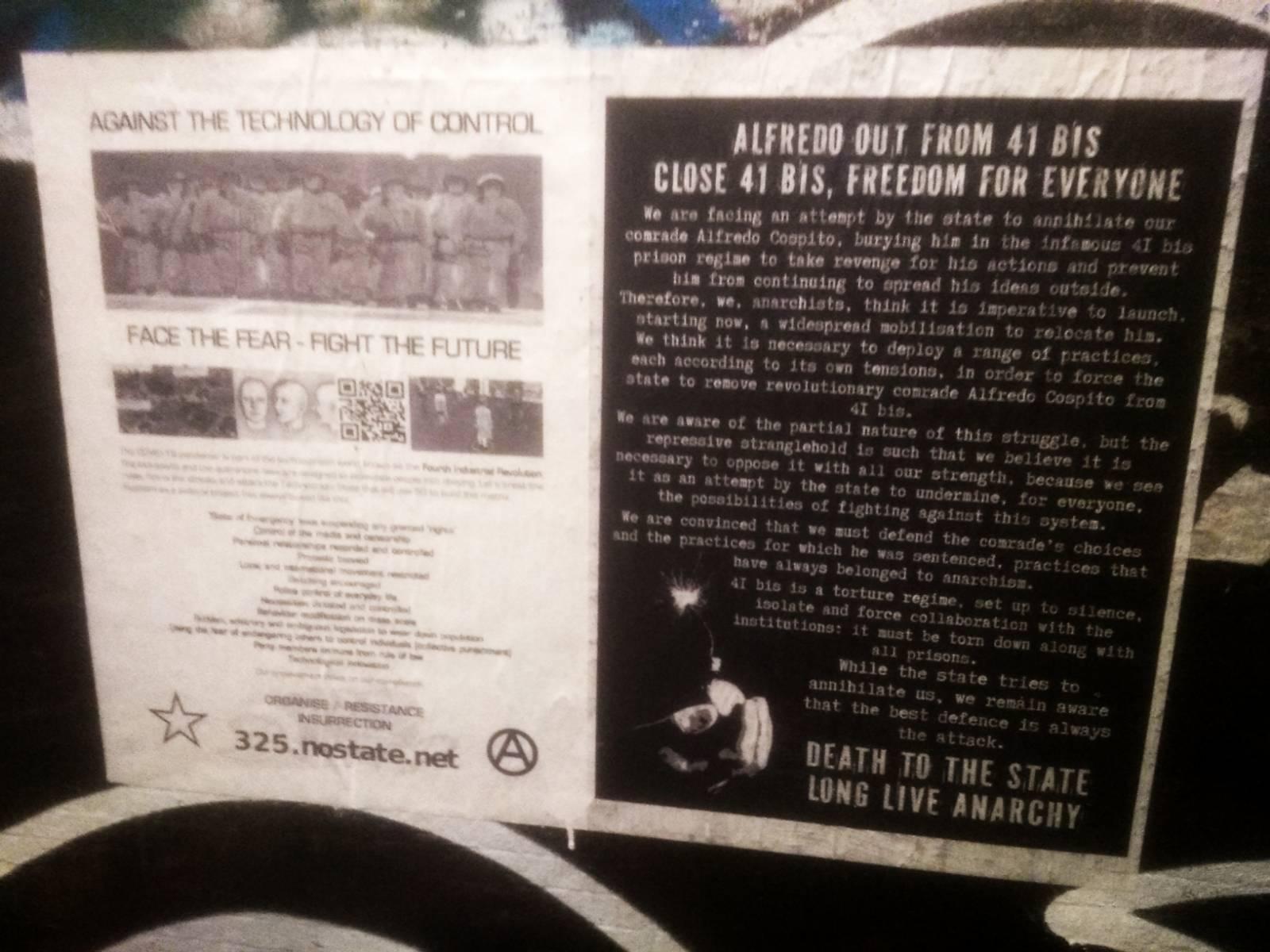 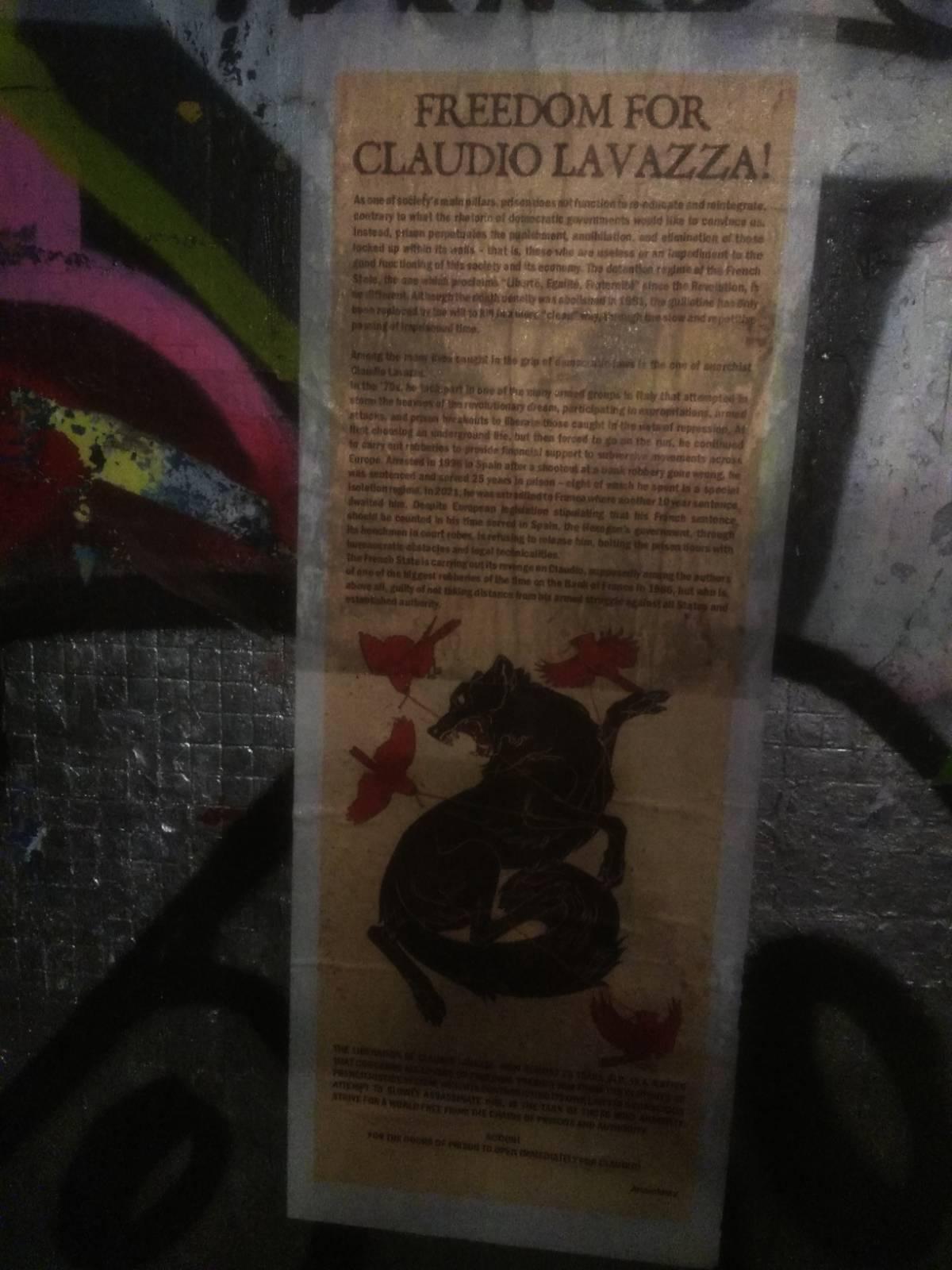 Occupied the crane of the construction site of La Scala Theatre in solidarity with anarchists Alfredo Cospito, Juan Sorroche and Ivan Alocco on hunger strike against 41 bis and life imprisonment without possibility of parole (Milan, Italy, November 6, 2022)

Since the early hours of this morning, two comrades have been occupying the crane at the construction site of La Scala Theatre in Milan in solidarity with the hunger strike by Alfredo, Juan and Ivan against 41 bis prison regime and life imprisonment without possibility of parole.

We will hold a gathering as of now in support of the action in Piazza della Scala until the comrades come down. We invite you to join us in large numbers! The day is still long! 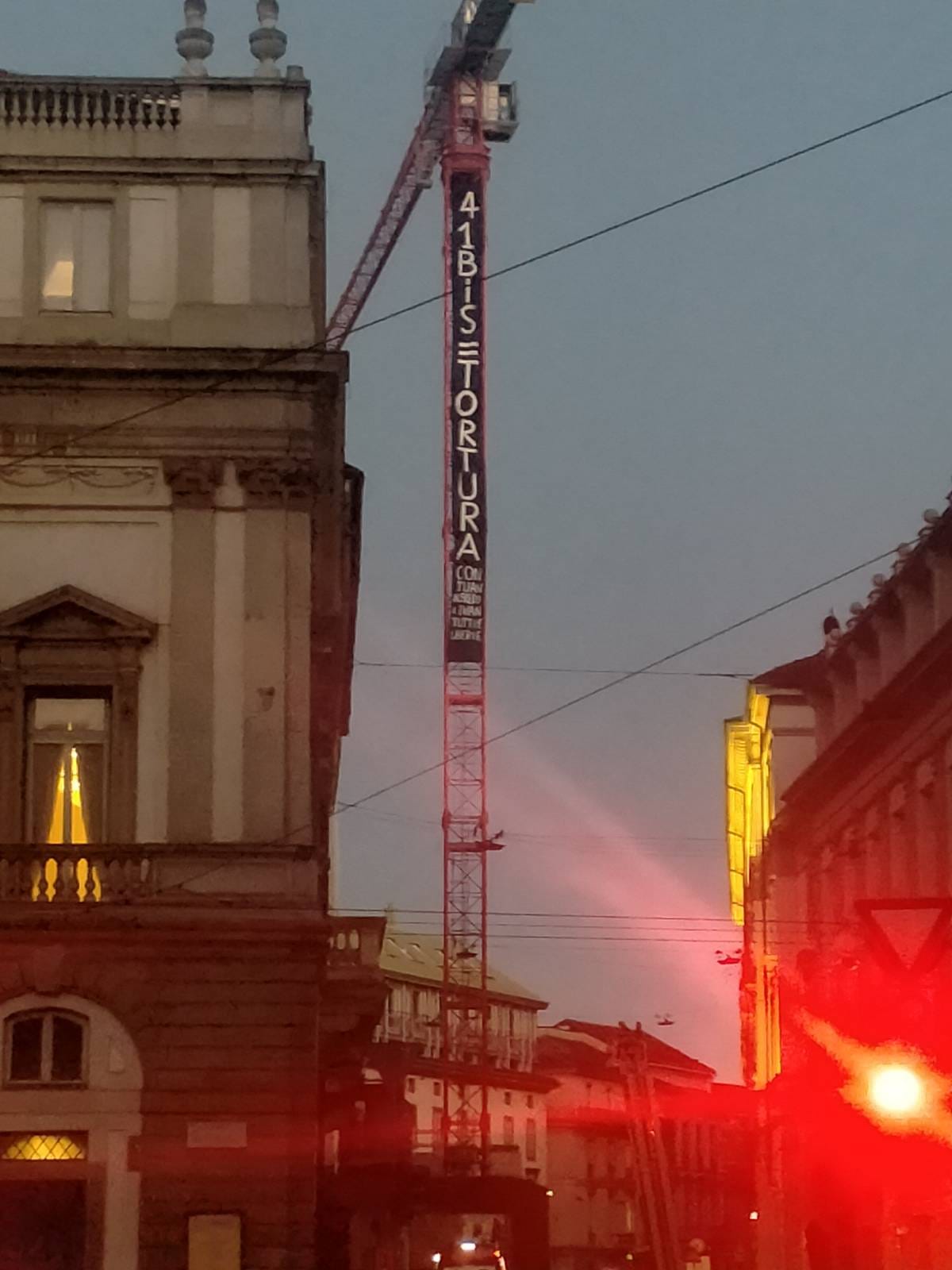 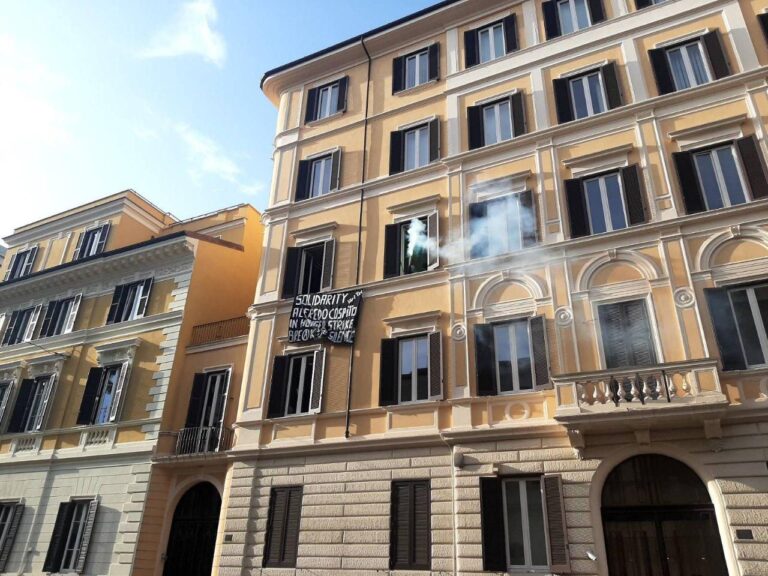 Today 25/10/2022 we occupied the Italian headquarters of Amnesty International in Rome, in solidarity with the anarchist prisoner Alfredo Cospito, who is on hunger strike since six days in the Sassari prison against the 41 bis and the life imprisonment without possibility of parole. The 41 bis is a form of prisoner annihilation, for the first time used against the anarchist movement. Alfredo was transferred to 41 bis, after more than ten years of imprisonment in high security sections, with the declared aim of shutting his mouth and silencing his contribution to the revolutionary debate.
We denounce what happened during the 20 October hearing at the Sassari surveillance court, as an exemplification of the brutality of the 41 bis Cayenne: during the hearing, which the judge imposed behind closed doors and with the comrade connected by videoconference, Alfredo attempted to read an articulate defence brief through which he expounded the reasons for the beginning of his struggle. The judge interrupted the comrade, preventing him from concluding his speech in the only – and perhaps last – opportunity to communicate with the rest of the world since he was transferred to 41 bis, by simply cutting off the audio. His contribution has been sealed like everything else from the black hole of 41 bis. If the lawyers decided to disclose it, they could face penal consequences.
An unprecedented decision that clearly shows how the state is afraid of anarchist ideas and the practices that these ideas inspire. This is unacceptable. We want to read our comrade’s words immediately!
We have nothing to ask of humanitarian associations such as the one against which this morning’s initiative is directed: we know that their alternating current grievances only denounce the misdeeds of some exotic regime, preferably an opponent of western imperialism. We are not asking you to say anything about it… we just wanted to spit in your face your false conscience!

Close the 41 bis! Break the silence!
In solidarity with Alfredo on hunger strike! 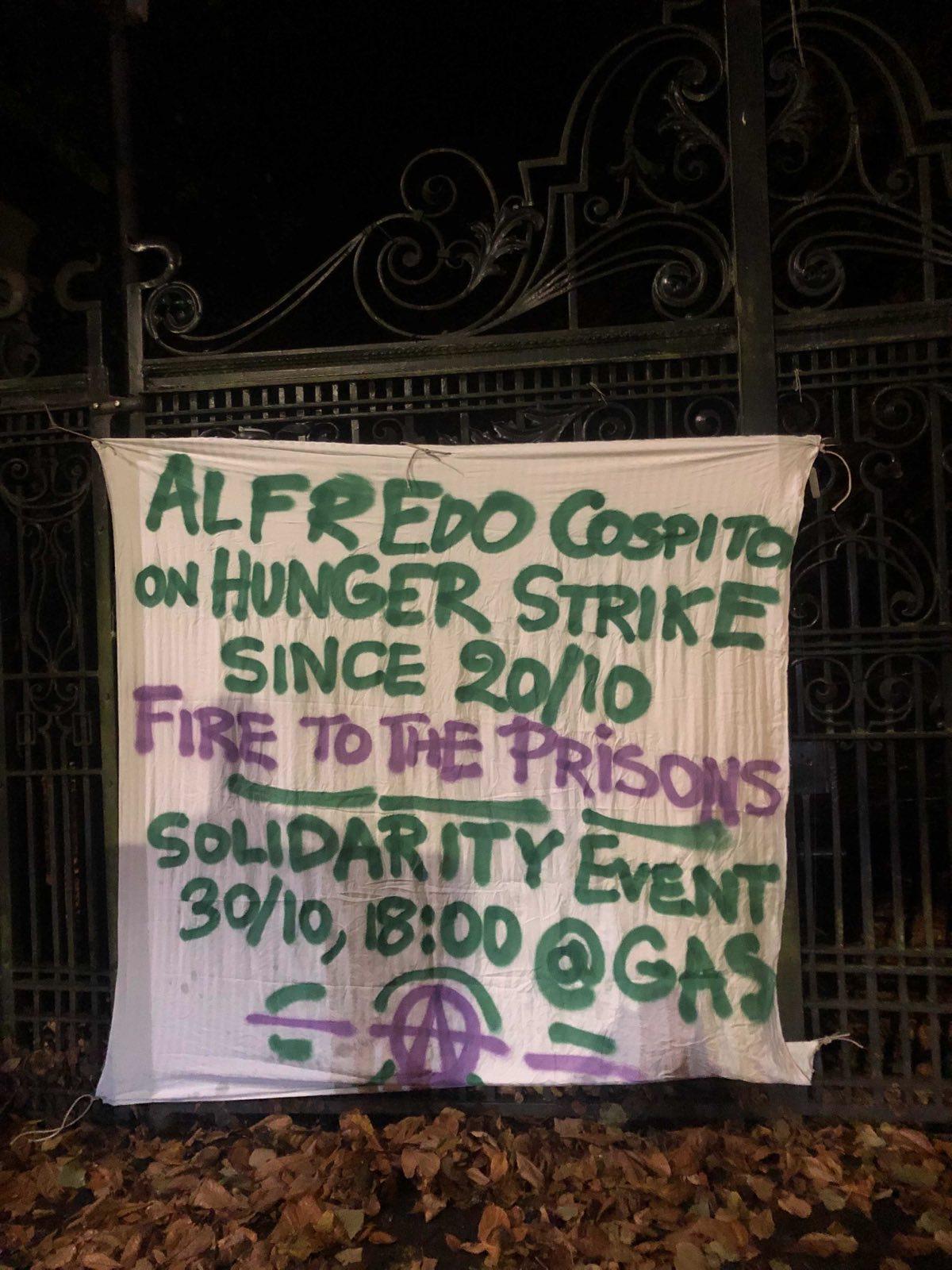 Banner dropped at Queen’s Park in Glasgow and poster for solidarity event, 30/10, 18:00 at Glasgow Autonomous Space. 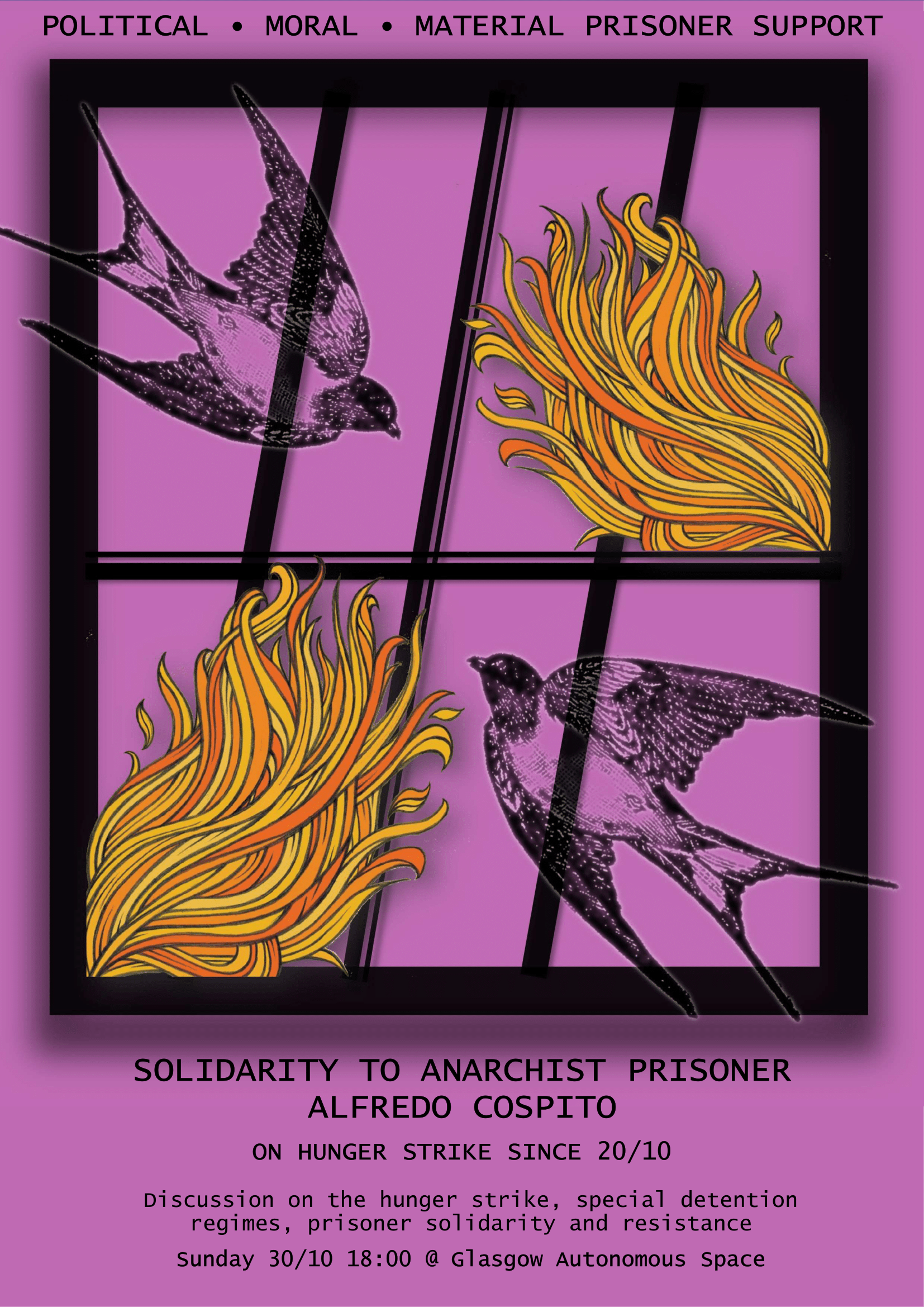 Banners have been hung in an abandoned building of Genova with the words:

Alfredo Cospito
out of 41 bis
For anarchy

Via & Translated by La Nemesi

At 4:30 a.m. on Sunday, September 4, 2022, on the eve of the beginning of an election day that sought to elucidate which would be the governing constitution, anonymous hands decided to stay away from the ballot boxes and close to the sabotage.

A thunderous noise shook the commune of Hualqui, in the Bio Bio Region near the city of Concepción. Specifically on the route that joins Hualqui with Quilacoya.

A Transelec high-voltage tower was completely knocked down, damaging those next to it. Despite the destruction, the electricity supply was not affected in the area.

With explosive charges, the persons unknown took the tower off its axis, four dynamite charges were installed, exploding only 3. At dawn, the police personnel managed to go to the sector and noticed not only the damage to the electrical infrastructure, but also a banner left by those responsible for the attack.

A black banner with white letters claimed responsibility for the action, signing it as “Resistencia Urbana Autónoma” (Autonomous Urban Resistance).

In the early hours, the government decided to lower the profile of the events, with the Undersecretary of the Interior Manuel Monsalve himself describing it as a “small incident” due to the fact that third parties had cut a tension cable. Shortly afterwards, he had to retract his statement in view of the evidence of the facts.

Personnel from the PDI-BIPE* traveled from Santiago to carry out the necessary investigations. END_OF_DOCUMENT_TOKEN_TO_BE_REPLACED