This transfer is an attack on a comrade anarchist who never lowered his head: who, after his arrest and in the trial that followed, claimed head-on to have shot in the legs the CEO of Ansaldo Nucleare, Engineer Adinolfi, one of the top nuclear executives in Europe. In recent years, Alfredo has been a thorn in the side for investigators because of his constant contribution to the revolutionary movement, a contribution they would now like to silence. END_OF_DOCUMENT_TOKEN_TO_BE_REPLACED 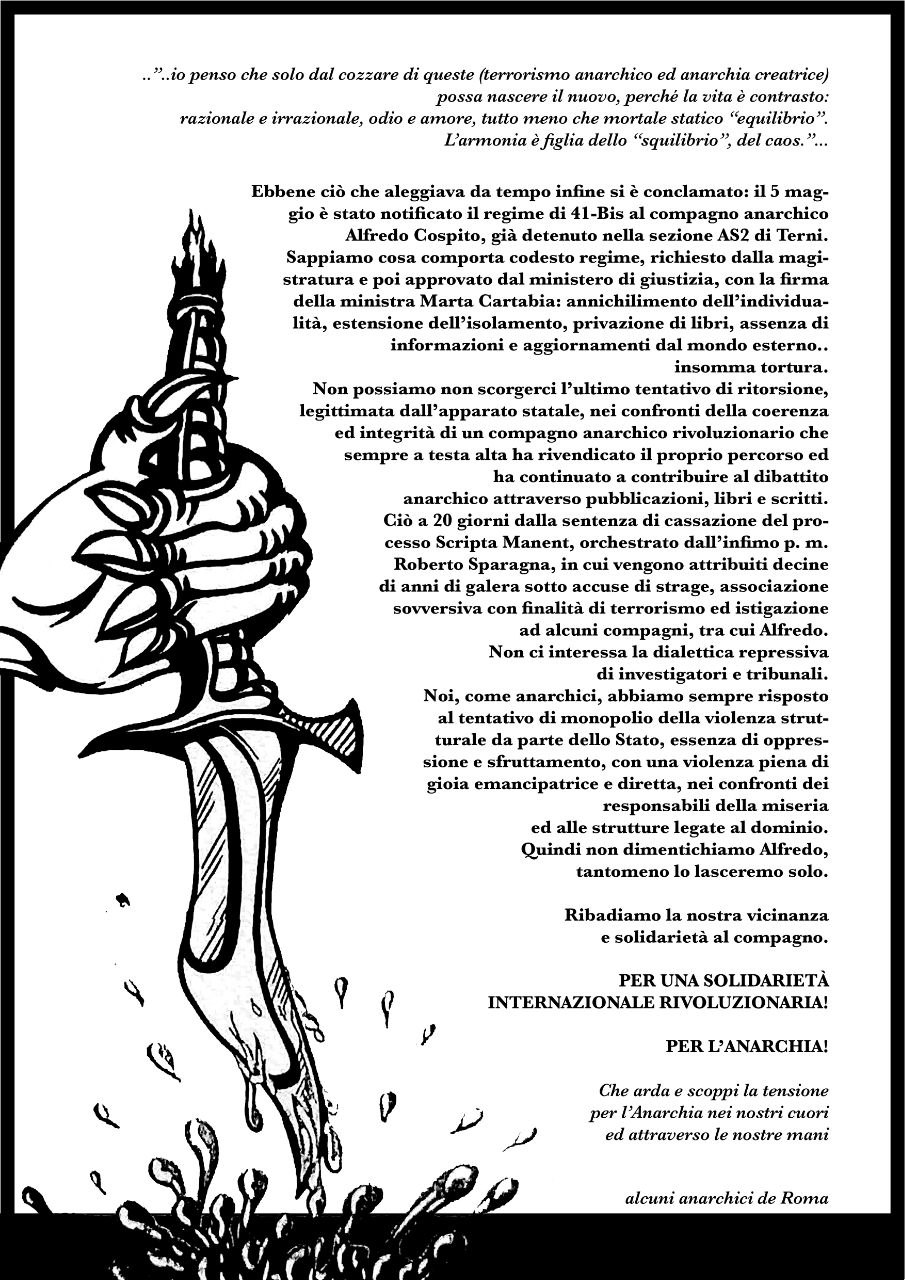 “…I think that the new can only come from their collision (of anarchist terrorism and creative anarchy), because life is contrast: rational and irrational, hate and love, everything but the mortal, static “balance”. Harmony is the daughter of “imbalance”, of chaos. “*

Well, what has been hovering for a while has finally manifested itself: on May 5, the anarchist comrade Alfredo Cospito, already detained in the AS2 section [High Security 2; Att.Nt) of the Terni prison, received the notification of the application of the 41 bis against him.
This detention regime, requested by the judges and approved by the Ministry of Justice, with the signature of the Minister Marta Cartabia, as we know, involves: the annihilation of the individual, an extension of the isolation, the deprivation of books, the lack of information and news from the outside world… in short, torture. END_OF_DOCUMENT_TOKEN_TO_BE_REPLACED

19 years in prison without evidence

In April, 2021 the anarchist Vangelis Stathopoulos was sentenced by the Criminal Court of Appeal to 19 years in prison. Our comrade has been in custody since November 2019, in the first repressive operation of New Democracy – after coming to power – regarding the imprisonment of militants through trumped up charges and blatant plots.

Vangelis Stathopoulos, when asked, provided first aid to an injured comrade. The court of appeal, presided over by Maria Giannakopoulou – the same judge who had convicted Tasos Theofilou in the first instance – sentenced him to 19 years in prison for participation in the “Revolutionary Self-Defence” organisation and for theft in an ΟΠΑΠ store (the biggest  Gambling company in Greece).

Based on what data? On the basis of the same evidence with which many militants have been imprisoned over the past years: the well-known “anonymous phone calls” of the anti-terrorist police, the anti-scientific “dna samples” of the anti-terrorist police and the “testimonies” dictated by the police. It is significant that during his arrest, the commander of the Anti-Terrorist Service, Lefteris Hardalias, told him: “We know you have nothing to do with the robbery at OΠΑΠ, but you will find the icing on the cake tomorrow.” The cherry on the cake was the police’s methodical claim that Vangelis Stathopoulos was involved in the ‘Revolutionary Self-Defense’ organization.

In a court of law, in which 3 witnesses testified they were with Vangelis in the centre of Athens at the time of the theft at the OPAP store in Cholargos. In a court, in which even the prosecution witnesses themselves testified that they did not identify Vangelis in any of the organisation’s attacks, nor in the theft. In a court, in which a biologist/technical consultant testified that this particular dna sample could be anyone’s. In the same court, our comrade was sentenced to 19 years.
END_OF_DOCUMENT_TOKEN_TO_BE_REPLACED