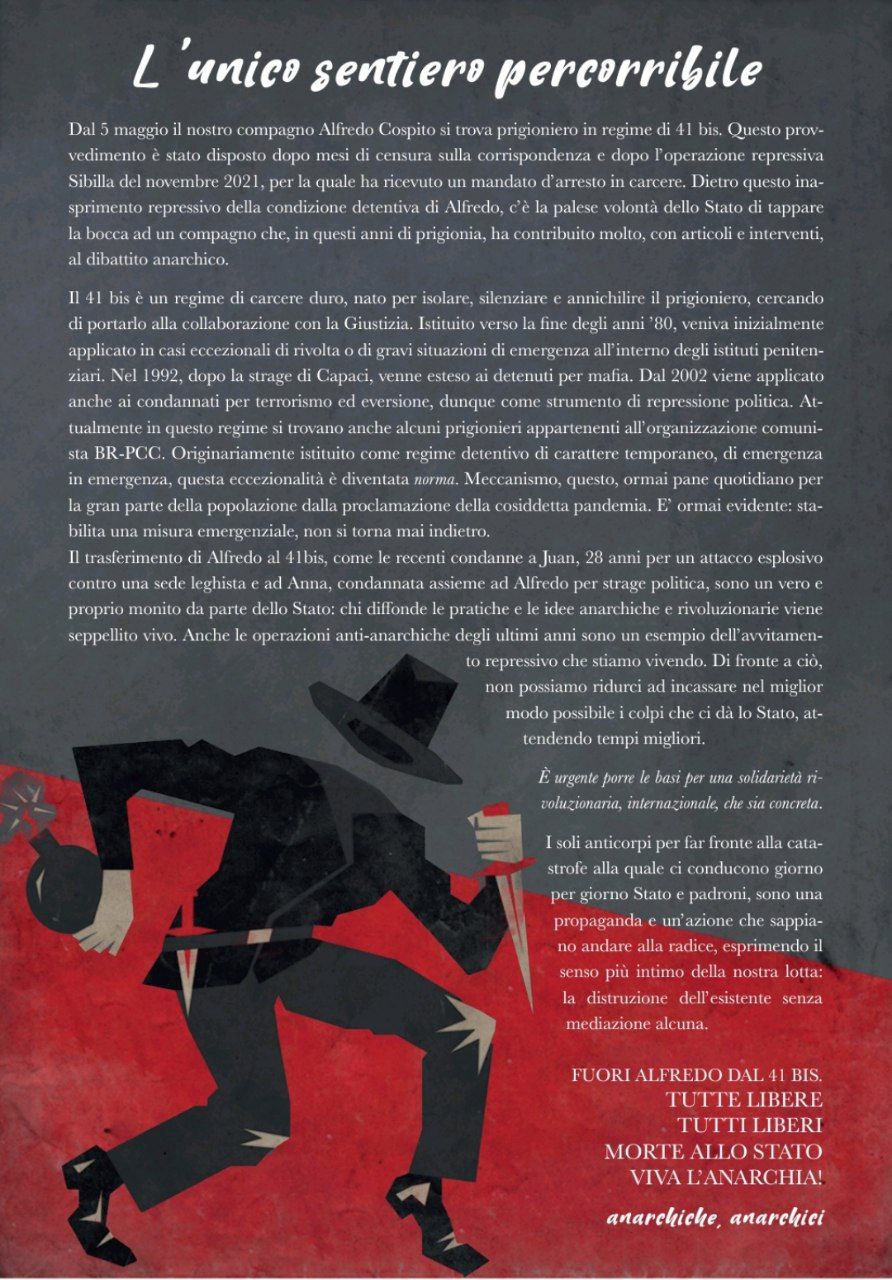 THE ONLY VIABLE PATH

Since May 5, our comrade Alfredo Cospito has been imprisoned under the 41 bis regime. This measure was ordered after months of censorship on correspondence and after the repressive operation Sibilla in November 2021, for which he received a warrant for his arrest in prison. Behind this repressive tightening of Alfredo’s prison condition is the state’s blatant desire to shut the mouth of a comrade who, during these years of imprisonment, has contributed much, through articles and interventions, to the anarchist debate.

The 41 bis is a hard prison regime, created to isolate, silence and annihilate the prisoner, trying to bring him to cooperation with Justice. Established in the late 1980s, it was initially applied in exceptional cases of riots or serious emergencies within prison institutions. In 1992, after the Capaci massacre, it was extended to Mafia convicts. Since 2002 it has also been applied to those convicted of terrorism and subversion, thus as an instrument of political repression. Also currently in this regime are some prisoners belonging to the communist BR-PCC organization. Originally established as a detention regime of a temporary nature, from emergency to emergency, this exceptionality has become the norm. This mechanism is now bread and butter for the majority of the population since the proclamation of the so-called pandemic. It is now evident: established an emergency measure, there is never a return.

Alfredo’s transfer to 41 bis, like the recent convictions of Juan, sentenced to 28 years for an explosive attack on a Lega headquarters, and Anna, convicted along with Alfredo for political massacre, are a real warning from the state: those who spread anarchist and revolutionary practices and ideas are buried alive. The anti-anarchist operations of recent years are also an example of the repressive tightening we are experiencing. In the face of this, we cannot be reduced to cashing in as best we can on the blows the state gives us, waiting for better times.

It is urgent that we lay the groundwork for a revolutionary, international solidarity that is concrete.

The only antibodies to confront the catastrophe to which the state and bosses are leading us day by day are propaganda and action that know how to go to the root, expressing the innermost meaning of our struggle: the destruction of the existent without any mediation.

OUT ALFREDO FROM 41 BIS. ALL FREE, ALL FREE
DEATH TO THE STATE, LONG LIVE ANARCHY!

END_OF_DOCUMENT_TOKEN_TO_BE_REPLACED

With blood in our eyes

Saturday July 9th, the court of Treviso sentenced our friend and comrade Juan to 28 years’ prison (plus three years’ probation, 30,000 euro in compensation to the League and 17,000 euro in court costs) because he was held responsible for the attack in Treviso of the Carroccio in August 2018. Following the recent configuration of the charge of ‘political massacre’ – which stipulates life imprisonment – for an explosive attack on the carabinieri barracks in Fossano attributed to the anarchists Anna and Alfredo, this is the highest penalty, in our memory, ever imposed in Italy for a direct action that resulted in no injuries.

Among the infinite possible examples, it can be observed that the charge of ‘political massacre’ was not even brought against the Capaci massacre, [1992, anti-mafia Judge Giovanni Falcone, his wife and three escort cops, are killed in an explosion on the motorway near Palermo, Sicily and seven other people injured] while the fascist Traini was sentenced to 12 years for shooting at immigrants, wounding six of them, (and against a PD [Democratic Party] premises…). The aggravating circumstances of ‘terrorism’ (and of ‘massacres’ with neither dead nor wounded) apply to revolutionaries in general and anarchists in particular. We could also remember what was said in so much of so-called civil society in 2018 about state racism, on immigrants segregated on ships in ports, on the declarations of Interior Minister Salvini.

We say declarations on purpose, because the actual practice of state racism, criminal agreements with Libya, etc. has never been changed by whatever government in charge. But the social consensus towards institutional racism is no mere trifle: the Captain’s [Salvini, Northern League, anti-migrant ex-deputy pm and home minister] daily tweets produced a security decree that increased the possible penalties for picketing and roadblocking to 12 years. As has been the case in Italy since 1975 – in that unique security text that began with the Reale Law and has never been completed – ‘exceptional’ regulations proliferate without any democratic outcry ever leading to the slightest repeal. While we are discovering the obvious these days: that political pressure from a multinational like Uber is behind the taxi competition rules, we pretend that the subject of ‘security’ is instead ‘technical’. As if the tightening of penalties against workers’ picketing was not commissioned by the logistics bosses. If until now no one had taken 28 years in prison for an action such as the one in Treviso, it was not because of legal limitations (with the aggravating circumstance of ‘terrorism’ applied to the individual segments that make up an action – packaging, transport, use of ‘deadly’ materials – one can get close to life imprisonment), but because of social limitations. END_OF_DOCUMENT_TOKEN_TO_BE_REPLACED

The hearing of the Scripta Manent trial took place on July 6 at the Court of Cassation (Supreme Court). The court reclassified the facts of the explosive attack to the Carabinieri students school in Fossano (Cuneo) on June 2, 2006, claimed by Rivolta Anonima Tremenda – Federazione Anarchica Informale, for which Anna and Alfredo were prosecuted, in “massacre & political” (art, 285), returning the process to the court of Torino for the punitive recalculation of the sentence. All the other sentences were confirmed, between 1 year and 9 months and 2 years and 6 months, for 11 comrades, and the acquittals for the rest of the defendants, which thus become definitive.

There will come times for more detailed reflections. What does seem evident to us is the determination of the State to break the anarchist movement and the revolutionary struggle, making even worse what happened before the Court of Assise (National Court) of Turin, with a sentence that does not seem to presume any margin for criticism. While the contradictions on which society is governed become more and more unmanageable, before the social tension takes forms that the power does not know how to manage, the State tries to give a blunt blow to the movement and a warning to those who do not desist: two or three years for those who publish a newspaper, dozens of years or even life imprisonment for those who act.

The recent decision to lock Alfredo up in 41 bis, shamelessly taken, moreover, on the eve of this sentence, is perfectly qualified in this State reprisal: the decisions have been taken, Alfredo has to stay buried, literally, in prison. His ideas, his actions, his contribution must be silenced, condemned to oblivion.

But forgetting the prisoners of the social war means forgetting the war itself: revolutionary solidarity with the anarchists Anna Beniamino and Alfredo Cospito. Death to the State and capital, long live anarchy.

The addresses of the imprisoned comrades:

In this umpteenth hearing in videoconference and after many requests, all denied, to appear and attend in person and not in absence to all the hearings of the trial that sees me charged, for the heavy and infamous accusation of massacre, I have to face the issue of videoconferencing, which enters, or to be more precise, was entering, in the infamous logic of the differentiation of the penitentiary circuits, in which the individual prisoner and accused is demonized and dehumanized by the said “considerable social dangerousness”. And I said that I was entering, because the videoconference, the trial in absentia, has been extended to all the prisoners in Italian prisons, who have been left without a real defense and with the marginalization that all this implies for all the defendants who suffer this imposition, through a liberticidal dynamic of the umpteenth emergency, this time for the Covid-19 emergency, which then became law. It is known, it is already evident and unmasked – and I am not only talking about the contradiction of this problem especially, or of one law or another – how the specific problem of the videoconference has reduced the defense to be a farce, annulling in fact the defendant within the trial.

This court will probably say that this has nothing to do with the trial taking place today.

But I believe it does, and what is more, I believe it is a fundamental issue. I am talking about the contradiction that the States possess by their own systemic nature, the fundamental problem is the disintegration and degeneration that dresses itself as emergentialism, and has the objective of breaking and directing the consolidated and ordinary legality at will, transforming it into another legality. We see it with the same dynamics of the perpetual emergency, and the specific plan of the videoconference is only an example of how the systemic authoritarianism liberticidal system expands in a capillary way. It is the exception, the emergency of today, that forges the law of tomorrow, reducing it more and more. The trials by videoconference, that is, in absentia, have been established by the continuous emergencies within the said social dangerousness, which is already the norm, such as the trial by videoconference for all the prisoners in Italian prisons. And it is not that this does not have repercussions on the real conditions of the entire trial, since it hinders the management of a real defense of the accused, creating a contradiction with what your own democratic and bourgeois law argues. END_OF_DOCUMENT_TOKEN_TO_BE_REPLACED 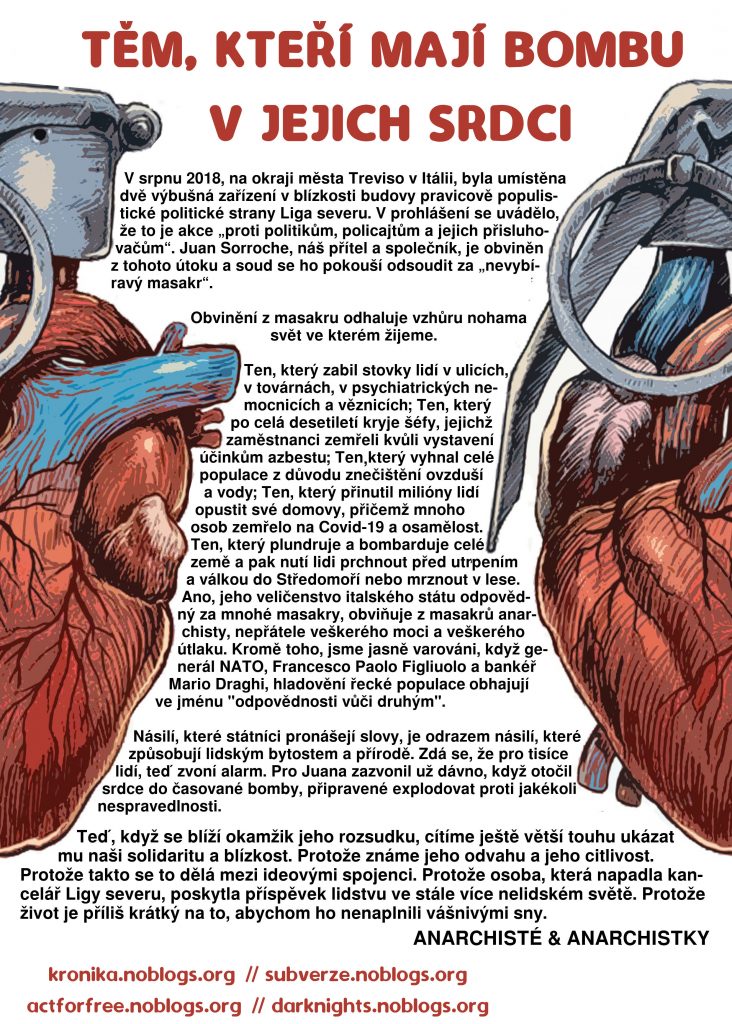 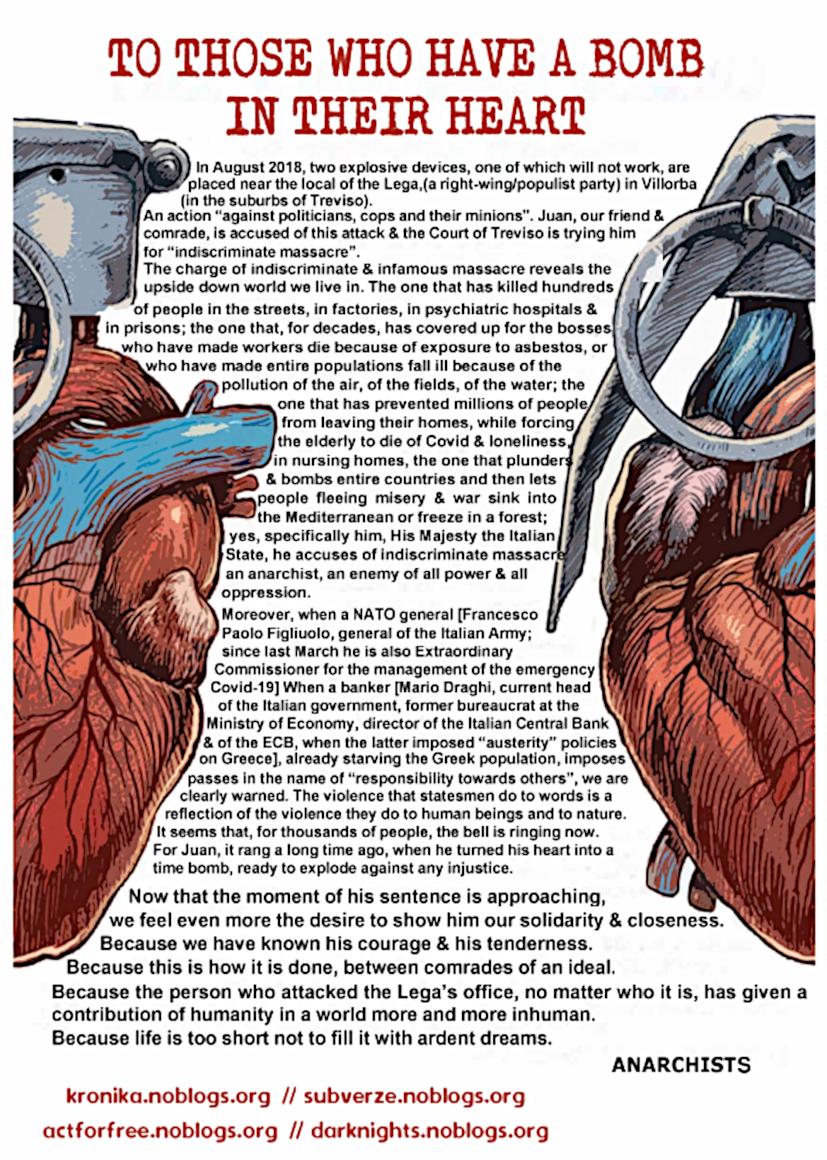 In August 2018, two explosive devices, one of which will not work, are placed near the local of the Lega, in Villorba (in the suburbs of Treviso).
An action “against politicians, cops and their minions”.
Juan, our friend and companion, is accused of this attack and the Court of Treviso is trying him for “indiscriminate massacre”

The charge of indiscriminate and infamous massacre reveals the upside down world we live in. The one that has killed hundreds of people in the streets, in factories, in psychiatric hospitals and in prisons; the one that, for decades, has covered up for the bosses who have made workers die because of exposure to asbestos, or who have made entire populations fall ill because of the pollution of the air, of the fields, of the water ; the one that has prevented millions of people from leaving their homes, while forcing the elderly to die of Covid and loneliness, in RSAs; [Residenza sanitaria assistenziale, nursing homes] the one that plunders and bombs entire countries and then lets people fleeing misery and war sink into the Mediterranean or freeze in a forest; yes, specify him, His Majesty the Italian State, he accuses of indiscriminate massacre an anarchist, an enemy of all power and all oppression

Moreover, when a NATO general [Francesco Paolo Figliuolo, general of the Italian Army; since last March he is also Extraordinary Commissioner for the management of the emergency Covid-19] When a banker [Mario Draghi, current head of the Italian government, former bureaucrat at the Ministry of Economy, director of the Italian Central Bank and of the ECB, when the latter imposed “austerity” policies on Greece], already starving the Greek population, imposes passes in the name of “responsibility towards others”, we are clearly warned.
The violence that statesmen do to words is a reflection of the violence they do to human beings and to nature.
It seems that, for thousands of people, the bell is ringing now.
For Juan, it rang a long time ago, when he turned his heart into a time bomb, ready to explode against any injustice.

Now that the moment of his sentence is approaching, we feel even more the desire to show him our solidarity and closeness.

Because we have known his courage and his tenderness.
Because this is how it is done, between companions of an ideal.
Because the person who attacked the Lega’s office, no matter who it is, has given a contribution of humanity in a world more and more inhuman.
Because life is too short not to fill it with ardent dreams.