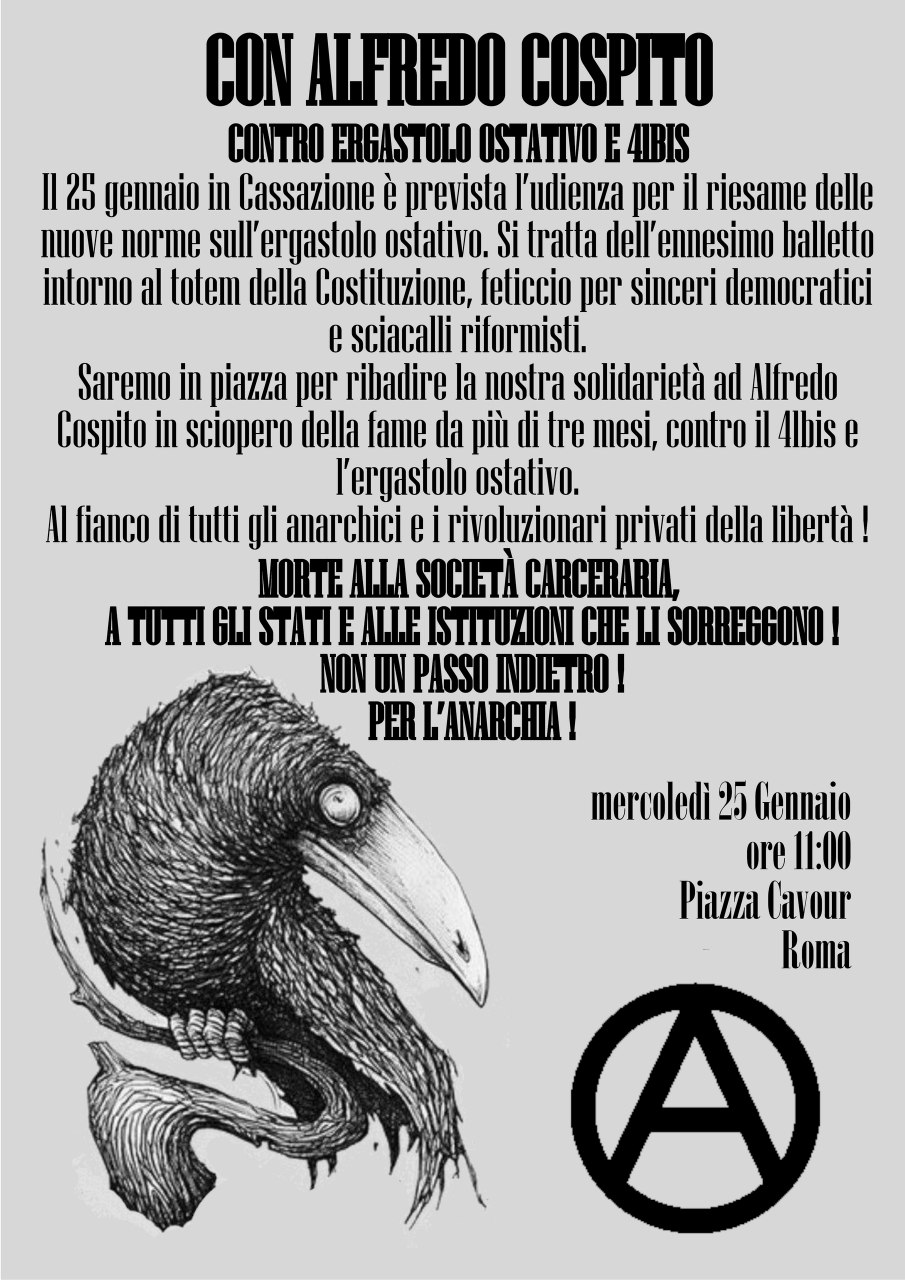 With Alfredo Cospito, against hostile life imprisonment and 41 bis: initiative to the court of cassation (Rome, January 25, 2023)

WITH ALFREDO COSPITO
AGAINST HOSTILE LIFE IMPRISONMENT AND 41 BIS

The cassation is scheduled to hold a hearing on Jan. 25 to review the new rules on hostile life imprisonment. This is yet another dance around the totem of the constitution, a fetish for sincere democrats and reformist jackals.

We will be in the square to reiterate our solidarity with Alfredo Cospito who has been on hunger strike for more than three months, against 41 bis and hostile life imprisonment.

Alongside all anarchists and revolutionaries deprived of freedom!

Death to prison society, all states and the institutions that support them!
Not one step backward!
For anarchy! 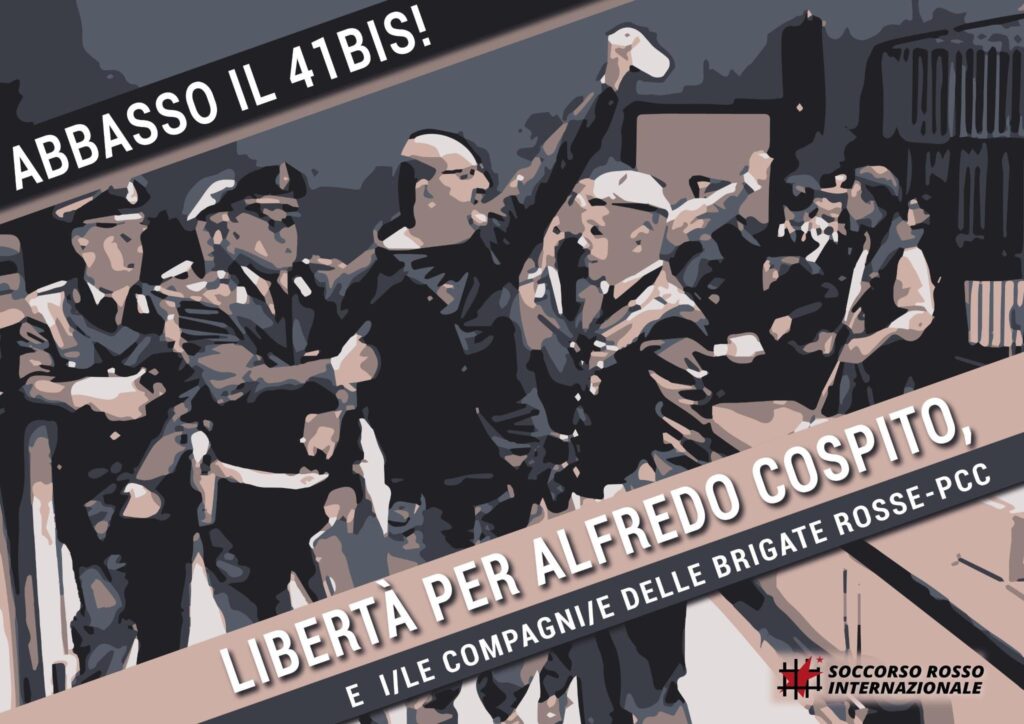 Call for an action day for Alfredo Cospito

On October 20, anarchist prisoner Alfredo Cospito began a hunger strike against the 41a prison regime, a struggle he intends to carry on until the end. Anarchist prisoners Ivan Alocco [the comrade ended the strike on Dec. 1, ed] and Anna Beniamino joined the strike, as did Juan Sorroche, who ended it after a month

The 41bis is the harshest prison regime in Europe. Created in principle to prevent members of the mafia from continuing their activities from prison, it was soon extended to revolutionary prisoners to prevent them from interacting with the outside world. Three prisoners of the Brigate Rosse-PCC, Nadia Lioce, Roberto Morandi and Marco Mezzasalma, have been subjected to this system for 17 years. The value of their resistance must be measured by the understanding that it would be enough for them to make an act of political surrender to get out of this regime.

Only by understanding these regimes of isolation as a means of pressure, as torture, to extort repentance, can we give its true meaning to the suicide of Brigate Rosse-PCC activist Diana Blefari in 2009, after four years in 41bis. Diana could no longer bear 41bis but refused to be betrayed. This choice was also a form of resistance, and it has a precedent, that of Luis Rodríguez Martínez, of the Anti-Fascist Resistance Groups of the First October (GRAPO), who committed suicide in 1983 after three years of total prison isolation. END_OF_DOCUMENT_TOKEN_TO_BE_REPLACED 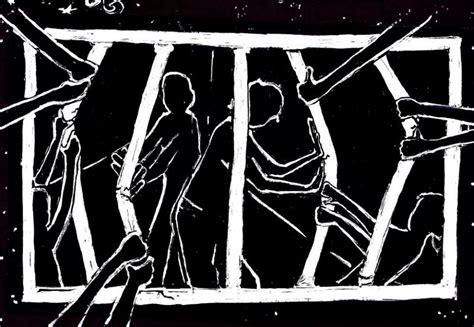 Call from Germany for a November 30 of actions in solidarity with the anarchist Alfredo Cospito, in view of the re-examination hearing on December 1 for the 41bis measure

Since 20 October, the anarchist Alfredo Cospito has been on hunger strike against his detention in total isolation and torture and against imprisonment without parole. Other detained comrades (Anna Beniamino, Ivan Alocco, Juan Sorrocho and Toby Shone) as a sign of solidarity and to give strength to Alfredo’s struggle, have also started a hunger strike.
Alfredo has been in prison uninterruptedly for ten years, spent in High Security sections until his transfer to 41 bis. The 41 bis is a prison regime of annihilation, as it is designed to cause physical and mental damage through the technique of sensory deprivation; it is a political and social death sentence, aimed at cutting off all contact with the outside world.
Our comrade was transferred to these torture chambers because, despite his imprisonment, he never stopped contributing to the international anarchist debate with articles, editorial projects and proposals.
The re-examination of the 41 bis measure against Alfredo is set for 1 December. This hearing will be very important because it will have to pronounce on the legitimacy of the previous Justice Minister Marta Cartabia’s decision to apply the 41 bis prison regime against our comrade.
Alfredo was convicted, along with Anna Beniamino and other anarchists, in the mega trial Scripta Manent, a trial aimed at criminalising anarchist ideas and hostile practices against all forms of authority and domination. Specifically, Alfredo and Anna were accused of being responsible for the double explosive attack against the Scuola Allievi Carabinieri in Fossano, on 2 June 2006, claimed by Rivolta Anonima and Tremenda / Federazione Anarchica Informale. For this attack, on 6 July, the Court of Cassation reformulated the sentence to ‚political massacre‘. Life imprisonment is the only penalty the Italian penal code provides for political massacre. After reclassifying the crime, the Cassation sent the case back to the Court of Appeal to redetermine the convictions. The hearing that will decide the extent of these sentences is set for 5 December in Turin.
The Italian state, which has always protected the fascist strategy of mass murder, now wants to convict two anarchists of massacre for an explosive attack that caused neither victims nor injuries.
This affair breaks into the increasingly dark repressive climate with which we all have to deal: that is why the struggle of Alfredo, Juan, Ivan, Anna and Toby is close to the heart of those who do not want to resign themselves to a world that is more and more an open-air jail.

We call for 30 November (the day before the re-examination of the 41 bis measure against Alfredo), a day of action in solidarity with Alfredo and the other comrades on hunger strike.
Let us make them feel our solidarity that breaks the isolation beyond all borders and all cages. Let us break the deafening silence in which they want to bury our comrade alive. Let us give voice to our comrades‘ struggle with our actions.
Let us make the symbols of oppression and exploitation the targets of our actions. Targets are everywhere. Every action is necessary: whether it is spreading the ideas of anarchist hunger strikes or sabotaging and disrupting the normal functioning of the state and capital. Target the Italian, German or any other state and the symbols of domination to abolish the prison system!
Let us show that solidarity is a dangerous weapon…

Presidium at DNAA on September 30 in Rome

END_OF_DOCUMENT_TOKEN_TO_BE_REPLACED

This writing stems from the need to explain to comrades what will happen after the Cassation ruling for the Scripta Manent trial issued on July 6.

Starting with the most serious convictions, the court requalified the explosive attack against the Carabinieri’s student school in Fossano(Cuneo) on June 2, 2006 and claimed by Rivolta Anonima e Tremenda / Federazione Anarchica Informale as a “political massacre” (art. 285 c. p.), referring the case back to the Turin Court of Appeals for a peggiorative recalculation of the sentence with the risk of life imprisonment for comrades Alfredo Cospito and Anna Beniamino.

In addition, all other convictions handed down in the Court of Appeals were upheld with sentences ranging from 2 years and 6 months to 1 year and 6 months for 11 comrades and acquittals for the rest of the defendants.

The convictions and acquittals as of now are final.

END_OF_DOCUMENT_TOKEN_TO_BE_REPLACED

The hearing of the Scripta Manent trial took place on July 6 at the Court of Cassation (Supreme Court). The court reclassified the facts of the explosive attack to the Carabinieri students school in Fossano (Cuneo) on June 2, 2006, claimed by Rivolta Anonima Tremenda – Federazione Anarchica Informale, for which Anna and Alfredo were prosecuted, in “massacre & political” (art, 285), returning the process to the court of Torino for the punitive recalculation of the sentence. All the other sentences were confirmed, between 1 year and 9 months and 2 years and 6 months, for 11 comrades, and the acquittals for the rest of the defendants, which thus become definitive.

There will come times for more detailed reflections. What does seem evident to us is the determination of the State to break the anarchist movement and the revolutionary struggle, making even worse what happened before the Court of Assise (National Court) of Turin, with a sentence that does not seem to presume any margin for criticism. While the contradictions on which society is governed become more and more unmanageable, before the social tension takes forms that the power does not know how to manage, the State tries to give a blunt blow to the movement and a warning to those who do not desist: two or three years for those who publish a newspaper, dozens of years or even life imprisonment for those who act.

The recent decision to lock Alfredo up in 41 bis, shamelessly taken, moreover, on the eve of this sentence, is perfectly qualified in this State reprisal: the decisions have been taken, Alfredo has to stay buried, literally, in prison. His ideas, his actions, his contribution must be silenced, condemned to oblivion.

But forgetting the prisoners of the social war means forgetting the war itself: revolutionary solidarity with the anarchists Anna Beniamino and Alfredo Cospito. Death to the State and capital, long live anarchy.

The addresses of the imprisoned comrades: