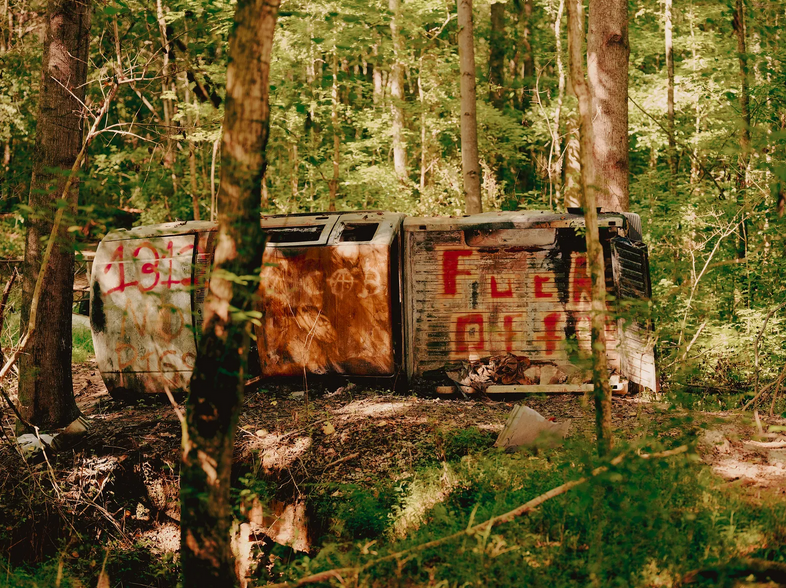 A protester was shot dead Wednesday morning and a Georgia state trooper was shot near Atlanta’s Stop Cop City encampment.

From ‘Defend the Atlanta Forest: “Police killed a forest defender today, someone who loved the forest, someone who fought to protect the earth & its inhabitants. This is why we organize to stop Cop City. And we will. In honor of their life, and the lives of everyone killed and imprisoned by the police.”

Defend the Forest & Stop Cop City is a grassroots movement of many groups and individuals from Atlanta and beyond, working together and separately to prevent the South River Forest from becoming either a police training compound or a new Hollywood soundstage complex.

Atlanta Police Foundation is trying to build the largest police training facility in the US in Weelaunee or South River Forest, a watershed. The plans include military-grade training facilities, a mock city to practice urban warfare, dozens of shooting ranges, and a Black Hawk helicopter landing pad.

On the heels of the historic 2020 uprising following the murder of George Floyd by the Minneapolis Police Department, the current movement inherits all of the wisdom and ingenuity of those unforgettable days. After millions marched, demonstrated, and took action against police brutality, the Atlanta government and countless others found creative ways to give local law enforcement even more resources and funds, under the cover of “reform” and “trainings.”

The South River Forest, one of Atlanta’s largest remaining green spaces. The forest encompasses a three-hundred-acre, city-owned tract of land that sits in a poor and predominantly Black part of unincorporated DeKalb County. Underground are the much older remains of the Muscogee Creek people, who lived in what they called the Weelaunee Forest until they were forcibly removed by white settlers in the eighteen-twenties and thirties.

The plans for Cop City have been met with exuberant from forest defenders and the broader community.

At the end of July, someone set fire to a truck that had hauled construction equipment to a trailside parking lot. On its charred remains were scrawled the words “No Cop City” and “No Hollywood Distopia.”

A CALL FOR RETALIATION

The worst has come to pass.
An unnamed forest defender has been shot and killed in Weelaunee.
Consider this a call for reciprocal violence to be done to the police and their allies. On Friday, January 20th, wherever you are, you are invited to participate in a night of rage in order to honor the memory of our fallen comrade. 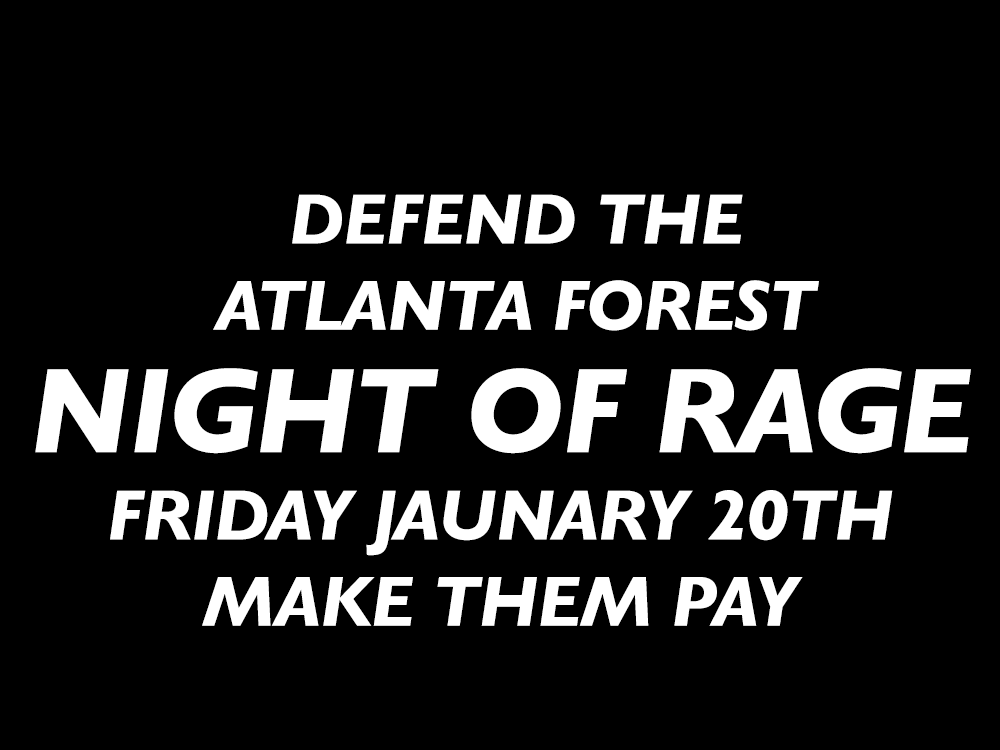 On 22 October, uniformed assassins of the DIAS, detect a stolen vehicle in the neighbourhoods of Piraeus and pursue it. At the same time that the vehicle is trapped and immobilized, surrounded by numerous and armored police forces, the cops raise their guns and shoot in cold blood with 38 bullets 18-year-old Nikos Sampanis. Typically brought into the arms of civil justice are 7 cops involved in the murder, who under the blessings and praise of the Minister of Uniformed Killers himself, Theodorikakos, are released. The operation is a complete success. Score – one dead for one stolen vehicle.

From propaganda to praxis

Justice is a revolutionary affair and comes like the Sword of Damocles on your heads. As a minimum first retaliation for the previously announced murder of Niko Sampani, we take responsibility for the explosive attacks with low-powered devices on the houses of two bounty hunters in uniform, Lefteris Gatos at 19 Graziou Street and Dimitrios Daggli at 45 Olympiad Street, in the early morning hours of November 15th in Thessaloniki. Our attacks took place a few hours after a new outrageous event came to light: the arrest of yet another uniformed man for indecent assault on his 4-year-old daughter. We had made it clear that nothing goes unanswered, let alone a murder. And while incidents of police brutality are increasing by the day, passive waiting is not one of our characteristics. We go on the offensive again by publicly stating that as of today the bounty list has 19 more unpunished scumbags (with no guarantee that the above two will not be re-targeted in the future).

To cut the laughter…

Last July, we proceeded to put a public bounty on 21 hired killers of the Greek Police, showing you a small but not insignificant sample of our own factionalism in the face of your impunity. And we saw the fear and terror in your eyes when you took Tsairidis from channel to channel crying and begging justice for protection. A few months later, our deeds complement our words. As long as you are unpunished, you are unprotected. History itself has shown that murderers and torturers will always meet the punishing hand of revolutionary violence, of true justice. That is why our attacks on the political descendants of the junta’s torturers, a few hours before the anniversary of the ’73 uprising, are a tribute to the memory of the dead of the Polytechnic. END_OF_DOCUMENT_TOKEN_TO_BE_REPLACED 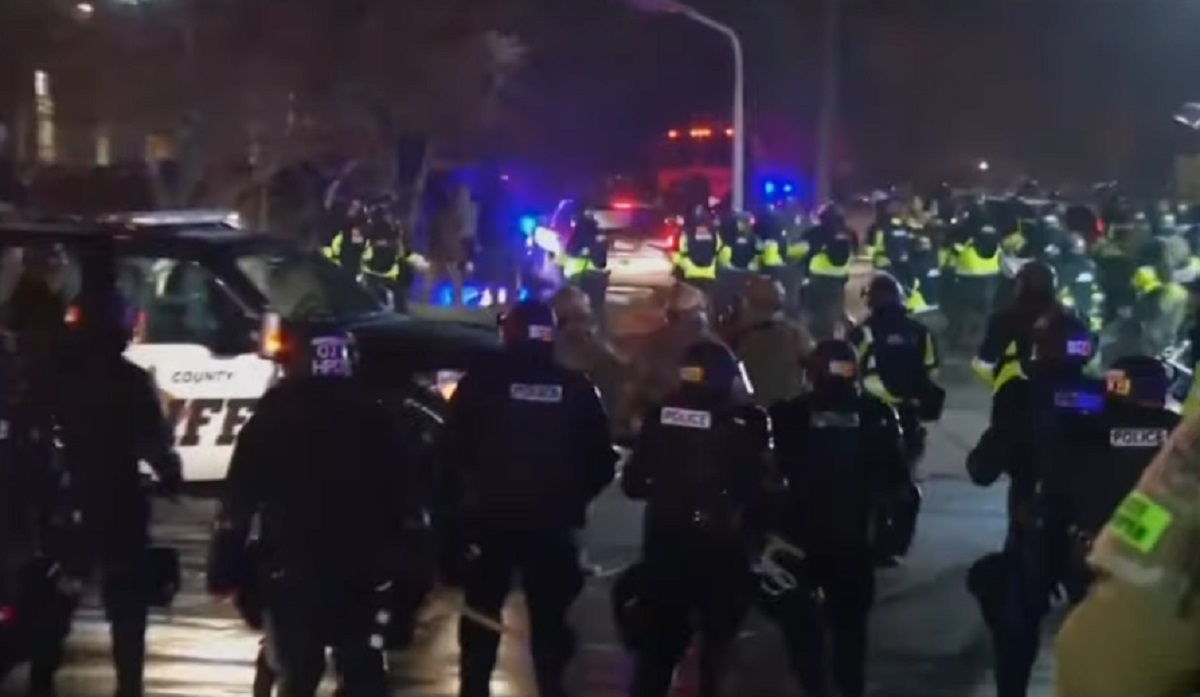 Originally published in Anathema, an anarchist publication from Philadelphia, the following interview talks about the realities of the Brooklyn Center riot that kicked off in the wake of the police murder of Daunte Wright in the spring of 2021.

Although the Brooklyn Center riot was an outgrowth of the George Floyd uprising, it was also a reminder that the previous summer’s events would not be repeated. Now, after a relatively quiet summer, it seems all the more important to be looking toward the future rather than fixating our gaze on last summer’s uprising. In this interview, we explore some of the developments and unique characteristics of uprisings in the aftermath of the George Floyd uprising.

You were in Brooklyn Center in April. Can you describe what happened?

Yes, there was a police murder: Daunte Wright, 20 years old. He was basically trying to flee the scene where he got stopped. There was two nights of rioting — I am going to say rioting. Some people want to say “it’s not a riot, it’s a rebellion.” I am just going to say it was a riot.

People were throwing stuff at the cops. There was looting by car in the Brooklyn Center area, also in Minneapolis and surrounding suburbs. The first night the neighboring police station got shot up; someone shot the front doors of it. Someone else shot at a cop — maybe 3 days after it started.

All throughout people were calling for the burning down of the police precinct (that was the focal point of the riot). They never succeeded. People tried. The police set up a gate. It was similar to what happened in Portland at the courthouse. But they didn’t actually breach the gate.

After the first two days of looting, arson, street fighting, and property destruction, there was basically a week of confrontational protests in front of the police precinct. END_OF_DOCUMENT_TOKEN_TO_BE_REPLACED

On July 1 at dawn in the area of Gyzi on Chaldari Street, we carried out an arson attack on the Ford dealership. As a result, at least two vehicles and the front of the company were burnt to the ground.

The choice of this particular target was not accidental. This is an American giant with branches throughout the world that has played a dominant role in the global capitalist scene. In particular, its founder Henry Ford in 1913 introduced a model of work organisation in which workers perform a set of identified movements, repeated over many hours. The work of the one cut off and alienated, as a stone of the production set, influences the work of the other in chains, raising the intensity and rhythm of production and work. Moreover, the possibility of refusals and resistances during work is reduced, since all the workers’ movements are dependent and form a chain. This has been a historical form of repression and surveillance of workers.

Fourth, Ford’s relationship with the US cops is widely known. It is one of the companies that has reinforced the repression carried out by the US state by providing equipment and vehicles. Even in Greece, in Laconia, Ford Motor Hellas has provided a vehicle worth 48,000 euros for the needs of the cops of the OPKE for the second time. The Mayor of Sparta has excellent relations with this company while the deputy mayor Thanasis Karlaitis former cop, he stressed: “hopefully other agencies will follow Ford’s example for the benefit of the citizens”.

A year before the lines of this text, George Floyd was abused to death and murdered by US cops. Savage conflicts break out across much of the USA with the main expression being the oppression of the African-American community and beyond. Protests break out internationally from country to country. In Greece diverse actions are taking place. For our part, one year later we keep the flame and the memory alive for the dead and the oppressed of our class. Wanting to bring back the energies of then with today. END_OF_DOCUMENT_TOKEN_TO_BE_REPLACED