During the night of May 25 in the southern city of Puerto Montt, a roar shook the 8th Police Station of Special Forces, now renamed COP (Public Order Control) to clean up its image.

The prosecutor of the area, Myriam Perez, ordered the concurrence of specialized personnel to the place, that is to say GOPE, Labocar and OS-9 personnel. For her part, Giovanna Moreira, presidential delegate of the Lo Lagos region confirmed the filing of a complaint, stating: “we will not tolerate violent actions that endanger people”.

The action was vindicated via email to different counter-information media by “Negra venganza. Núcleos de Melipulli Jose Huenante, responding to a call pointed out in a past attack against gendarmerie in December 2021.

We respond to the call of the comrades of the north ”The black vengeance”.

The night of MAY 25, 2022 we left an explosive surprise in the special forces police station of Melipulli (Puerto Montt).

Almost 17 years have passed since that night when they took Jose, a young settler with the last name of Huenante, a young Mapuche who was disappeared by the Chilean Carabineros.

Almost 17 years have passed and today in a gesture of memory and revenge we are attacking one of their hideouts.

This month has a special significance for those who choose the path of action and confrontation, in this BLACK MAY, we remember and embrace the memory of our comrade and brother Mauricio Morales.

We want to embrace the memory and coherence of comrade Luisa Toledo, who always stood by the side of those who choose the path of social war.

We salute the brothers and sisters of the Wallmapu who resist the attempts by the State to suffocate the insurrectional flame throughout the territory and stand up to extractivism and capital.

A fraternal embrace to Felipe Santana, to the Mapuche political prisoners, anarchists and subversives.

Against the advance of capitalism and the prison state.

For revenge and Anarchy.

In November 2020, an explosive package explodes in the Talca police station, slightly injuring a policeman. The action is claimed by “Entes sin Rostro, nada ni nadie que ustedes conozcan” (Faceless Entities, nothing and no one you know).

In May 2021, in a large operation, the police managed to capture Luis and Ignacio Avaca, after the investigation carried out by OS-9 personnel and the South Prosecutor’s Office. The comrades – twin brothers – were taken to the Talca prison and then transferred to Rancagua while the investigative process was underway.

In January 2022, both were able to reach an abbreviated procedure under the anti-terrorist law, that is, to assume responsibility in exchange for a sentence agreed with the prosecution.

This is how the comrades assume the action (We are responsible. About our participation in the fact that we are accused and take political responsibility) and get to be sentenced to 3 years, a sentence that after months of imprisonment, they will continue to serve in the street.

No repentance!
Good road to comrades Ignacio and Luis, in the street!
Solidarity with those who attack the police and arm themselves in their denials!

Extract from the judicial declaration of anarchist comrade Francisco Solar taking responsibility for sending explosive packages to the 54th station of the carabineros [Federal Police of Chile] and against the former Minister of the Interior, Rodrigo Hinzpeter in July 2019, action claimed by “Cómplices sediciosos/Fracción por la Venganza” [Seditious Accomplices/ Vengeance Faction] and for the double attack on the Tánica building on February 27, 2020, in the midst of the revolt, action claimed by “Afinidades Armadas en Revuelta” [Armed Affinities in Revolt].

(…) In November 2017, our idea was to move away from the big cities, mainly Santiago, because of its frenetic way of life, and to start a self-sustaining project. Although I opted for that way of life, I did not stop thinking that the most appropriate way to fight against an overpowering system based on authority and predation is through violent revolutionary action. Only from this is it possible to achieve moments of destabilization that, even if they are fleeting instants, reveal the vulnerability of power

In the middle of 2018 I decided to start pursuing that kind of action (…) Once I made that decision I started to think about some target, being clear that if I was going to take a great risk, the action had to be powerful. I thought of carrying out an action as a response, as revenge against people linked to repression and business power. Both criteria were fully met by Rodrigo Hinzpeter, who in 2019 was manager of the Quiñenco group, whose president is Andronico Luksc. Hinzpeter had also been Minister of the Interior under the first government of Piñera, leaving a trail of repression that will be difficult to forget. He harshly repressed social and student mobilizations, trying to pass a law marked by prohibitions of all kinds, known as the Hinzpeter Law. As Minister of the Interior he was politically responsible for the murder of young Manuel Gutiérrez, harshly repressed the social mobilizations in Aysén and Freirina, militarized the Mapuche territory, resulting in hundreds being wounded, many of them children, and countless prisoners.

END_OF_DOCUMENT_TOKEN_TO_BE_REPLACED

During the early morning of Monday, December 27, 2021, a loud bang shakes the center of the capital. An explosive device detonates against a window of the National Directorate of Gendarmerie, located on Rosas Street at the height of Teatinos.

GOPE personnel quickly arrived at the scene, and the South Prosecutor’s Office, which handles this type of crime, was present, entrusting the OS-9 and Labocar personnel with the investigation. According to the press, it was the Prosecutor’s Office itself which indicated the prohibition to inform and give more information. No pamphlets were found at the site.

Via email, the action is claimed by “La Negra Venganza”, which according to the text would be the same group that acted against a police station in 2020. The text details the use of industrial explosives, as well as ammunition in the explosive device, making an open call to expand this type of practice, to show solidarity with the prisoners and to expand the use of their name, and finally to greet other action groups.

Campaign of attack and revenge against the executioners. Act II

Explosive attack to the National Directorate of Gendarmerie of Chile.

“In a highly self-critical manner, the solidarity actions that are undertaken are generally reactive. There are no actions that are rather offensive… We all know where the guys are, they are walking around in their uniforms, and they do it with total impunity. And we know that inside they are harassing the brothers and sisters, they are making them feel bad, they are humiliating them…”

One year after our first action, as the group that we are, and after much study, tensions, proposals and reflections, we are back. We are back, we continue with the campaign we started some time ago.

We will go in the early morning of December 27, 2021 a few minutes before the clock strikes 3:00 a.m. (The time and day are always proposed, so that the attack in its entirety reaches our targets-enemies) To the National Directorate of Gendarmerie of Chile. Located in Rosas street, downtown Santiago. END_OF_DOCUMENT_TOKEN_TO_BE_REPLACED

The thread of social struggles unfolds and widens the historical circle. The revolutionary act takes the consciousness one step further. It opens up paths against oblivion, devaluation, fragmented and incomplete historical-social memory, flattening and fascism. In the perpetual cycle of social struggle, actions form consciences and consciences form revolutionary strategy. Similar to the drying out, torture, executions and terrorism of yesterday, the regime today continues to embellish the same practice. It murders, imprisons, beats, beats up, files, terrorizes. The pandemic is an opportunity for the new idiots and modern lepers.

Then and now the answer must be the same. We attacked at dawn on Sunday 5/12 at the police station in Zarouchleika, Patras, on the one hand to honour the memory of Alexandros Grigoropoulos and on the other hand as a minimum for the recent murder by the state dogs of Nikos Sampanis.

We wink at all those who feel cheerful at the sound of such actions. Solidarity and strength to the two men in custody for a similar attack. War now and always on the state and the bosses.

..art with fires,the glow of love is here,the world is not won by prayers…. 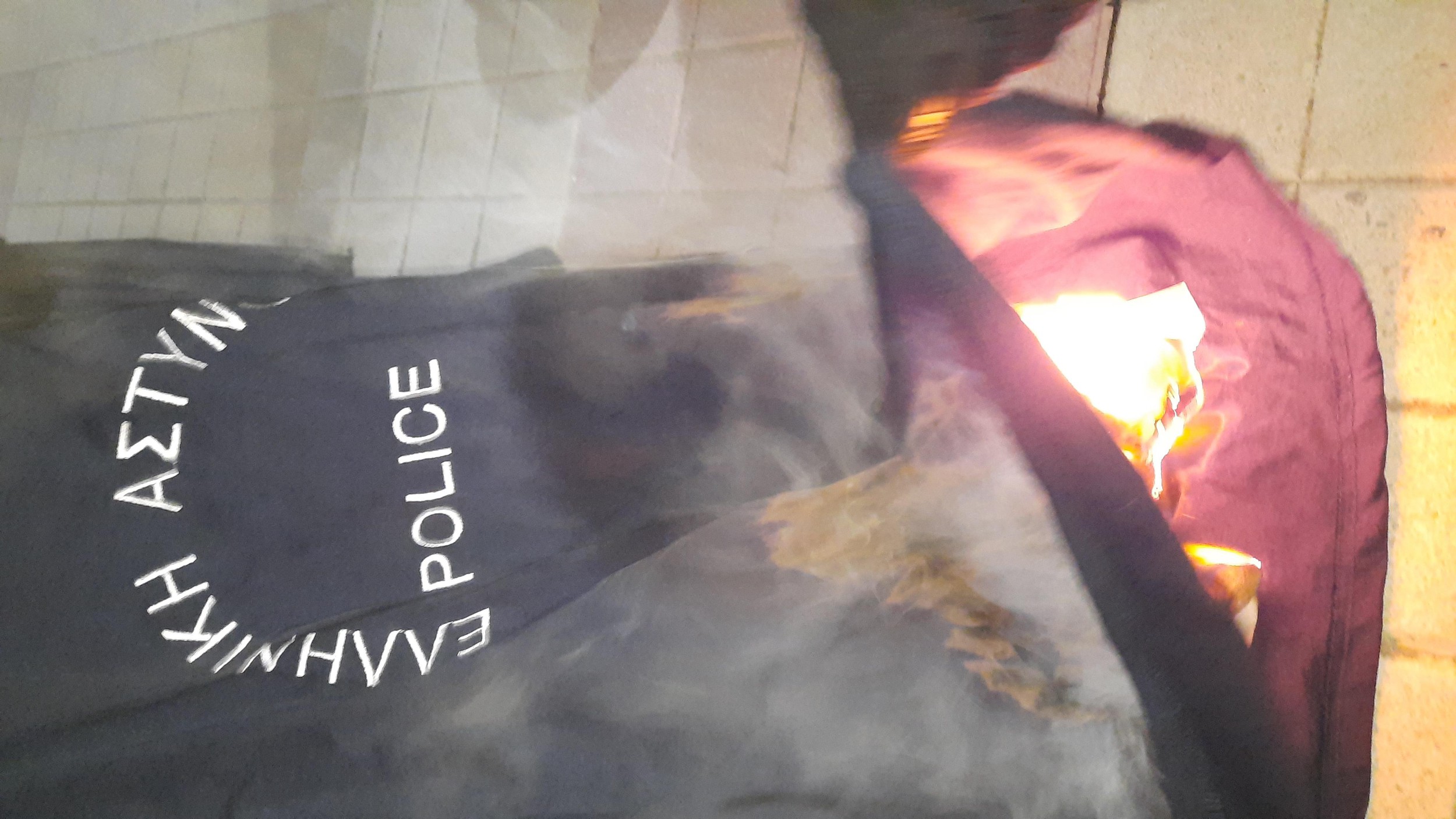 10 March 2021 we set up an ambush with bins waiting for the cops in the Aguia area. When we saw them from a distance of 20 meters, we came out of the school and threw stones, and 2 molotov cocktails, the police car put the car directly into reverse and left the area, later a DIAS team chased us but lost us in the alley. A cop on the street also got hit by a fire from a balcony and then we burned his shirt.

P.S. Flame, you idiot, watch your mouth. 5 times we’ve chased you and once we beat you if you remember correctly back in the 4th E.P.A. when you walked in and then ran and hid behind cops.

All Fascist Are Cops

We haven’t said the last word yet, these are Alexi’s days.

It is not remembrance, or melancholy nostalgia. It is the very idea of rebellion against our oppressors and exploiters. It is the fiery flame of yesterday that drives the gestures of resistance of today.

It is not a desire for repetition, but the very reality of exploitation, death politics, totalitarian control, segregation and total state management of the pandemic.

It is the intensity of oppression, of the suffocating present that arms us with the will, the desire, the strength to attack the state apparatus. It is the December 2008 uprising that fills us with the faith that the situation can and must change, that those from below can come back to the forefront by claiming their own lives.

The murder of comrade Alexandros Grigoropoulos on December 6, 2008 by the cops Korkoneas and Saraliotis sparked an uprising in the whole of Greece. Large sections of society appropriated the slogans, the proclamations and the practices of the anarchist space and took to the streets against everything that oppresses and exploits us. END_OF_DOCUMENT_TOKEN_TO_BE_REPLACED

Cops all over the world have the function to detect the smallest rebellion against the system of capital, against the system of patriarchy, to press it into the logic of criminal law (i.e. to present it as non-political), to discredit it and to appropriate it. In the struggle for interpretive sovereignty, their goal is to control and crush this rebellion, with visible or subtle violence, depending on the balance of power and the form of government.
In this sense, the system of subjugating every element of our lives to the standard of norming and hierarchization according to property, body, religion, gender, origin, and attitude that prevails everywhere is manifested.
Their use cannot be judged in the categories of unjust or unjustified. The institutionalization of the police has never been about justice. The police are a system of domination and any narrative of humanity behind the uniform serves only to obscure social conditions. END_OF_DOCUMENT_TOKEN_TO_BE_REPLACED

One year after the assassination of Javier Ordoñez, a student, by the police, a police station was attacked and three cops were injured in the Brasilia neighborhood of Bogotá on Wednesday, September 8, 2021.

Organized groups of revolutionaries fought against the public force, burned tires and closed roads in the south and north of the city.

A police motorcycle was also incinerated in the uprising.